Ben Stokes' third ODI hundred propelled England to a 40-run win over Australia on the Duckworth-Lewis-Stern method at Edgbaston to send the 50-over world champions crashing out of the tournament at the group stage.

At that point rain returned for the second time with England well ahead of the DLS par score of 204 to wash away Australia's survival hopes and send Bangladesh through to the semi-finals, Steve Smith's side having suffered two previous abandoned matches due to bad weather.

Morgan and Stokes pummelled seven sixes and 21 fours between them as Australia, who had to win the game to progress to the last four after Bangladesh's victory over New Zealand on Friday, wilted against an outstanding display of power-hitting.

Stokes brought up his 39-ball fifty with a flat six off Mitchell Starc (1-52), before Morgan reached his in 12 more deliveries having walked to the wicket bristling with intent despite the early loss of Jason Roy (four) and Alex Hales (nought) to the new ball.

Morgan enjoyed one life when he was dropped on 14 by wicketkeeper Matthew Wade after gloving Josh Hazlewood down the leg-side but remained unflappable, going quickly back on the offensive after a 40-minute break for rain following the departure of Joe Root, caught behind for 15. 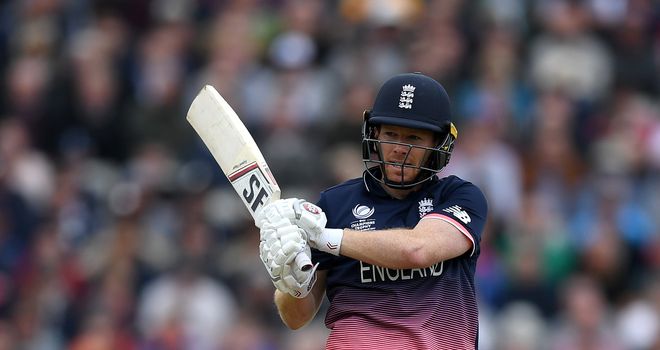 Against the backdrop of England fans chanting 'Australia are going home', the boundary onslaught was relentless - Morgan's fifth maximum making him the leading six-hitter in the tournament before he was guilty of ball watching and run out by Adam Zampa's direct hit.

Jos Buttler might have gone for 12 had Glenn Maxwell not lost sight of a straightforward chance at backward point off Starc but cashed in, sharing an unbroken 46-run stand with Stokes who posted his first Champions Trophy off 108 balls courtesy of a cut four off Zampa.

He barely had time to celebrate before bad weather closed in to bring the match - and Australia's tournament - to a premature close.

Australia simply didn't have enough runs to play with despite an unbeaten 71 off 64 by Travis Head, as England restricted the visitors to 277-9 - Mark Wood returning career-best ODI figures of 4-33 and Adil Rashid picking up 3-4 in 10 balls to finish with 4-41. Aaron Finch (68 off 64) found the middle with increasing regularity after a scratchy start and added 96 for the second wicket with Smith (56 off 77).

But from 136-1, Australia failed to surge to the 300-plus score in their sights as Finch skied Wood to Morgan in the covers and Moises Henriques (17) picked out mid-on off Rashid after a promising start.

Smith looked livid at the wicket but was culpable himself, chipping Wood to mid-off and from 181-4 the onus fell on Head to carry the innings as wickets fell around him. 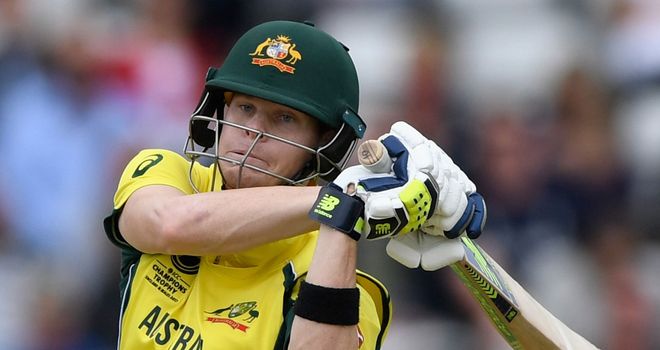 Australia's middle and lower order, batting for the first time in the tournament, folded after Jason Roy pulled off a blinding boundary catch to send back Glenn Maxwell (20).

The Surrey batsman held his nerve to take a tough chance right on the deep midwicket boundary, having the awareness to throw the ball in the air as he stepped over the rope and re-take it in-field.

From 239-5, Australia slumped to 254-9 as Rashid's wrong 'un wreaked havoc - Matthew Wade and Pat Cummins chipping back return catches and Starc caught off a leading edge.

Wood bagged his fourth when Zampa missed a fast full toss on off-stump and although Head heaved Ball into the stands, then took 12 off Stokes' last over, England were in the ascendancy.

Live coverage of the ICC Champions Trophy continues on Sky Sports 2 at 10am on Sunday when India take on South Africa for a place in the semi-finals.