England bowled Australia out for just 214 before surviving two mini batting collapses to record a three-wicket win in the opening ODI of the five-match series.

The spin bowling duo of Moeen Ali and Adil Rashid did the bulk of the damage with the ball, sharing five wickets and bowling with impressive discipline before a fourth-wicket stand of 115 between Joe Root (50) and Eoin Morgan (69) kept England in control during the chase.

The pair fell within four overs of each other, with Jos Buttler dismissed in between, to give Australia a glimmer of hope but that soon faded and David Willey and Liam Plunkett saw England home with six overs to spare at the Oval.

England's bowlers took the brunt of the criticism after the surprise defeat to Scotland but they provided the ideal response, Willey (1-41) setting the tone as his hooping delivery was edged to Jonny Bairstow at first slip by Travis Head (5).

Moeen Ali (3-43) was introduced late in the powerplay and had Aaron Finch (19) caught in his first over before bowling Shaun Marsh (24) in his second, just as the pair's partnership was starting to grow.

The off-spinner then had Aussie skipper Tim Paine (12) caught reverse-sweeping before Rashid's googly was nicked behind by Marcus Stoinis (22). 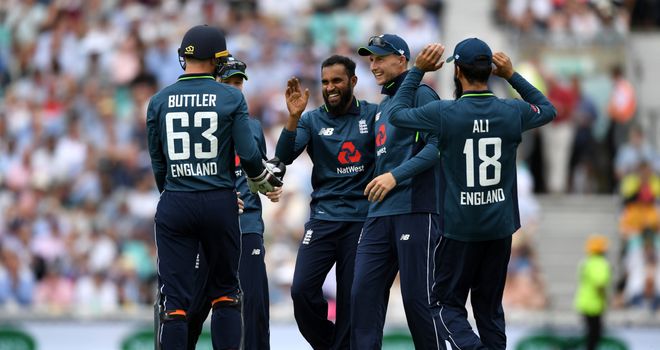 Glenn Maxwell (62) inserted some impetus into the Australian batting in a partnership of 84 with Ashton Agar before pulling tamely to Bairstow in the deep off Plunkett.

Rashid (2-36) returned to trap Agar (40) lbw and from there the Australia innings ended quickly, Mark Wood (1-32) removing Kane Richardson (1) with Plunkett (3-42) ousting debutant Michael Neser (6) and wrapping up the innings in the 47th over with the wicket of Andrew Tye (19).

Even with such a modest total to chase, England nerves will have been jangling slightly when the towering figure of Billy Stanlake bowled Jason Roy (0) second ball and Neser then got Alex Hales (5) lbw.

Bairstow (28), looking for a fourth ODI century in as many matches, started brightly but somewhat gifted his wicket to Australia as he smashed a long hop from Richardson straight to Head at deep square leg. 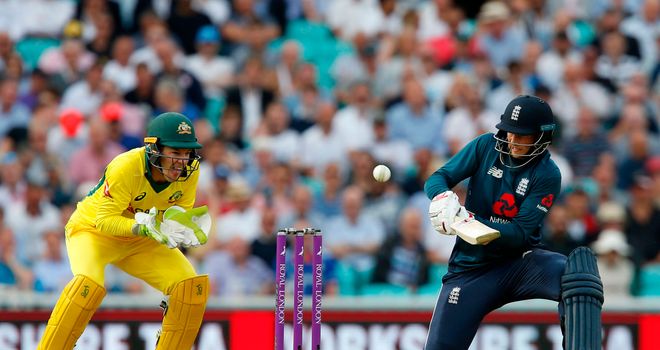 Root and Morgan batted England out of trouble though, showing patience where necessary while keeping the score ticking over at a decent rate.

However, just when it seemed the pair were to guide England comfortably over the line, an under-edge from Morgan carried through to Paine, Tye making the breakthrough.

Jos Buttler came in and thumped four over the top but was then given a life when Paine slipped a spiralling catch as the England wicketkeeper tried to hook Stanlake.

He could not make it count though as he mistimed another lofted drive to mid-on in the next over to give Tye (2-42) his second and when Root edged Stanlake (2-44), Australia's most threatening bowler throughout, behind in the fast bowler's final over, England were wobbling again with 52 more still required. 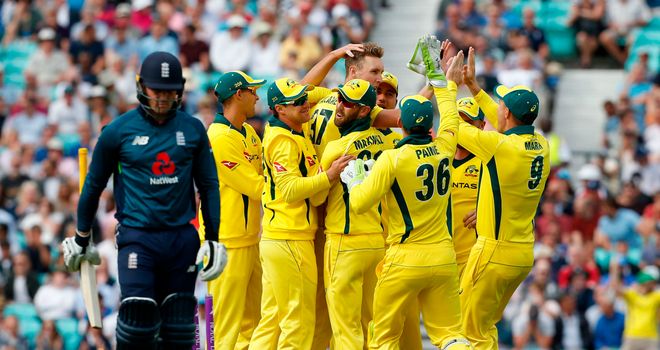 Ali and Willey whittled that down to 18 before Ali (17) picked out sub fielder D'Arcy Short on the midwicket boundary with a pull shot off Neser.

England then crawled their way to within sight of the finish before Willey (35no) finished it in style, smashing a straight six back over Neser's head.

England captain EOIN MORGAN: "I'm very pleased, particularly with the bowling. Like I said up in Scotland, I think we were better for playing that game - it kicked us in to touch a little bit and hone our skills - and we certainly took the lesson from it. I thought our bowlers did an amazing job today. The two spinners, when they came on, it really did turn the game in our favour. Moeen and Rashid have been a great combination for us over the last few years, and today was no different."

Australia skipper TIM PAINE: "I thought our bowlers did a terrific job, we just let them down as a batting group. We gave a few wickets away, there's no doubt about that - we'd like to have our first 15 overs today back. You win one-day games by your top four or five getting the job done. Today they didn't. When you're defending 214 against the No 1 side in the world, you're not going to win all that often."