England broke their own ODI world record by smashing 481-6 during a series-sealing, 242-run victory over Australia at Trent Bridge.

Alex Hales (147 off 92) top-scored, while Jonny Bairstow (139 off 92 balls) cracked his fourth ton in six ODIs as England bested the 444-3 they amassed against Pakistan at the same venue in 2016 - Hales taking them past their previous best with a six off Jhye Richardson in the 46th over, one of a record 62 boundaries the hosts hit (41 fours and 21 sixes).

Australia, who elected to bowl, had no answer to England's brutal batting as the hosts passed 350 for the 11th time since their dismal showing at the 2015 World Cup and 400 for the third time, with Jason Roy contributing 82 from 61 balls and fit-again skipper Eoin Morgan hitting 67 from just 30. 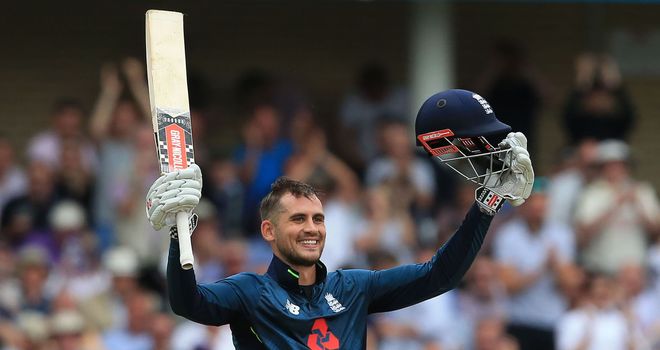 Alex Hales helped England to a new world record, having starred in 2016 when they set the old one

Morgan - who missed Saturday's second ODI in Cardiff with a back spasm - overtook Ian Bell as England's highest ODI run scorer when he passed 41 and then completed his nation's quickest fifty in the format, from just 21 deliveries, during a superb display of hitting which left 500 looking possible.

Shell-shocked Australia were then skittled for 239 in 37 overs in reply - opener Travis Head (51) the only man to pass fifty as Adil Rashid bagged 4-47 - to slip to a 14th defeat in their last 16 completed ODIs and back-to-back series losses to England, having been humbled 4-1 over the winter.

England, toasting a seventh ODI series victory in a row after recording their biggest win in the format and inflicting Australia's heaviest defeat, will now hope to wrap up a whitewash by winning the final two games of the five-match series at Durham on Thursday and then at Old Trafford on Sunday

Roy's 120 had helped England take a 2-0 lead in south Wales at the weekend and the Surrey star looked set for back-to-back tons in Nottingham before he was run out by D'Arcy Short attempting a second having put on 159 with fellow opener Bairstow in under 20 overs.

That dismissal did not stem the carnage, though, with Hales - on his home ground and where he blitzed 171 against Pakistan two summers ago - and Bairstow slamming 151 for the second wicket before Bairstow was caught in the deep off Ashton Agar (1-70) two runs shy of his ODI best 141, which he struck against Windies at Southampton in 2017.

Hales went on to seal his century from 62 balls, beating Bairstow's 69-ball effort, and shared a stand of 124 with Morgan, before Hales and his skipper were caught off successive Richardson deliveries in the 48th over.

Richardson also accounted for Jos Buttler (11) after the wicketkeeper-batsman had been sent in ahead of Morgan with England 310-2 in the 35th over, while Moeen Ali (11) was run out from the penultimate ball.

Ali (3-28) then helped England engineer their first breakthrough when he caught Short off the bowling off Willey at mid-on in the fourth over, and then picked up the scalp of Head when the left-hander inexplicably chipped back to him in the 13th with the tourists' total on 95.

A 52-run stand for the fourth wicket between Aaron Finch and Marcus Stoinis was the only other relative success for Australia as wickets tumbled in the middle overs.

Finch was bowled on the slog by Rashid, while Stoinis was run out by Bairstow from deep square after Glenn Maxwell called for a risky second as Australia's one-day woes continued - Rashid wrapping up proceedings by having last man Billy Stanlake stumped.