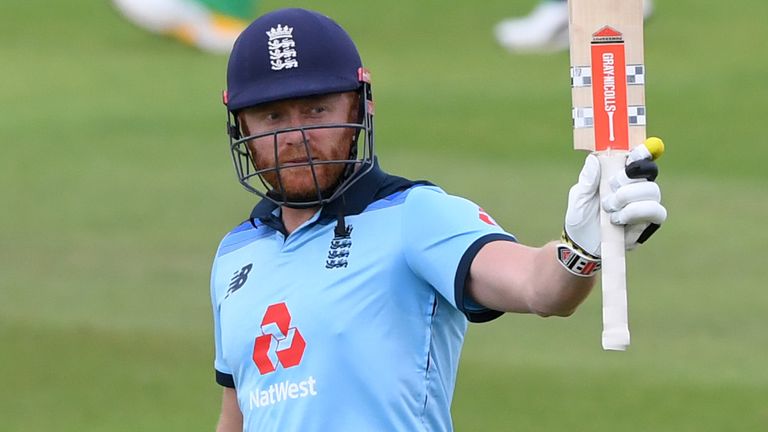 Highlights from Southampton after Jonny Bairstow smashed 82 from 41 balls in England's four-wicket win over Ireland in the second ODI.

Jonny Bairstow was in blistering form as England overcame a middle-order collapse to beat Ireland in the second ODI and clinch the series win.

With the hosts needing 213 to win at the Ageas Bowl, the opener equalled the record for England's fastest fifty, from just 21 balls, and powered his way to 82 from 41 balls before he was dismissed by Josh Little (3-60).

Eoin Morgan (0) and Moeen Ali (0) quickly followed and having been cruising, England were in a spot of bother at 137-6. However, Sam Billings (46no) and David Willey (47no) battled through that tricky spell, sharing an unbroken stand of 79, and a four-wicket win was wrapped up with 17.3 overs to spare.

Bairstow stole the show with his fireworks with the bat but it was England's bowlers who again set up the win, Adil Rashid the pick of them as he took 3-34, while Reece Topley (1-31) looked sharp as he marked his first international appearance since 2016 with a wicket.

Ireland captain Andrew Balbirnie was hoping for an improved display from his top-order when he won the toss and chose to bat but the visitors found themselves in early trouble again.

After his five-for in the first ODI, Willey did the damage again with the new ball. He trapped Gareth Delany (0) plumb lbw in his third over and had the dangerous Paul Stirling (12) caught at backward point in his next to leave Ireland 15-2.

Ireland's woes with the bat were summed up by the next wicket, Balbirnie (15) caught behind as he tried to pull out of a cut shot, handing part-time medium-pacer James Vince (1-18) his first international wicket on his home ground.

That bowling change worked for Morgan and so did his next, Rashid coming on and bowling Kevin O'Brien (3) through the gate with a sharp-turning googly.

Harry Tector and Lorcan Tucker made starts as Ireland tried to rebuild but both were undone by Rashid, Tector (28) chipping to mid-on before Tucker (21) top-edged a sweep to short fine leg to give the England leg-spinner his 150th ODI wicket.

For the second game running, it was left to Curtis Campher (68) to salvage Ireland's innings and the young all-rounder did just that, batting with real conviction in a stand of 60 with Simi Singh (25) for the seventh wicket and 56 with Andy McBrine for the eighth.

Both were broken by Saqib Mahmood (2-45) and it was left to Topley, returning to the side after a number of injury-plagued years, to dismiss McBrine (24) with the last ball of the innings. 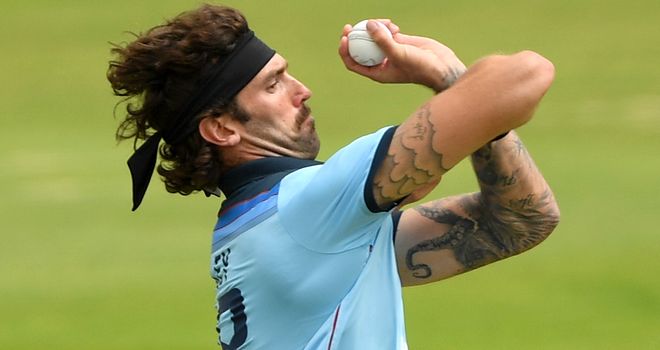 England's reply got off to the worst possible start when Jason Roy (0) fell to Craig Young in the first over but Bairstow settled any nerves in the dressing room as he smashed five boundaries in the next two overs.

The onslaught continued throughout the powerplay and midway through the eighth over, the Yorkshireman launched McBrine over long off for six to match Morgan's record for England fastest half-century.

Vince (16) had started well but had his middle stump flattened by Campher, who then pinned Tom Banton (15) in front to keep the tourists in the game. Bairstow was the one they needed and he was firmly set as he put his name to another England record, the fewest innings to 3,000 ODI runs, matching Joe Root's mark of 72.

A century appeared there for the taking only for an edge behind off Little in the 16th over to bring his fabulous knock to an end.

It appeared nothing more than a hiccup for England on their charge to victory but when Little had Morgan caught in the covers and bounced out Ali in the same over, Ireland were suddenly back in the hunt.

Balbirnie kept the fielders up to put the squeeze on England but, as in the series opener, Billings was a picture of calm while Willey, a genuine all-rounder in the county game, took a rare opportunity to show his prowess with the bat on the international stage. 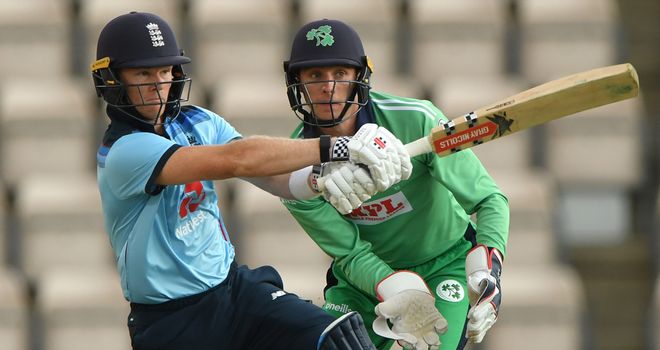 A six, hooked over deep backward square from Willey off Little, followed by back-to-back boundaries in the next over from Campher signalled the end of the Ireland fightback.

Billings kept things ticking over in another classy innings, punctuated by six boundaries, and once the result was beyond doubt, Willey seemed keen to finish it quickly and did just that as he pulled Campher to the fence in the 33rd over to complete the win.

Watch the third ODI between England and Ireland live on Sky Sports Cricket from 1.30pm on Tuesday.