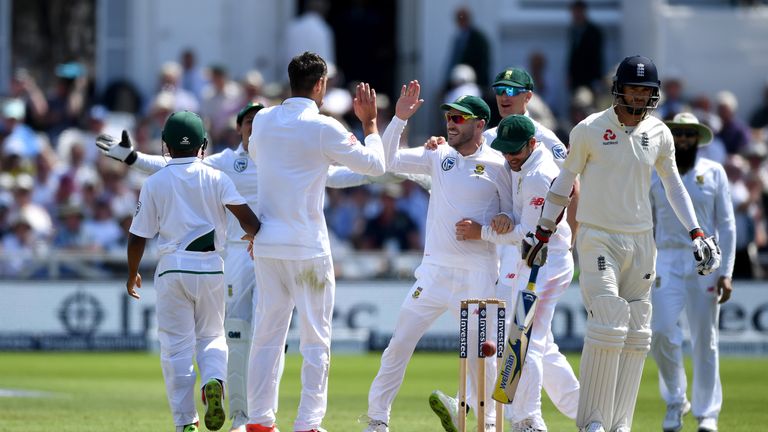 Vernon Philander broke England's spirit as South Africa stormed to a series-levelling 340-run victory before tea on day four of the second Test, at Trent Bridge.

Philander bagged 3-24 in a superb display of seam bowling as the tourists completed a dominant display by dismissing England for 133 in 44.2 overs, who suffered their heaviest loss by runs on the ground.

Set a world-record 474 for a highly improbable victory, England's top order had no answer to South Africa's pace and accuracy before loose shots from Jonny Bairstow (16) and Moeen Ali (27) against Keshav Maharaj (3-42) all but signalled the end, which came on the stroke of 3pm.

Just eight days after losing the first Test by 211 runs, South Africa's turnaround was as quick as it was compelling and owed much to the inspiration of captain Faf du Plessis, back at the helm after paternity leave.

For England's new skipper, Joe Root, defeat uncovers frailties briefly masked by the euphoric response to his perfect start, at Lord's - starting with the top order.

Philander was quickly into his work, bowling out-of-form left-handers Keaton Jennings (three) and Gary Ballance (four) with nip-backers - the former undone by a gap between bat and pad. 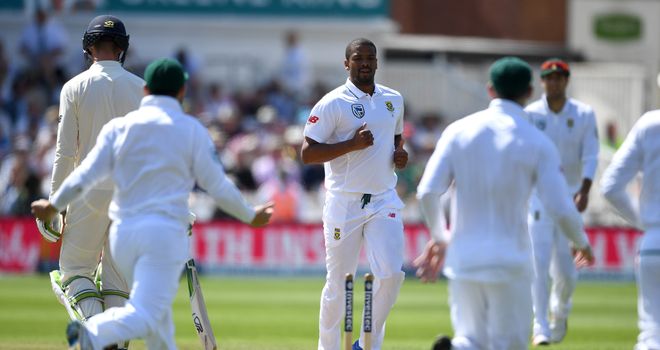 Ballance was the victim of a superb South Africa review - Du Plessis deciding it was worth challenging a 'not out' lbw verdict and the replays showing the ball pitched on leg-stump and straightened enough to hit it.

Root came in and he and Alastair Cook (42) managed to see off Philander and the menacing Mornel Morkel, who somehow went wicketless, only for Chris Morris to come into the attack and produce a cracking yorker beauty to remove the England captain for eight.

Cook had batted doggedly for much of the session but his resistance was ended when Morris surprised him with a quick bouncer, the ball flying down the leg-side off the glove where Quinton de Kock took a fine one-handed catch. 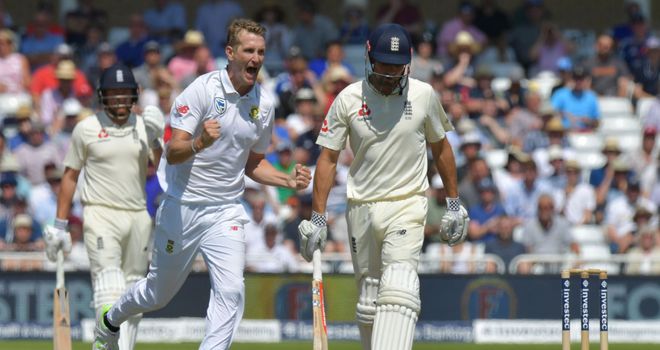 That left England in dire straits at 72-4 and South Africa made the perfect start to the afternoon session when Bairstow advanced and dragged the ball to mid-on as he attempted to hit Maharaj over the top.

Mercurial Moeen Ali went 19 balls without scoring as Morkel and Maharaj maintained probing lines before rousing the home fans with three boundaries in a row off the spinner.

The all-rounder found the rope six times in all before miscuing another attacking shot, sweeping Maharaj to Heino Kun not long placed at square leg.

Philander grabbed his third when Ben Stokes, batting a distance out of his crease to try and minimise the seamer's movement, struck a firm, low return catch back.

Watch the third Test between England and South Africa live on Sky Sports Cricket from 10am a week on Thursday.