Left-hander hits 155 not out before Woakes takes 3-9 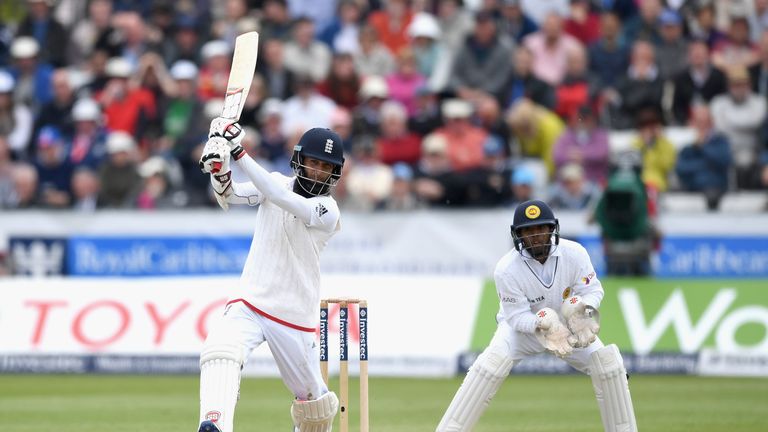 Having been dropped on 36 early in the morning session, the No 7 took full advantage and piled on the runs as England eventually declared on 498-9 in the afternoon session.

From there the bowlers took over and reduced Sri Lanka to 91-8, still 407 behind, at stumps, with Chris Woakes taking 3-9 in seven overs. 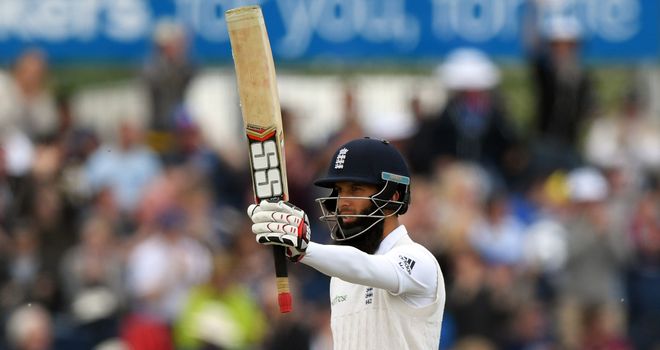 Moeen Ali celebrates his 150 at Durham

Having started the day on 310-6, England had some good fortune as both Ali and Woakes were given early lifelines.

First, Ali sent a thick edge to Dimuth Karunaratne at gully off the bowling of Nuwan Pradeep before a regulation edge from Woakes was completely missed by Dinesh Chandimal behind the stumps - Shaminda Eranga the disbelieving bowler.

The pair made Sri Lanka pay for their slackness in the field and had put 92 for seventh wicket, Ali going past 50, before Suranga Lakmal had Woakes (39) caught behind.

Broad (7) followed - nicking Pradeep through to the keeper - but with Ali going well, England reached lunch at 408-8 and kicked on again after the interval.

Having nurdled his way through the nineties, Ali brought up his second Test century with a lofted drive over mid-off for four and continued in much the same vein thereafter.

Steven Finn (10) provided steady support from the other end before topping edging a Rangana Herath delivery straight up; the left-arm spinner took the return catch to claim his 300th Test wicket but was brought back down to earth as No 11 James Anderson promptly reverse swept him for four.

Ali launched Lakmal for six over midwicket to bring up his 150 and the declaration came soon after with England two shy of 500.

Sri Lanka's openers were left with half an hour to navigate before tea but they were unable to see it through; Anderson bowling Karunaratne behind his legs.

Kaushal Silva and Kusal Mendis kept the runs flowing at a decent rate after tea but a fine low catch from Jonny Bairstow broke their 34-run stand after Broad had found Silva's edge. 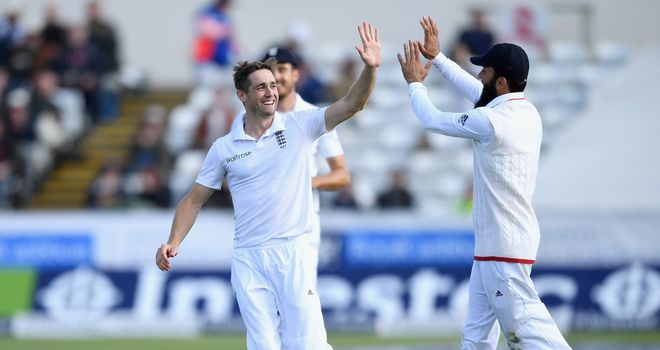 Anderson (2-31) then nicked out Chandimal - Alastair Cook taking the catch at first slip - and a superb spell from Woakes left Sri Lanka in the mire at 67-6.

The Warwickshire all-rounder hit his areas and had Angelo Mathews and Milinda Siriwardana caught behind with Mendis edging a rising delivery to Anderson at gully in between.

Lahiru Thirimanne and Herath dug in for a spell but Broad (3-35) returned to dismiss the latter; Anderson taking another sharp catch at gully and a brilliant one-handed catch from Joe Root - reacting after James Vince was unable to hold on at full stretch - later in the same over did for Eranga, rounding off a near-perfect day for England.

Watch day three of the second Investec Test from 10.30am, Sunday, Sky Sports 2. Before then, you can catch highlights of day two (9.30pm), plus The Verdict (10.30pm) on Sky Sports 2 on Saturday night.