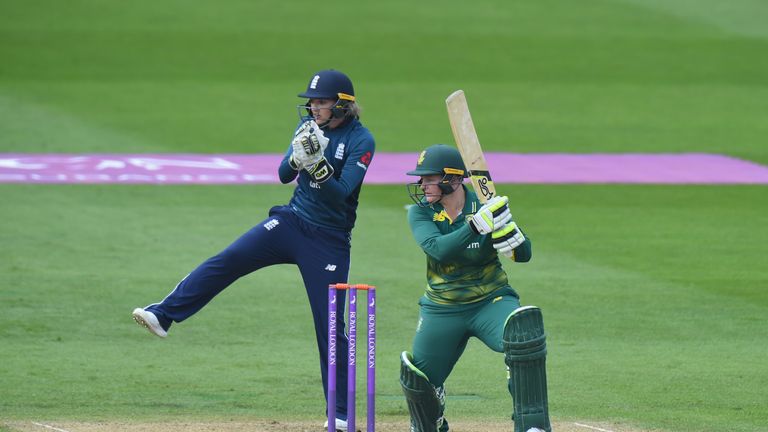 Lizelle Lee top-scored for South Africa with an unbeaten 92

England Women's first game on home soil since their World Cup win at Lord's last July ended in a seven-wicket defeat to South Africa in the series-opening ODI at Worcester.

Heather Knight's side tumbled to 97-8 after electing to bat with the captain (4), Tammy Beaumont (6), Sarah Taylor (2) and Danni Wyatt (7) all falling for single-figure scores, before Katherine Brunt struck 72 not out from 98 deliveries to lift the hosts to 189-9 at New Road.

Brunt then bowled Laura Wolvaardt (2), before Taylor brilliantly stumped Sune Luus (0) down the leg-side from an Anya Shrubsole wide as the Proteas slipped to 5-2 after three overs of their reply.

However, Lizelle Lee (92no) and skipper Dane van Niekerk (58) broke the back of the chase with a third-wicket stand of 113 as South Africa exacted revenge for their defeat to England in the World Cup semi-finals last summer.

Lee was given out caught at long-off by Brunt on 68 and walked off the pitch, only for replays to show the ball had bounced out of Brunt's hands, with the Proteas opener subsequently reprieved by the TV umpire.

Van Niekerk was irate at the initial call, although opposite number Knight will be most frustrated by her side's batting, with Amy Jones (19) and Nat Sciver (16) the only players in the top six to hit double figures.

Shabnim Ismail (3-25) made the first breakthrough for South Africa, bowling Jones off an inside-edge in the fifth over, with Taylor and Knight then trapped lbw by Ismail and Marizanne Kapp respectively. 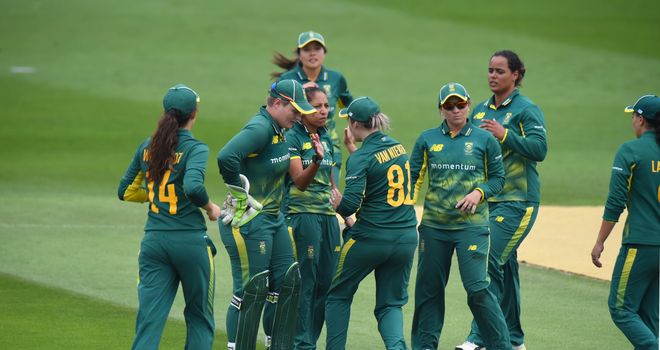 First-change bowler Ayabonga Khaka (3-42) only added to England's woes, bowling Beaumont with her first delivery and then having Sciver caught at mid-wicket and Wyatt pouched at cover in the 17th over.

Chloe Tryon had Jenny Gunn (4) caught in the circle and then ran out Shrubsole (7) with a direct hit as England were left in danger of not making 100, only for Brunt to propel the hosts way beyond that, with assistance from Laura Marsh (15) and Sophie Ecclestone (12).

Brunt scored at a prosaic rate to start with but freed her arms towards the death, striking three fours in one Kapp over as she notched her second ODI fifty, having hit her first in October during the Women's Ashes.

Two early wickets boosted England further but Lee and Van Niekerk denied England another scalp until the 28th over when Van Niekerk was bowled by an excellent Shrubsole slower ball.

Shrubsole thought she had struck for a third time when Lee launched her to Brunt down the ground but, with that decision overturned and Taylor uncharacteristically fumbling the chance to stump Mignon du Preez (36no) on 15, South Africa secured victory with 27 balls in the bank thanks to a huge Lee six.

England captain HEATHER KNIGHT: "I think it was a 50/50 call [at the toss] - I don't think it moved outrageously for them. They bowled very well, at the stumps, and made it tricky for us, but it was about our execution, there were a few soft dismissals in there. Katherine was brilliant to keep us in the game but we didn't get enough with the bat."

SA skipper DANE VAN NIEKERK: "It was close to a perfect performance. We saw there was a bit of swing in the air and the bowlers worked hard. [Lizelle and I] then tried to play our games and rotate the strike with the bat. Lizelle was brilliant - we can get a stretcher now and she can lie down!"

Player of the Match, LIZELLE LEE: "It's nice to have someone like Dane at the other end to keep me calm and keep telling me what we need. It felt a bit different going back [after Brunt's non-catch] and I had to start focussing again but I had Mignon alongside me."

Sky Sports' EBONY RAINFORD-BRENT: "The hardest thing is to continue winning after winning - after having such a high [as the World Cup win] where do you get your motivation and drive from? For South Africa it's easy - they go back to the semi-final last year - but how do England keep consistent? It's hard work for them right now but they have two games to put it right."

Will England level the series at Hove or will South Africa seal it? Watch the second ODI live on Sky Sports Cricket, Sky Sports Mix and Sky Sports Main Event from 12.30pm on Tuesday.