Tammy Beaumont's second century in as many matches saw England Women ease to a seven-wicket win over South Africa to clinch their three-match ODI series at Canterbury.

The 25-year-old struck 105, as she shared a 154-run third-wicket stand with captain Heather Knight (80 not out) - who also hit her first half-century of the series - as England chased down their target of 229 in 44 overs.

Dane van Niekerk made a career-best 95 but with the in-form Lizelle Lee harshly given out lbw for two in the second over off Anya Shrubsole, the visitors struggled throughout their innings to find easy runs.

And, after a brilliant stumping from wicketkeeper Sarah Taylor saw the South African captain fall an agonising five runs short of a maiden ODI century, the visitors lost six wickets for 16 as they were bundled out for 228, with Katherine Brunt picking up 3-52.

Chasing a low total, England stumbled to 51-2 as Ayabonga Khaka took two wickets in 12 balls, including bowling Taylor for just five, but Beaumont fought her way to a fifth ODI hundred as the hosts cruised home.

After winning her third toss in a row Van Niekerk chose to bat on a brilliant pitch, but the Proteas' innings got off to a terrible start when Lee was trapped in front.

Teenage opener Laura Wolvaardt's struggles for fluency with the bat continued, as she consistently found the fielders on the offside while Andrie Steyn, who came in for the injured Stacy Lackay, was equally wary in her approach.

Grinding their way to 22-1 from the opening 10 overs, the visitors stuck to their task admirably with Wolvaardt eventually reaching a 77-ball half-century, having been given two lifelines with England guilty of putting down simple chances in the field.

It took until the 32nd over for South Africa to bring up the 100 but Van Niekerk and Woolvardt upped their intensity, with the captain in particular looking to attack at every opportunity and, despite not often finding the middle of the bat, she sent Shrubsole sailing over her head to reach 50 for the first time in the series. 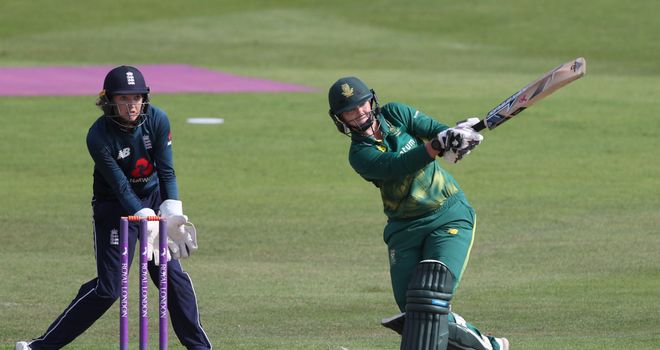 Dane van Niekerk had a previous ODI high score of 81

Although Georgia Elwiss returned and had South Africa's 19-year-old opener well caught by Shrubsole for 64, Van Niekerk continued to tick along and she was joined by Chloe Tryon, who bludgeoned two huge sixes - once more showcasing her sheer power.

Having passed her previous ODI high score of 81, another piece of excellent wicketkeeping from Taylor saw Van Niekerk stumped off Brunt before the England bowler had Sune Luus caught for a four-ball duck off the final delivery of the over.

Marizanne Kapp was caught and bowled by Marsh next ball for a golden duck as South Africa crumbled, with Mignon du Preez and Khaka run out in consecutive deliveries and Taylor's quick thinking and hands helping her stump Shabnim Ismail as the visitors were bowled out for 228 with one ball remaining.

Under the lights at Canterbury, with batting not as simple as it had seemed before play began, Beaumont and Amy Jones started watchfully. 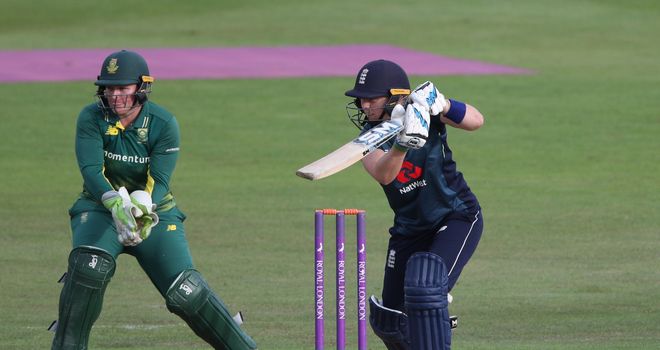 Heather Knight made her first ODI half-century in six innings

Kapp and Ismail fared better then they had at Hove, consistently beating the bat with Beaumont in particular struggling to connect with the ball.

However, it was Khaka who made the breakthrough with her first ball after Jones chipped straight to Luus before the South African seamer bowled the dangerous Taylor, via an inside edge.

But Beaumont and Knight remained calm at the crease, and the opener reached three figures off 121 balls.

Though Beaumont was trapped lbw by Kapp, Knight finished off the match in style as she struck Khaka for four boundaries to seal an impressive comeback series win.

Player of the series TAMMY BEAUMONT: "The most important part was to get the win today. I was playing on the outfield here as a 10-year-old, so it's quite special to finish up the series with a hundred here as well. We had a bad day at Worcester - the top order didn't show up and you won't win many games from 60-6 - so it was important to show what we can do and come back strong."

England captain HEATHER KNIGHT: "Given how we started the series, to come back with two really strong performances is really pleasing. It gives us some momentum now going into the T20 series. It was lovely batting with Tammy - it was a pitch where you had to keep your intent and she hit over the top brilliantly. She has two back-to-back hundreds in her career now, it's really nice to see."

England head coach MARK ROBINSON: [On Tammy Beaumont] "She had to scrap early on - she was a bit all over the place - but that is where she has matured. She was able to fight through, find some fluency and throw some punches back. It was a contrasting hundred, but maybe today was a better one as it was all about here character."