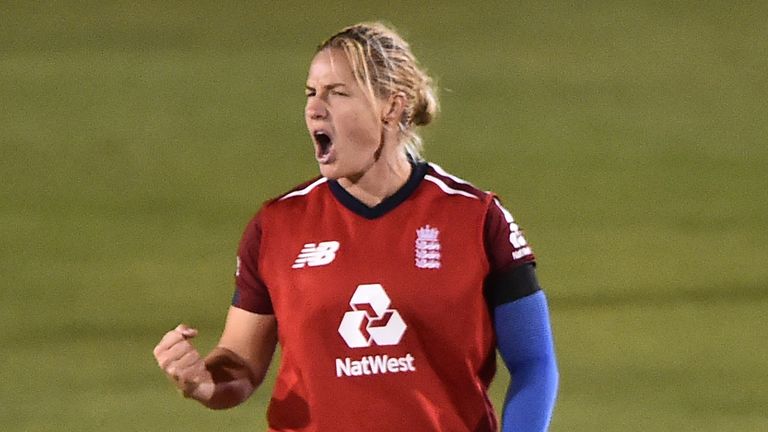 England remain on course for a T20I series whitewash over West Indies after cruising into a 4-0 lead with a 44-run victory at Derby on Monday night.

Amy Jones (55 from 37 balls) punished West Indies for dropping her on two by blasting a fifth T20I half-century as England posted the highest score of the series of 166-6 despite being 45-3 after nine overs. 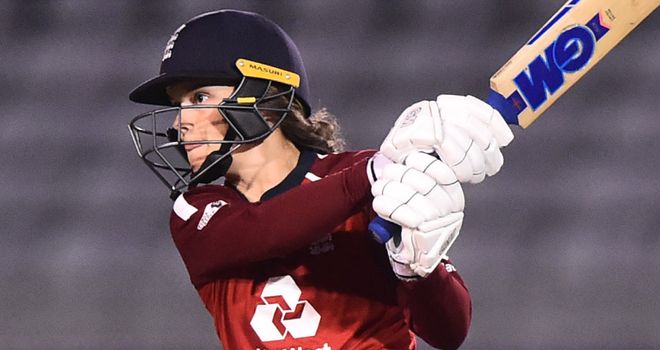 West Indies, who began strongly with the ball after losing the toss, wilted at the back end as England, through Jones, Heather Knight (42 off 29) and Katherine Brunt (25no off 17), plundered 121 from the final 11 overs.

Brunt then bowled Deandra Dottin in the first over of the run chase before Sarah Glenn accounted for West Indies' other big guns, Stafanie Taylor and Hayley Matthews, as the tourists tumbled to 67-5 and ended on 122-9 - extras their second top-scorer with 24.

England made it four wins in a row for the series, all after batting first, and can now wrap up a clean sweep if they triumph in Wednesday's final match.

However, they will be frustrated by three dropped catches in the field, with wicketkeeper Jones (twice) and Nat Sciver spilling spiralling catches that could have made their margin of victory even greater.

West Indies appeared in contention for a consolation victory when a disciplined bowling performance led to Danni Wyatt, Sciver - who struck 82 in the hosts' series-sealing win on Saturday - and Tammy Beaumont being removed for nought, six and 27 respectively in the first 8.1 overs.

Aaliyah Alleyne, who initially struggled with her run-up, rallied to have Wyatt and Sciver caught behind by Shemaine Campbelle, while Beaumont was pinned lbw reverse sweeping Karishma Ramharack's first delivery.

England should have been 48-4 but Leann Kirby spilled Jones at mid-wicket and it was not long before Jones and Knight upped the scoring rate, triggered by Knight pulling Shabika Gajnabi for six. 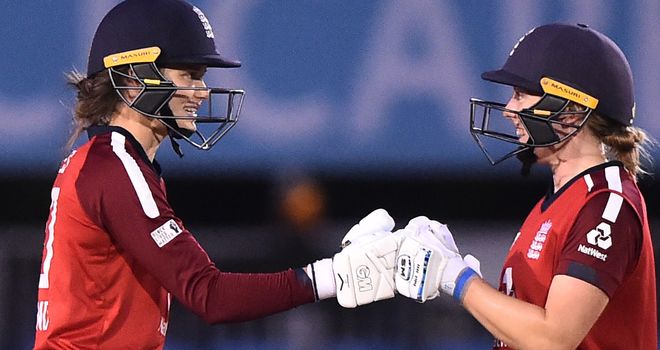 The duo thumped 49 runs across the 12th, 13th and 14th overs, including a brace of sixes from Jones, as they completed a rapid-fire stand of 65.

However, Knight's dismissal at the end of the 14th - caught by Campbelle trying to glide Shamilia Connell down to third man - and Sophia Dunkley's golden duck stalled the barrage of runs, England managing just seven across the two overs following Knight's exit

They kicked on again from 117-5 at the end of the 16th, carting 49 from the final four overs against a ragged West Indies team, with Jones sealing a 30-ball fifty before she was run out in the final over, one which ended with Glenn slashing the only ball she faced for four.

West Indies suffered a hammer blow three balls into the chase when Dottin - whose scores in the series before this game were 69, 38 and 63 - was bowled on the pull by Brunt for four from a ball that skidded on.

The tourists then lost wickets at regular intervals as they faltered batting second once again, with Chedean Nation's enterprising 30 from 25 balls and Alleyne's 15 the best the visitors could muster.

Glenn continued her impressive series by bowling Windies captain Taylor (13) on the cut and trapping Matthews (11) lbw and while England's catching was haphazard, their ground fielding was excellent. 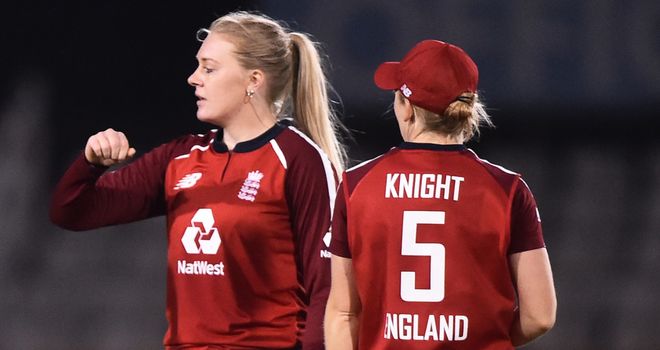 Dunkley - who had been drafted into the side in place of Fran Wilson - Sciver and Knight all secured run outs, Knight's removing Sheneta Grimmond from the final ball of the match.

England captain Heather Knight: "I still think we've got a little bit more to give, at times I think we were a little bit off the pace today and obviously got off to a slow start with the bat. But I'm really pleased with the way we punched back and managed to score very heavily - I think we were 50-odd after 10 overs to to score 160-odd is very good. I thought Amy (Jones) batted brilliantly."

Player of the Match, Amy Jones: "It was good fun, a little bit of a different challenge but I really enjoyed it. I think maybe (the pitch) got a bit better under the lights but that was when I was struggling to find the boundary so I'm not too sure - Katherine (Brunt) made it look good at the end!"

Sky Sports' Ebony Rainford-Brent: "I loved the fact that Jones was playing all her shots, reverse sweeps etc. I don't think there are many people (in the England squad) who can do it. If she gets this right and enjoys it, she could be that finisher - take seamers and spinners on, plays a 360 game. For me, this was pretty much a perfect innings. Exactly what the coach is asking for."

Windies captain Stafanie Taylor: "I will need more reflections but for right now, it is pretty much area bowling and batting. We're still bowling in good areas but the last five is still beating us, the back-end is still not coming to the party. We're still leaving it to one person to get most of the runs. Today was the perfect time for other batters to step up but that just wasn't the case."