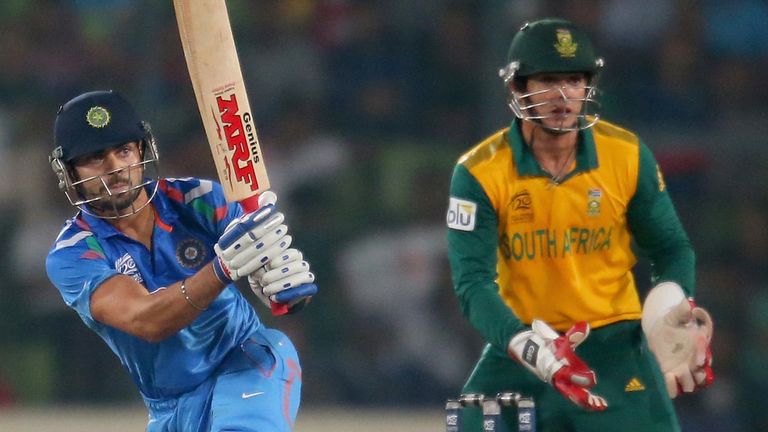 India have secured their place in the ICC World Twenty20 final alongside Sri Lanka after clinching a six-wicket victory over South Africa in Friday's second semi-final.

Virat Kohli once again proved the difference between the sides as his unbeaten 72 guided India to victory with five balls to spare after the Proteas had set a challenging 172-4 batting first.

"I don't think there was a moment in that innings where you felt Kohli wasn't in charge. He knew exactly what he was doing and they got it finished before Steyn's last over."

India, the reigning world and Champions Trophy champions in the 50-over format, will now tackle Sri Lanka in Dhaka in Sunday's final looking to complete the set of ICC trophies.

The Proteas would have strongly fancied their chances of reaching the World Twenty20 final for the first time at the halfway stage after posting a challenging total batting first.

Captain Faf du Plessis, back in the side after serving a one-match suspension against England, held the innings together with a composed knock of 58 off just 41 balls.

He shared a 71-run partnership with JP Duminy, who himself made 45 not out to maintain his excellent form in the competition, but Ravi Ashwin's impressive figures of 3-22 prevented the Proteas from getting away from India.

It was somewhat of a surprise to see AB de Villiers batting down at No.5 after his heroics in the final group game against England and he had little time to make a significant impact down the order.

Rohit Sharma (24) and the recalled Ajinkya Rahane (32) got the India run-chase off to a blistering start with 39 runs inside the opening four overs before the former was deceived by a Beuran Hendricks slower ball.

Rahane upped the ante after losing his partner, dispatching Wayne Parnell for a glorious six over extra cover before the same bowler got his revenge in his following over.

Yuvraj Singh joined Kohli in the middle in the 10th over with the score on 77-2 and the pair kept India well on course for victory with a 56-run partnership.

Yuvraj perished searching quick runs, but his replacement Suresh Raina (21) wasted no time making an impact, taking 17 runs off Parnell's final over before Kohli, the leading run-scorer in the competition, finished the job in style.