IPL: Chris Gayle gets better of MS Dhoni as Kings XI edge out Chennai in thriller

Chris Gayle smashed 63 on his IPL comeback as Kings XI Punjab beat Chennai Super Kings by four runs, despite a stunning unbeaten 79 from MS Dhoni that nearly fired his side to victory.

Set 198 to win, Chennai had seemingly timed their chase poorly when, with six overs remaining, they still required a massive 85 runs to win and Dhoni had only two boundaries and 23 runs to his name.

Dhoni was also badly struggling with a back injury, seeing him and his batting partners struggle to run between the wickets. However, he signalled his six-hitting intent in the 15th over, launching Ravichandran Ashwin for six over deep square-leg.

Two consecutive 19-run overs - in which Dhoni was nearly caught at deep midwicket off the first ball and then proceeded to smash 31 of the 38 runs plundered - helped reduced the equation to a gettable 17 runs needed from the final six balls.

But - despite Dhoni blasting a fifth six of his spectacular 44-ball innings off the last ball - Mohit Sharma held his nerve, with his wide-bowling tactic to the injured Dhoni doing the trick. 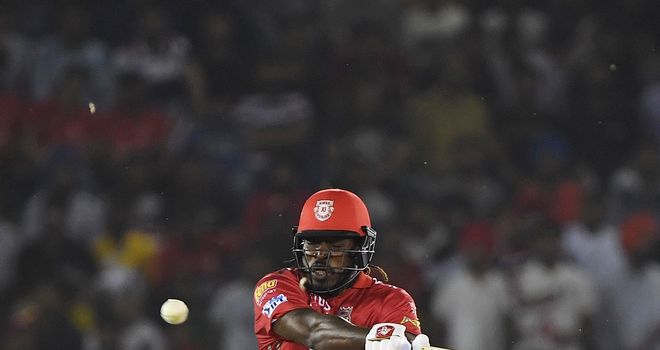 Earlier, Gayle once more lit up the IPL, having not played in either of Kings XI's opening two games, as he cracked seven fours and four sixes in his 33-ball stay at the crease.

He and in-form opening partner, KL Rahul (37 off 22), got to make first use of a belting Mohali batting track after being put in by Dhoni - the pair putting on 96 for the first wicket in the opening eight overs.

Mayank Agarwal (30 off 19) and Yuvraj Singh (20 off 13) kept the Kings XI momentum going even after the wickets of Rahul and Gayle, though when Agarwal departed, Aaron Finch quickly followed for a second successive first-ball duck - Imran Tahir (2-34) finding himself on a hat-trick.

Suddenly, an expected score of 200-plus looked out of reach, though Karun Nair (29 off 17) and Ashwin (14 off 11) did their very best to fire the hosts up close to that target, Kings XI ultimately finishing on 197-7.

The Chennai chase got off to a sluggish start, with Shane Watson (11 off 9) falling to Sharma in the second over and Murali Vijay (12 off 10) to Andrew Tye to start the fifth.

That brought England's Sam Billings to the middle fresh from a stunning 56 off 23 balls against the Kolkata Knight Riders on Tuesday night, but he couldn't repeat his match-winning heroics here, out lbw to Ashwin for nine - a brilliant review from the Kings XI captain after, bizarrely, four runs had originally been signalled.

Up stepped Dhoni, joining Ambati Rayudu at the crease, who impressed with 49 from 36 balls. But, when Rayudu was run out in the 14th over, the Super Kings looked doomed - Dhoni having just received lengthy treatment for his troublesome back, and with near on 15 runs an over required.

Dhoni had other ideas though, falling only just short of another sealing another stunning Chennai run-chase in the IPL.