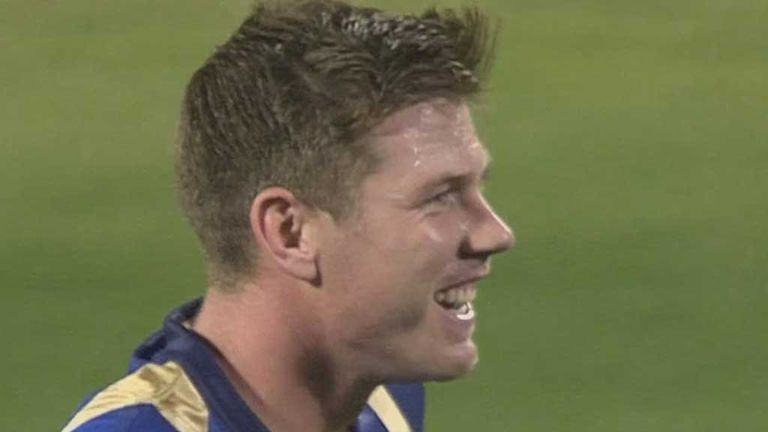 Australian James Faulkner struck a quick-fire 46 and took 3-26 to lead the Rajasthan Royals to a 26-run victory over Kings XI Punjab in the third match of the 2015 IPL.

Rajasthan began the game badly – losing skipper Shane Watson to injury in the warm-up and then slipping to 14-2 inside three overs after being put in to bat.

Stand-in captain Steve Smith countered with 33 off just 23 balls but at 75-5 off 10.4 overs the Royals were still in desperate need of acceleration.

It came courtesy of Deepak Hooda, who struck 30 off 15 balls – including three sixes - to kick-start a sixth-wicket stand of 51 off six overs with Faulkner, who then took the attack to his countryman Mitchell Johnson (2-34), striking him for 18 off four balls in the 18th over.

Kings XI’s chase got off to a disastrous start as Virender Sehwag nicked the first ball of the innings from Tim Southee (2-36) behind.

Fellow opener Murali Vijay hit back with 37 off 32 balls but crucially was run out after Wriddhiman Saha (seven) and Glenn Maxwell (seven) both departed cheaply.

David Millar (23 off 21) and George Bailey (24 off 18) – batting well down the order at six and seven – couldn’t retrieve the situation as the run-rate climbed.

Bailey fell to a stunning catch in the deep when Southee, on the verge of stepping over the rope, palmed the ball back one-handed to Karun Nair, who dove to grab the chance with one hand.

Reflecting on the win, Sky Sports pundit Shane Warne, who captained the Rajasthan Royals to the 2008 IPL title, said: “They know how to win – they don’t feel the pressure – they just execute their plans really well. They don’t fear failure. I think that’s why they win so many close games.

Fellow pundit Nick Knight added: “I thought the captaincy of Steve Smith was outstanding. He kept mixing his bowling up at the end, he didn’t let them settle – he had a brilliant day considering he’s come into the side to captain it as a one-off.”

The IPL action comes thick and fast on Sky Sports 3 over the weekend with two double-headers. On Saturday Chennai Super Kings take on Sunrisers Hyderabad from 11am. That’s followed by Kolkata Knight Riders against Royal Challengers Bangalore at 3.30pm.

On Sunday we’ll bring you Delhi Daredevils against Rajasthan Royals at 11am, and then Mumbai Indians against Kings XI Punjab at 3.30pm.