Roy, who blasted 91 not out from 53 balls in Delhi's win over defending champions Mumbai Indians on Saturday, was stumped by Kolkata captain Dinesh Karthik off Piyush Chawla's leg-side wide in the opening over for one as the Daredevils were bundled out for 129 in 14.2 overs chasing 201.

The England batsman had earlier been left to rue dropping Russell on seven as the Jamaican cracked six sixes - five of them after Roy had spilled his top-edged pull - en route to a 12-ball 41, just under a week after he lashed 11 maximums in an unbeaten 88 against Chennai Super Kings.

Russell and Nitish Rana (59 off 35) blazed a fifth-wicket stand of 61 in just 22 balls as Kolkata racked up 200-9, a total they defended with ease after Roy, Shreyas Iyer (4) and former KKR captain Gambhir (8), who rejoined Delhi in January, fell within the first three overs of the run chase.

Glenn Maxwell (47 off 22) and Rishabh Pant (43 off 26) - the only players to reach double figures - kept the Daredevils up with the rate with a stand of 62, but once Kuldeep Yadav (3-32) banished them both, the visitors crumbled, losing their last seven wickets for 43, Sunil Narine (3-18) snaring three of them to move past 100 IPL scalps.

Delhi had begun the game well with Trent Boult - who went on to bowl Russell to end his hopes of topping KL Rahul's record 14-ball fifty in the IPL - delivering the first maiden of this year's event.

Boult then had Narine caught behind in his second over, while when he snaffled Karthik (19) at square leg off Chris Morris in the 14th over, the hosts were 117-4, Robin Uthappa (35 off 19) and Chris Lynn (31) having blasted a second-wicket stand of 55.

Russell, in particular, and Rana then took over - Russell nailing each of his six sixes off Mohammad Shami (1-53) to take his tally of maximums in the 2018 tournament to 19. 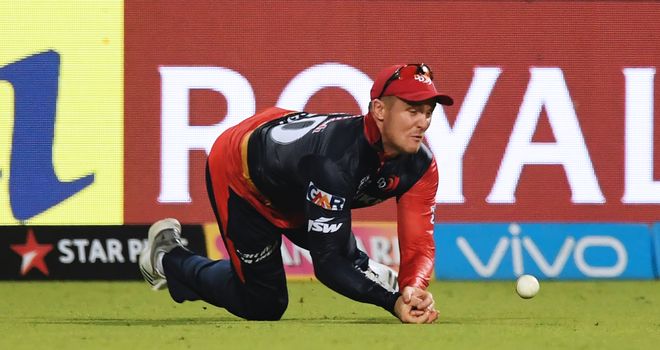 Rana struck four sixes, as well as five fours, as he secured his fifth IPL fifty from 30 balls, ensuring that Rahul Tewatia's one-run and three-wicket final over - England's Tom Curran caught off the last ball of the innings - did not cause too much damage.

Delhi's hopes of a rampant start were shattered as Karthik's nifty glovework sent Roy on his way; Iyer cut a short ball from Russell to Rana at first slip; and Gambhir chopped on to his stumps to hand Kolkata quick Shivam Mavi, 19, his maiden IPL wicket.

Maxwell and Pant gave Delhi hope but that was soon extinguished - Curran chipping in with the wicket of Tewatia - as the visitors slumped to a third defeat in four games and Kolkata moved up to second in the table.