Kolkata lost their opening match to defending champions Mumbai Indians but bounced back to beat Sunrisers by seven wickets in Abu Dhabi, reaching their target of 143 with two overs to spare as Gill and Morgan added an unbroken 92 for the fourth wicket.

Gill completed his fifth IPL fifty from 42 balls and struck two sixes and five fours in his 62-ball knock, while Morgan nailed two sixes and three fours during the 29 balls he faced, wrapping up his team's comprehensive victory by hitting T Natarajan for six and four off successive balls in the 18th over. 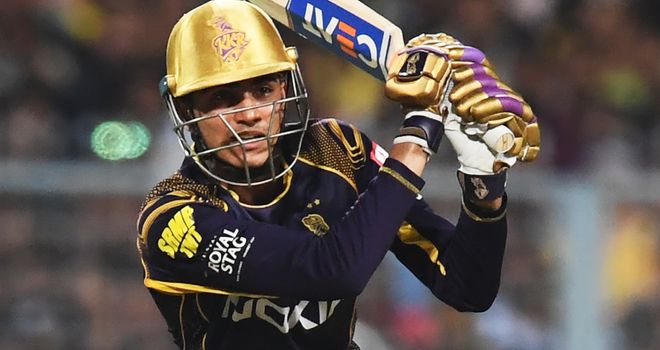 Gill top-scored for KKR with 70 not out

Sunrisers were limited to 142-4 from their 20 overs with Morgan's England colleague Jonny Bairstow having a 31st birthday to forget after being bowled by Pat Cummins (1-19) for just five.

But their total proved insufficient as they slipped to back-to-back defeats having come unstuck against Royal Challengers Bangalore in their opener - Sunrisers now the only team without a win this term.

Kolkata lost Sunil Narine for a two-ball duck at the start of the run chase - a jubilant Warner taking the catch at mid-off - while they could have wobbled once Nitish Rana (26 off 13) and Dinesh Karthik (0) fell in the fifth and seventh overs respectively.

However, Player of the Match, Gill, and Morgan ensured Sunrisers would make no further breakthroughs, with Morgan ending the contest by smashing Nataran for six over wide long-on and then straight down the ground for the match-sealing four.

Kolkata continue their campaign against Rajasthan Royals on Wednesday, with Sunrisers back in action against early table toppers Delhi Capitals a day earlier.

Watch Rajasthan Royals vs Kings XI Punjab in the IPL live on Sky Sports Cricket from 2.50pm on Sunday.