Watch how Ben Stokes played a starring role in England's six-wicket victory over New Zealand in the second ODI.

Ben Stokes and Eoin Morgan struck fifties as England breezed to a six-wicket victory over New Zealand at Mount Maunganui to level the series at 1-1.

The pair shared a stand of 88 off 91 balls as the tourists chased down a modest target of 224 in just 37.5 overs - Stokes finishing unbeaten on 63 off 74 balls in his second game back from a five-month absence, after he was charged with affray following an incident outside a Bristol nightclub in September, while Morgan contributed for 62 off 63 balls. 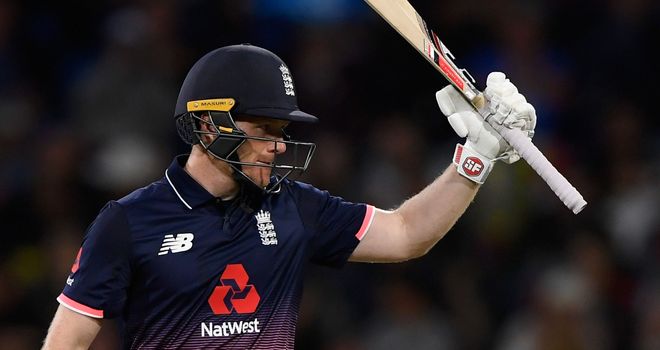 The visitors' victory was founded on a dynamic fielding display, featuring superb catches from David Willey and Jason Roy as well as four run outs, described by Sky Sports commentator Nasser Hussain as the best he's seen from an England white-ball side.

New Zealand - missing captain Kane Williamson due to a hamstring strain - stuttered from the off and despite a maiden ODI half-century from Mitch Santner (63no), who combined with Lockie Ferguson in a ninth-wicket stand of 69, struggled to post a testing target.

Defeat meant that the Black Caps failed to register a 10th ODI win on the spin and equal a national record in the process. 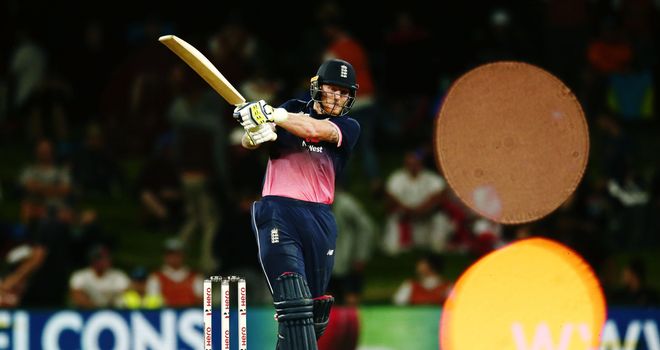 All-rounder Chris Woakes (2-42) set the tone with an early double strike after Morgan won the toss, finding the edge of Colin Munro's bat and inducing a top-edged pull from Mark Chapman - David Willey taking a well-judged catch over his shoulder in blustery conditions.

Willey surpassed that effort with an athletic piece of fielding to run Ross Taylor out for 10, getting down smartly at backward point to execute a one-handed stop before firing a rocket throw into Jos Buttler's gloves without regaining his feet.

With Taylor, whose 113 was the mainstay of New Zealand's victory in the first ODI, gone the onus fell on Martin Guptill to chisel out a large score only for the opener to pick out Roy in the deep shortly after reaching his fifty off 84 balls.

Roy remained in the firing line and plucked a stunning one-handed catch out of the air at backward point to remove Henry Nicholls for just a single, making it 82-5 at the halfway stage.

The first six of the over didn't arrive until the 29th over when Colin de Grandhomme (38) just about cleared Jonny Bairstow at deep square off Stokes but it was a rare glimmer of counter-thrust in an ungainly home innings.

Tom Latham slashed Moeen Ali to third man before De Grandhomme, fresh from taking two to Bairstow at deep square, failed to spot the Yorkshireman had come in closer and ran himself out trying to repeat the feat. 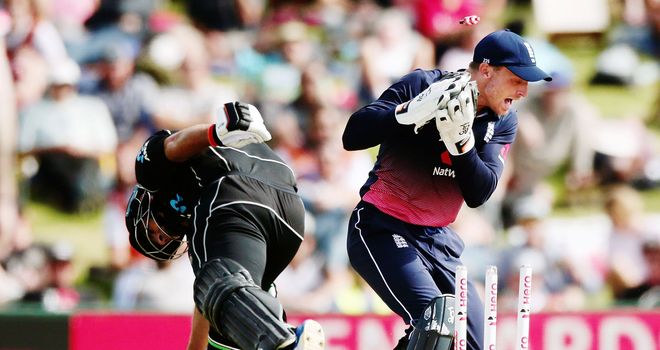 Two more run outs followed - Southee stitched up by Santner's rash call and Boult beaten by Stokes' one-handed pick-up-and-throw in the final over.

But for Santner's belligerent knock, following up his match-clinching 45no off 27 balls in the first ODI, New Zealand's innings would have been in disarray.

The left-hander pulled Tom Curran for six over midwicket to reach his fifty off 45 balls, posting his highest ODI score before the Black Caps failed to bat out their allocation.

The standard of fielding remained impressive in England's innings as Santner took a smart catch at square leg to remove Roy and De Grandhomme dove to his right to take a sensational one-handed grab to send back Joe Root.

Morgan countered by striking three fours in a row off Boult and striking Santner and Ferguson for sixes in successive overs before Latham failed to grab a tough, high chance when the England skipper had 27.

The left-hander received another life on 40 after Jonny Bairstow (37) had guided Ferguson to third man as Nicholls failed to hold on to a fierce pull at mid-wicket.

Stokes brought up the 50-stand with a savage straight six off Boult and the pair looked set to see England through to the finish line only for Morgan to slap a knuckle ball back to Munro having registered his 35th ODI half-century but first in 11 ODI innings.

The all-rounder closed out the match in quick time in the company of Jos Buttler (36no), who secured victory by pulling Santner for six.

Watch the third ODI between New Zealand and England live on Sky Sports Cricket this Saturday from 12.30am.