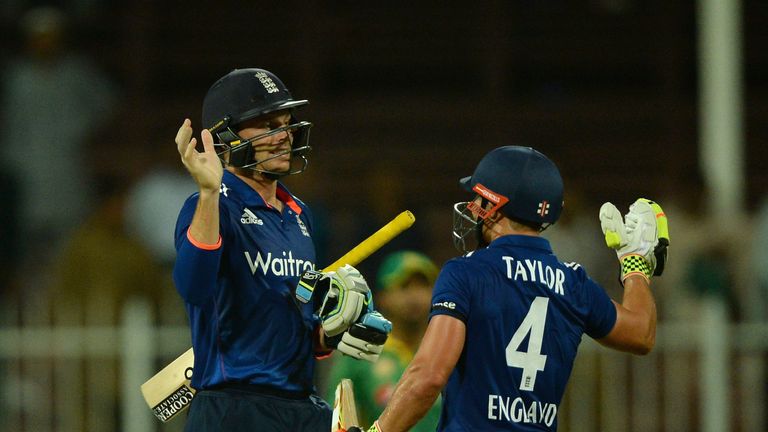 James Taylor proved his mettle by striking an unbeaten 67 to steer England to a six-wicket victory over Pakistan in the third one-day international in Sharjah, a result that guarantees the tourists cannot lose the series.

Taylor once again demonstrated his prowess against spin to register his seventh ODI fifty and share an unbroken 117-run stand of 19.1 overs for the fifth wicket with Jos Buttler, who contributed a timely 49 not out on Tuesday after scoring 16 runs in his previous four innings.

The pair battled gamely on a turning pitch to ensure that England - at one stage 93-4 in reply to Pakistan's 208 all out - reached their target off just 41 overs to earn a 2-1 lead with just one match to come, on Friday in Dubai.

The victory was founded on a probing bowling display led by Chris Woakes (4-40) as Pakistan failed to cash in on winning the toss - their cause severely hampered by three calamitous run outs, including that of captain Azhar Ali (36), which led to a spell in which six wickets fell for 29 runs.

The innings began well enough - Babar Azam sharing a solid stand of 45 for the first wicket with Azhar but Pakistan then lost their way when a promising 47-run stand between Azhar and Mohammad Hafeez (45) ended with Taylor pouncing at backward point to run out the hesitant Pakistan skipper as he was called through. 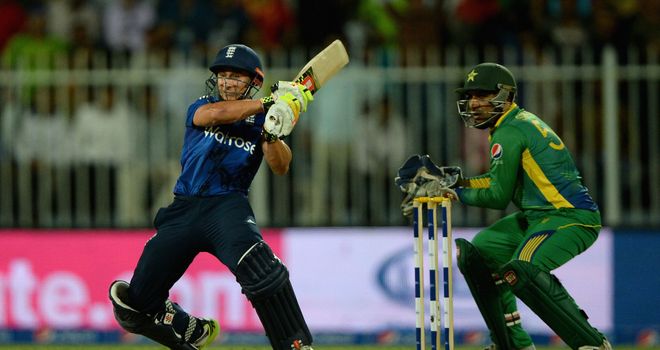 James Taylor pulls during the third ODI between Pakistan and England

Hafeez fell rather softly, top-edging David Willey (1-45) on the pull, to spark a slump in which Pakistan lost three wickets for six runs in 16 balls. Sarfraz Ahmed swept well until he holed out attempting to hit Moeen Ali (1-30) over midwicket and Mohammad Rizwan was run out by a distance by Jason Roy after being sent back by Shoaib Malik.

A third run out followed after Iftikhar Ahmed and Anwar Ali fell to attacking shots, Malik (16) beaten by Jordan's throw as he circled back to the non-striker's end. Debutant Zafar Gohar, brought in to replace the injured Yasir Shah, scored 15 off as many balls before he became Woakes' third victim, caught behind while trying to pull.

Wahab Riaz did bring up Pakistan's 200 with a flat-bat pull for six off Willey and then thumped the first ball of the final over for six over long on off Woakes to finish on 33 not out off 35 balls.

England suffered an early setback in their chase as Roy (seven) miscued in an inspired, lively spell from Mohammad Irfan before and Joe Root (11) swept a full toss to deep square to gift Zafar Gohar his maiden ODI wicket.

Morgan gamely took on the short ball despite suffering a nasty gash just beneath his jaw line as Irfan probed away to add 60 for the third wicket with Hales.

Both batsmen enjoyed lives in their innings - Irfan dropping a return chance when Hales had seven and Zafar unable to react quickly enough to a Morgan drive.

But just when they seemed to have wrested back the initiative, Hales prodded at Zafar and was caught at slip and Morgan played back to Malik and was bowled playing down the wrong line to put the game back in the balance at 93-4.

With the ball turning sharply, the onus fell on Taylor and Buttler to regain the momentum and they duly did, putting on 50 runs in 40 balls - Taylor launching Malik for a huge six over midwicket.

The Nottinghamshire batsman reached his half-century off 51 deliveries by swatting a low full toss from Malik down the ground for another maximum and Buttler kept up the theme to secure the match with nine overs un-bowled when he swung Iftikhar over the deep mid-wicket rope.

Morgan said afterwards: "The chase was exceptional. The manner in which they played was probably the biggest step we've had forward on this tour so far.

"The attitude we showed to dig in and show resilience is one of the things I'm really proud of."