South Africa moved closer to a first home Test series win over Australia since 1970 as the depleted tourists slipped to 110-6 on day two in Johannesburg.

Burns made only four before edging to slip off Kagiso Rabada, while Vernon Philander (3-17) had Renshaw caught by wicketkeeper Quinton de Kock.

Handscomb, batting in Smith's usual position at No 4, was bowled for nought by Philander.

Australia briefly recovered with a 52-run stand for the fourth wicket, but after Usman Khawaja (53) edged to De Kock, the Marsh brothers fell in successive overs to leave them six down.

New captain Tim Paine reached stumps unscathed but his side need another 179 just to avoid the follow-on.

South Africa had earlier taken their overnight 313-6 to a mammoth 488 - the sixth highest Test score at the ground. 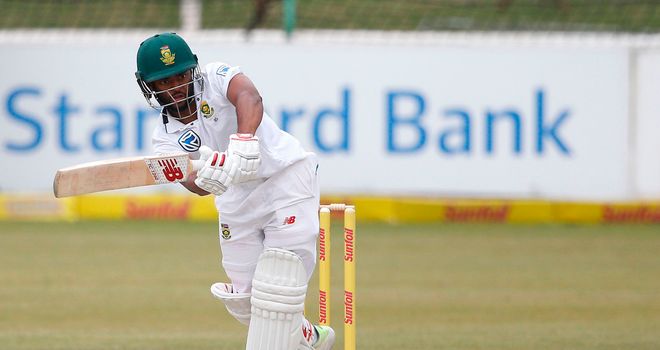 Temba Bavuma was left stranded on 95 not out in Johannesburg

Temba Bavuma produced a brilliant innings but fell five runs short of a second Test century when he ran out of partners.

Pat Cummins ended with 5-83, including the wickets of Keshav Maharaj (45) and Morne Morkel with successive deliveries to leave Bavuma stuck on 95.

Watch day three of the fourth Test between South Africa and Australia from 8.55am, Sunday on Sky Sports Cricket.