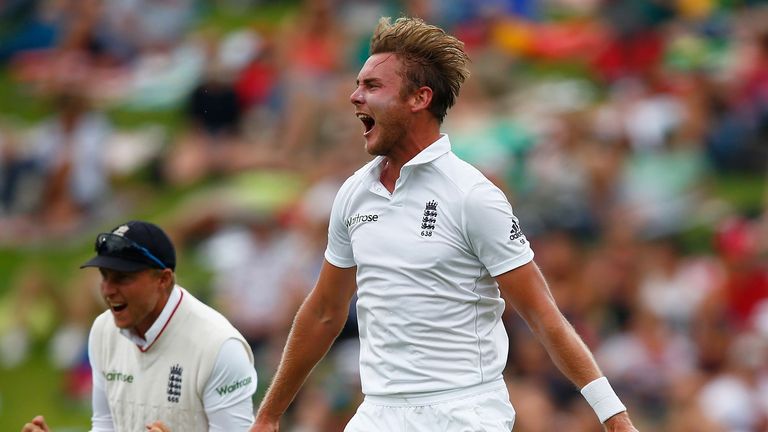 Stuart Broad's 6-17 torpedoed South Africa as England romped to a series-clinching, seven-wicket win in the third Test in Johannesburg inside three days.

Broad ran amok to claim five wickets for one run in a 31-ball salvo, reducing the hosts to 35-5 in an irrepressible spell that invoked memories of his career-best 8-15 as Australia folded to 60 all out last summer.

South Africa squeezed past that tally and up to 83 before Broad threw himself forward in his follow-through to claim a diving, one-handed catch to dismiss Faf du Plessis (14) and cap a quite devastating 12.1 overs of potent seam bowling.

It left England, 1-0 up in the series after their first Test triumph in Durban, requiring only 74 runs to claim a 2-0 series lead with one match to play.

Skipper Alastair Cook (43) put on 64 with Alex Hales (18) and when Nick Compton fell trying to win the Test with a six, the stage was set for vice-captain Joe Root - whose plucky century revived the tourists' first innings - to seal England's first away Test series win since their victory over India in 2012-13.

Root duly did so by hitting the winning runs off Dean Elgar through midwicket, England closing on 74-3 off 22.4 overs, Cook raising both arms in triumph on the players' balcony.

There was little hint of the mayhem to come as openers Elgar and Stiaan van Zyl saw the Proteas to 16-0 at lunch - a lead of six runs after England were bowled out for 323 in their first innings, Kasigo Rabada (5-78) taking his maiden Test five-wicket haul.

But Broad blitzed the hosts after the interval - his haul lifting him above Bob Willis (325) as England's third-highest wicket-taker of all time on 329 behind James Anderson (429) and Ian Botham (383).

Elgar nicked off and Van Zyl picked out Ben Stokes in the gully, before AB de Villiers departed for a fifth-ball duck, caught by Jonny Bairstow off the inside edge to make it 30-3.

James Taylor somehow grasped a grass-cutter catch at short leg to remove Hashim Amla for a duck one run later and Broad seized his 15th Test five-for as Temba Bavuma gloved a ball he was trying to leave onto his wicket.

When Broad took a breather having taken five wickets in a spell for the seventh time - this one spanning 10 overs - Steven Finn removed Dane Vilas with his second ball as Taylor claimed his second superb catch of the innings, diving to claim a stunning reaction catch.

Stokes (2-24) cleaned out Chris Morris with a big in-swinger as South Africa's slump deepened to six wickets for 18 runs, and the all-rounder claimed his second scalp when Rabida (16) snicked through before Anderson and Broad mopped up.

Bairstow's battling 45 had earlier earned England a 10-run first-innings lead, steering the tourists in front with a typically belligerent innings before he was last man out, top-edging Rabada to midwicket.

Joe Root, whose century revived the tourists on day two, added only four runs to his overnight 106 not out before inside-edging Rabada behind on the drive.

South Africa's advantage at that point was still 71 but Bairstow, fresh from his maiden Test century in Cape Town, seized on anything short to chip away at the deficit.

His partner Moeen Ali, who edged through the vacant third slip area before he'd scored, was forced to call for a new blade when a delivery from debutant Hardus Viljoen snapped his bat in half.

But Bairstow stood firm despite seeing Broad (12) bowled by a full Rabada delivery and Finn glove a snorter from Morne Morkel behind.

The Yorkshireman put England in front when he top-edged a pull off Rabada over wicketkeeper Vilas for four - his tenacious knock epitomising the tourists' willingness to stand toe-to-toe with South Africa.

Watch highlights of day three at 6.30pm on Sky Sports 2, then don't miss The Verdict from 7.30pm on the same channel.