Watch a pick of the action from the second ODI between South Africa and England.

Alex Hales' 99 fired England to a five-wicket win over South Africa in Port Elizabeth and a 2-0 lead in the five-match ODI series.

The opener clubbed fifty in his side's victory in the first ODI in Bloemfontein on Wednesday and carried on that form with a responsible 124-ball knock as the tourists chased down the Proteas' 262-7 with 22 balls to spare.

Jos Buttler (48no from 28) and Moeen Ali (21no from 15) guided England home after Hales was dismissed - the former on the day he pocketed a bumper IPL contract with Mumbai Indians - with a thrilling stand of 61 in just five overs.

Hales, Buttler and Moeen backed up some excellent work with the ball from Reece Topley (4-50), whose career-best figures ensured South Africa's innings lost its spark following the departure of skipper AB de Villiers (73). 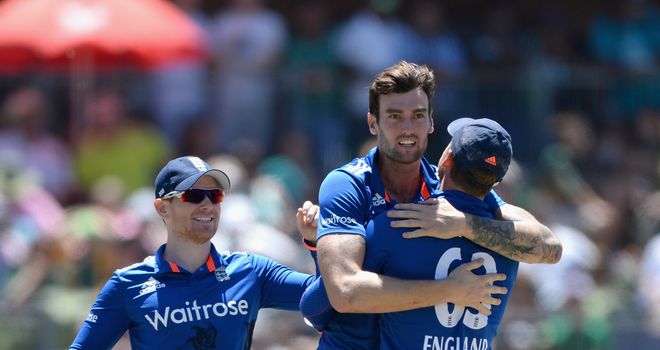 Topley bowled Hashim Amla (4) off his pads in the third over, leaving Quinton de Kock (22), who made an unbeaten 138 from 96 balls in Bloemfontein, and Faf du Plessis (46) to rebuild for the hosts with a second-wicket stand of 49.

De Kock perished lbw to Ben Stokes in the 11th over, with Du Plessis next to go in the 20th, caught by Chris Jordan at slip off a gorgeous in-drifter from Adil Rashid (1-43), having added 45 with De Villiers.

Rashid's fellow spinner Moeen Ali (0-41) was equally tight in the middle period as he and Rashid ensured the 106-run partnership between De Villiers and JP Duminy (47) hinged on well-worked singles rather than boundaries, De Villiers notching his 48th ODI fifty from a sedate 72 deliveries with a flick into the on-side.

The South Africa skipper tried to accelerate as the final 10 overs approached but, after mowing Jordan for six over midwicket, departed to an outstanding, swirling catch from the Sussex seamer off Stokes, the man who pouched him superbly in Bloemfontein a few days ago. 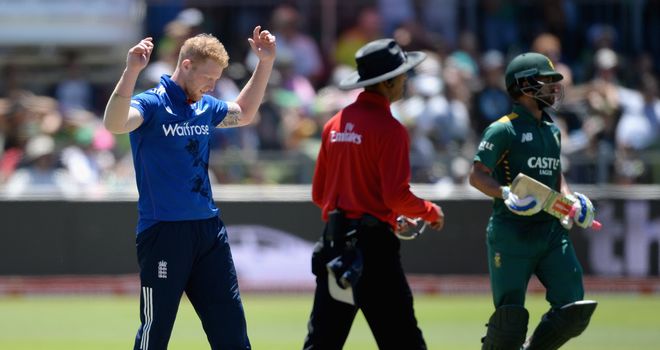 Duminy, dropped down the leg-side by Buttler on 35, was dismissed three balls later, though the left-hander was unfortunate to go with Topley's delivery sliding down leg side.

South Africa stumbled at that point, scoring just 46 from the last eight overs, with Topley having Rilee Rossouw (11) caught behind by Buttler on review - third umpire Chris Gaffaney deciding the batsman had hit ball as well as ground - and Kagiso Rabada (12) snared by Eoin Morgan.

Jason Roy (14) entertained briefly for England as they began their reply, striking three boundaries off the fit-again Kyle Abbott (3-58) before the seamer, who shelled a sharp caught and bowled chance to remove the opener for a duck, bowled him through the gate with a superb in-swinger.

Joe Root had a scare, too, when he was given out lbw to the returning Rabada on three but his review proved successful, with Hawk-Eye suggesting the ball would have bypassed leg stump.

The Yorkshireman went on to play a dogged knock while partnering the slightly more expansive Hales, hitting just two boundaries in the pair's 97-run stand for the second wicket before chopping Abbott onto his stumps. 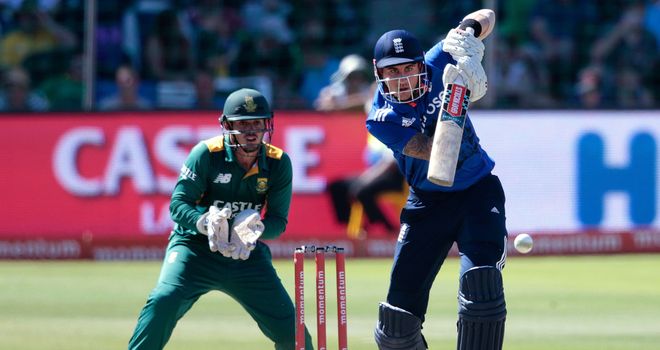 Hales started pretty placidly himself but sped up as he approached fifty, a milestone he reached from 68 balls, before flicking Abbott into De Kock's gloves down the leg-side as he eyed a second ODI ton, his only one to date coming against Pakistan in November.

Buttler and Moeen finished proceedings with aplomb, though - Buttler cracking three sixes in a row off Imran Tahir and Moeen sealing the win with successive fours off Morne Morkel.

Stokes had a day to forget with the bat, though, chopping Morkel on for a six-ball duck during which time his penchant for sweeping spinner Tahir almost saw him fall twice lbw.

Will England secure the series in Centurion on Tuesday? Find out from 11am on Sky Sports 2.