Chris Gayle became the first batsman to score two World Twenty20 hundreds while consigning England to a six-wicket defeat in their 2016 opener in Mumbai.

But Gayle's pyrotechnics - during which he took his sixes tally in T20 internationals to 98, beyond Brendon McCullum's previous record of 91 - saw England lose their fourth straight World T20 game against West Indies following reverses in 2009, 2010 and 2012.

However, Morgan's men should look to the history book for consolation, with England going on to win the event in 2010 after an eight-wicket defeat to the Caribbean outfit in their first match. 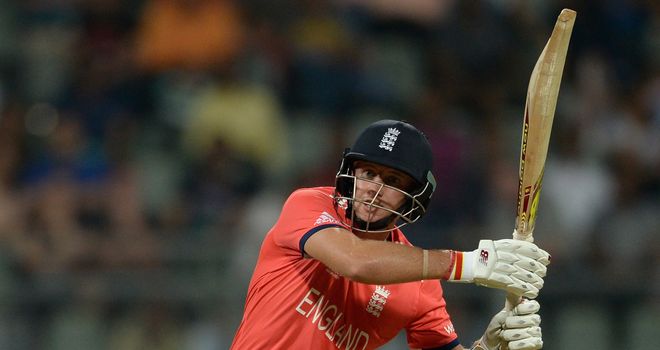 Badree soon turned catcher, pouching Roy (15) with a dive at midwicket after the Surrey man clipped an Andre Russell slower ball in his direction, though Roy's replacement, Root, soon got going, with a huge, hooked six off Russell (2-36) a particular highlight.

The Yorkshireman's second maximum, over deep midwicket, brought up his fifty stand with Hales, shortly before Hales had his off-stump disturbed by a full ball from Sulieman Benn, ending his partnership with Root at 55.

West Indies deployed the slower ball regularly, with the delivery accounting for Root in the 15th over when he skewed to mid-off, two runs shy of what would have been his third T20I fifty, following an unbeaten 90 against Australia in 2013 and a 68 versus New Zealand last summer. Jos Buttler hit three sixes in a losing cause

Buttler added impetus on a ground he will call home this spring when he plays for reigning champions Mumbai Indians in the IPL, the wicketkeeper clubbing three meaty sixes before finding the man on the square-leg boundary.

England smote 54 runs from the final four overs and 18 from a 20th which included Morgan and Moeen Ali (7no from two) nailing sixes, Ben Stokes (15 from seven) trapped lbw by a slower ball from Dwayne Bravo (2-41), and Moeen being run out from the last delivery.

Moeen was soon called into action in the field, snaffling Johnson Charles (0) low at midwicket second ball off David Willey, who was picked ahead of fellow Yorkshire seamer Liam Plunkett.

Willey launched two immediate and vociferous lbw appeals against new batsman Marlon Samuels but, with both turned down, the Jamaican cracked a flurry of early boundaries, before lashing Adil Rashid's fourth ball to long-on. 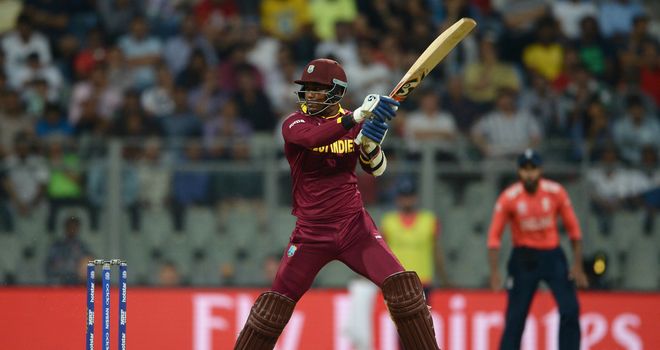 Marlon Samuels got West Indies' innings of to a flyer

Gayle was outgunned by Samuels during their stand of 55 but then swelled his total by depositing both Rashid and Ben Stokes for successive sixes, before cracking three maximums in a row off Moeen.

The left-hander won the game with a single, with Russell (16no from 16) at the other end after Moeen had Denesh Ramdin (12) caught by Rashid off a top-edge and Bravo (two) biffed Reece Topley into the deep.

West Indies match winner Chris Gayle: "The preparation has been really, really good - it's all about practising your skills and then you can exploit it out there in the middle. It worked for me today - it was a good wicket to bat on."

England captain Eoin Morgan: "It was a competitive total but if we had got 220 it could have been a match-winning score. We never really took the game away from them, albeit that the West Indies bowled well and mixed it up, and then once Chris Gayle got going it, it was hard to stop him scoring."

Windies skipper Darren Sammy: "We just have to focus on what we have in the dressing room and the belief we have in ourselves, especially in this format. We will play our cricket and continue to entertain. We are in it to win it and with performances like that we have put ourselves in a good position."