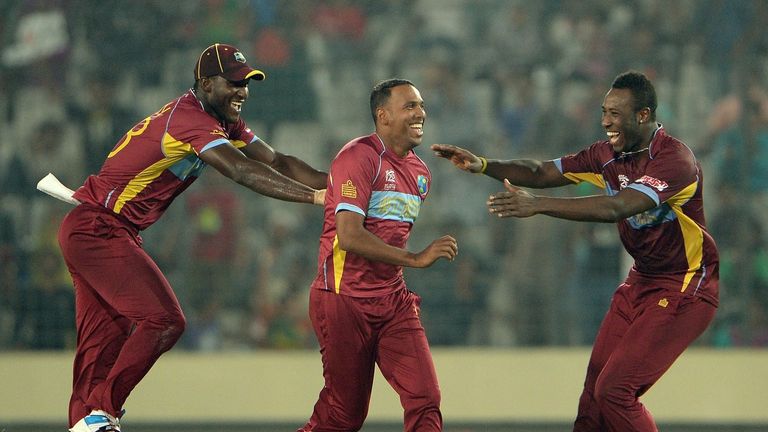 Samuel Badree: Took three wickets for the cost of only 10 runs

Defending champions West Indies qualified for the semi-finals of the ICC World Twenty20 after an 84-run victory in their make-or-break clash with Pakistan.

In a contest which was effectively a straight knockout for the one remaining place in the last four, the Windies progressed after bowling their opponents out for just 82.

Dwayne Bravo (46) and Darren Sammy (42) were the stars of the show as West Indies recovered from a shaky start to post a total of 166-6 after winning the toss and choosing to bat.

The target proved far too much for Pakistan, Samuel Badree returning figures of 3-10 from his four overs as the 2012 winners booked a semi-final date with Sri Lanka.

West Indies had stuttered to the 15-over mark at 84-4 but then took 82 from the final 30 balls as Sammy and Bravo did nearly all the damage in a 72-run stand.

They hit their stride in the 18th and 19th overs - which cost 21 and 24 runs respectively - as the game finally sparked into life.

In the penultimate over, Bravo belted Saeed Ajmal for successive sixes before Sammy joined in on the act to bring back memories of Michael Hussey's match-winning attack on the same bowler for Australia in the 2010 semi-final.

Pakistan's hopes of returning to that stage for the fifth successive tournament were effectively ended when they slumped to 13-4 in reply.

Krishmar Santokie (2-9) trapped Ahmed Shehzad lbw with the first ball of the innings, before Badree claimed the next three wickets in quick succession to wreck Pakistan's chase.

Sohaib Maqsood and Shahid Afridi supplied some resistance in the middle order, combining for three sixes as they both posted knocks of 18.

However, both were stumped off Narine as the required run rate ballooned out of reach and the final wicket fell with more than two overs remaining.