Ahead of his Bellator lightweight title bout against Patricky Pitbull, Peter Queally chats to Sky Sports about his dreams of becoming a world champion, how he has never felt in better shape and about his enthusiasm to perform in front of fans once again Queally says he is relishing his title shot

Peter Queally is relishing the opportunity of a life-time.

'The Showstopper' faces Patricky Pitbull in Dublin's 3Arena on Friday evening for the Bellator lightweight title. The bout is a rematch after Queally's TKO victory last May, and it was elevated to a title fight last month when Patricky's brother, Patricio, vacated the division's belt.

In front of a home crowd, the SBG fighter is hoping to make his dream come true.

"Winning a world title is my dream," he told Sky Sports.

"It's been my dream, and it's started getting more realistic in the last few years. It's really tangible now. To be honest, if you had asked me 10 years ago when I started, if you told me I was going to be fighting for a world title, I'd be like 'get out of here! It's so unattainable, it's such a hard mountain to climb!'

"But I've experienced that in my career, I've taken on all comers, I went everywhere, and I know the standard that's out there. And so for me to be here in a world title fight, I'm just very proud of myself that I've got here."

And although he doesn't yet hold the strap, Queally is confident that he is the best fighter in the division, having already defeated Patricky Pitbull.

"I am the number one lightweight in the organisation," he said.

I am the number one lightweight in the organisation.

"I feel totally in my prime," the 32-year-old said. "I do a lot of very intense cardio training, and it's all measured. It's been measured for years. And my numbers are still creeping up. I'm still slightly even improving.

"My skill-set, I feel like I'm in my prime. And also in the last year or two, I feel I really mentally discovered how to use my skillset better. So I made a big improvement there. I feel like everything is blending in together for a big, big performance for me. I'm just really relishing it. I can't wait."

Backing up his last fight

Queally triumphed over Patricky six months ago, winning after the second round when the doctor stopped the fight.

And after winning in Connecticut, he has no intention of making any changes.

"I think this is why they (Pitbull brothers) have been so successful - they have so much power, people are afraid to get in front of them and confront them.

"But I wasn't afraid. I fought him and I beat him. So I'm going to do the same thing again. I'm not afraid of his power or anything he's going to bring. He's got to be afraid of me. So that's the mentality I'm bringing into this."

Queally is relishing walking out in front of his supporters, having found the behind-closed-doors experience unusual.

"I just can't wait, because it was so weird the last time," he said. "It was in the Mohegan Sun [Arena], it was just empty. It was just weird. The way they did it, there was no walkout really. You walked 30 metres, got in the ring, and then the song stopped.

"It was just so strange, so anti-climatic. So I can't wait now for myself, I'm looking forward to this one to have a proper walk-out with the fans, and all the bells and whistles that go with it. It's going to be crazy. I can't wait. 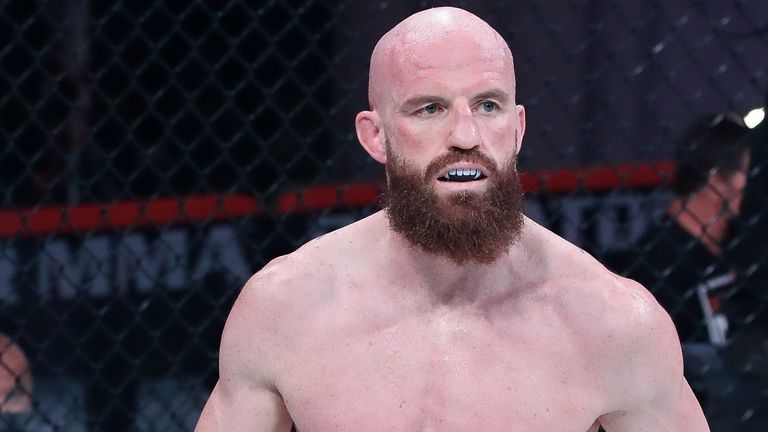 "It was a shock the first time I did it (walking out to a home support in Dublin). I think it affected me as much as it did my opponent! But I'm used to it now, whereas (for) Patricky, this will be all new to him. Very new to him.

"They always say the same thing, that they're looking forward to it. But I think when they get in there, it's a bit different to what they think it's going to be. It hits you like a wall when you come down that ramp, all the noise. And it's all going to be boos for him, so I can only imagine what that's going to be like."