Nathias Frederick speaks to Sky Sports about growing up with Asperger's and a stutter and his effort to bounce back from losing to Matthew Bonner. 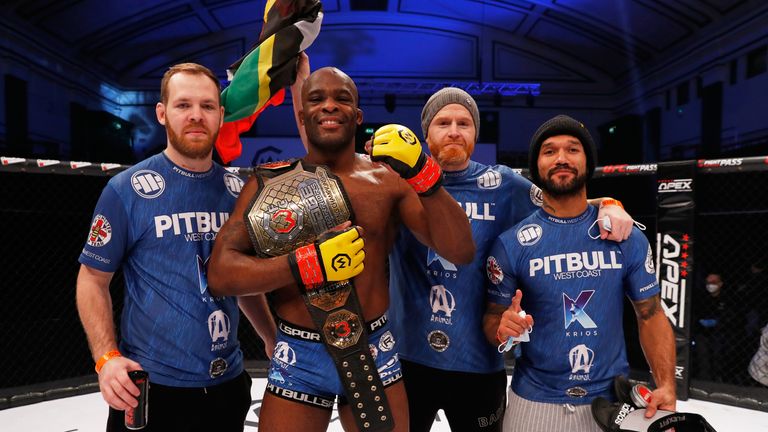 Nathias Frederick is no longer Cage Warriors' Middleweight Champion after defeat to Matthew Bonner at York Hall on June 24. He's vowed to come back stronger and remains full of gratitude to the sport of MMA for helping give his life purpose and structure and fostering his sense of self-worth.

Frederick's youth in Birmingham was very challenging - Asperger's and a stutter combined to make standard education and employment routes nigh on impossible.

"I was at school getting bullied. Everyone knows I've got a stutter problem. The doors kept shutting for me. I moved school four times," Frederick told Sky Sports.

"My stutter was worse back then, I couldn't talk properly. But I'm really happy for falling in love with martial arts. There's boxing, kickboxing, taekwondo, Thai boxing, different martial arts. It's a beautiful sport." Frederick is a thunderous competitor with eight knockouts in his 9-3 career record. But he says learning the wide-ranging skillsets and movements of MMA helped created mental pathways to fuel his development in other areas of life.

"It has opened (neurological) pathways. Now, I'm talking to millions of people. How do I do it? I don't know. I just do it. I just learn. It's through martial arts and I'd like to see it at the Olympics."

Frederick agrees that he and the US President Joe Biden are powerful inspirations for others wrestling with a stutter, or a stammer as it's commonly referred to in the United States. He says MMA enhanced his speech by internalising the concepts of having a go and facing your fears.

"Everyone has something they're scared of. Slow down and give it a go. And to other people, give them a chance to talk. I'm not scared to talk anymore. I'll talk to anybody and tell my story, and tell people about my journey."

With the Tokyo Games upcoming, Frederick is a powerful advocate for MMA becoming an Olympic sport given its role in his personal blossoming. He believes that global showcase would be an important catalyst in awakening young people to the developmental qualities of the sport.

"Hopefully the Olympics jump on board. Most of my MMA friends came to it off the streets and fell in love with it. Or they were bored at home and ended up at the gym. You don't have to fight. Just come to the gym and talk to different coaches. You can do jiu-jitsu or boxing, have fun. The sport can help people around the world," Frederick said.

Frederick is forward-looking and doesn't dwell on his challenging childhood. But he believes the education system should be more flexible to accommodate people like him who learn in different ways and feel frustrated sitting at a desk. Again he cites his MMA coaches' adjustments in coaching him as an example of how teachers could adapt their methods to educate people on the autistic spectrum.

"I can't get a proper job. I can't always read signs though I can sometimes. But I have my own stuff. My coaches speak to me and break things down. They take time with me, building blocks and achieving goals.

"My coaches know how I do things. Everyone else in the gym has instructions like 'jab,' 'cross', but I have 'red' and 'blue.' They know how I work," he explained.

Frederick is forthright and free-ranging in the course of the conversation with Sky Sports. Only at one point does he run aground - when talking about his mum, Valerie. They remain very close and the 38-year-old cites her as his abiding inspiration.

"This is my achievement, doing it for my mum. I'm doing it for her…" he said, breaking off to regroup himself as the tears started to fall.

Frederick may remain devoted to his mother and determined to succeed further - he's urging the UFC or another global organisation to recruit him - but he's conscious of his broader legacy as an inspiration to others struggling to succeed on conventional pathways.

"I want disabilities to come together, show them what we can do. This is not for me. I'm going to show these young ones coming off the streets, all the barriers I'm knocking down, they can do."

While Frederick is keen to inspire everyone to aspire he's aware not everyone is so supportive and can be positively hateful online. He has straightforward advice to anyone who encounters vitriol and derogatory messages on social media.

"My message to them is just block them. Don't put it in your head. Just move on. If the pressure gets too much, talk to family and friends. Hopefully, Facebook and the platforms will stop it. But remember skin colour doesn't mean anything. One nation, we all bleed the same colour."

It remains to be seen how Frederick responds to his loss to Matthew Bonner. But rest assured as a man who's come through serious adversity to reach this point, he won't be dwelling on defeat. His tweet the day after being submitted encapsulates his progressive mindset: 'I'm not crying over spilt milk. I will fix my mistakes.'