Tadej Pogacar won stage 17 of the Tour de France to extend his lead in the yellow jersey as Jonas Vingegaard and Richard Carapaz moved up to second and third.

The trio came to the summit finish on the Col du Portet together after a number of attacks, with defending champion Pogacar riding clear inside the final 150 metres to pick up his second stage win of the Tour.

Rigoberto Uran, who began the day second overall, had been dropped on the final climb of the 178km stage from Muret, allowing Carapaz to move into the last of the podium places behind Pogacar and Vingegaard.

Pogacar's victory extends the Slovenian's lead to five minutes and 39 seconds over Vingegaard, with Carapaz a further four seconds back in third, while Uran slipped more than 90 seconds down. 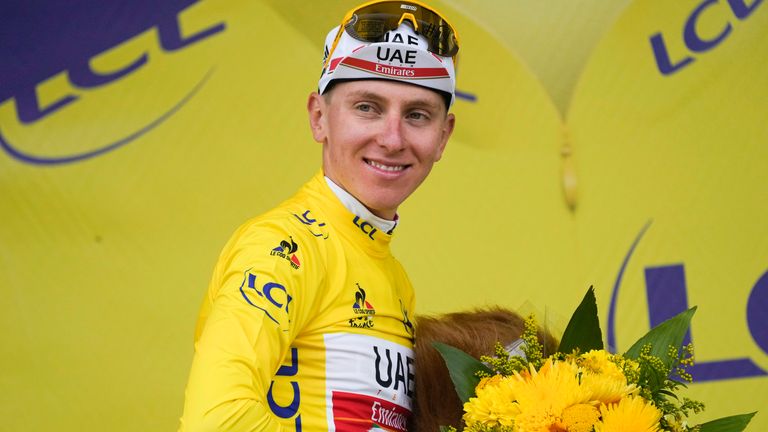 "We were 50-50 on whether to go for the stage or defend but everyone felt good so we tried and we succeeded and I'm super happy.

"The three of us went clear but only me and Jonas were working. We tried a couple of times to go clear, just because more time is better but they were really good today. In the end, I just sprinted in the last 50 metres and it was enough."

"(Jonas) said to me that Carapaz was bluffing and I knew it also. It's nothingunusual, this is the tactic, but when he attacked I was really driven to catch him and just go with his wheel but it was super hard.

"It's a fantastic day. To win in yellow is something I cannot describe."

Pogacar had attacked out of the group of favourites with eight kilometres of the 16km climb of the Portet to go as the last of the breakaway was swept up, with only Vingegaard and Carapaz able to stick with him.

Carapaz tried to take an armchair ride up the climb, not coming through to the front as Pogacar and Vingegaard sought to drop him, with the Ecuadorian then launching a doomed move of his own inside the final 1500 metres.

Anthony Perez and Dorian Godon - the last two survivors of a six-man breakaway - had started the final climb with a gap of almost four minutes over the peloton and dreams of delivering a French win on Bastille Day.

Perez attacked his former team-mate still with 13km of the climb to go, but the 30-year-old soon began to see his advantage crumble - and hopes of a first Cofidis stage win at the Tour since 2008 were ended as Pogacar attacked just as the group of favourites came up to his back wheel.

Victory on a big mountain stage allowed Pogacar to underline his dominance after he won the stage-five time trial in the opening week.