The most decorated female rider of all time won this season’s inaugural women’s Tour of Britain and says the huge roadside crowds throughout the race demonstrated the potential of the sport.

Tour de France organisers have confirmed La Course – a new one-day women’s race which took place on the Champs-Elysees ahead of the final stage of the 2014 Tour – will be back next season and a similar event will be held ahead of the conclusion of the Vuelta a Espana. 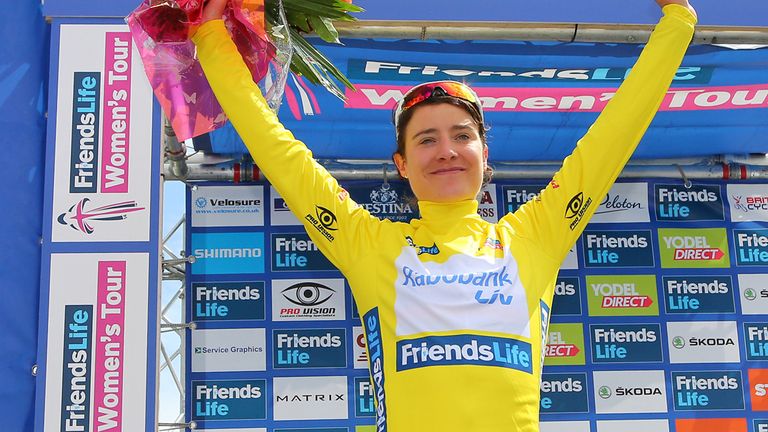 Britain is ahead of the rest of the world in terms of women’s cycling. The crowds were amazing.

However, Vos says the interest and popularity of May’s women’s Tour of Britain, which stood alone, without connection to a men’s event, was a huge positive for women’s cycling.

“The Tour of Britain was fantastic – and what was even better was it was an event on its own,” Vos told skysports.com.

“In other parts of the world we have to link with the men’s races to get people there, get the media there and get the sponsors involved. Britain is ahead of the rest of the world in terms of women’s cycling. The crowds were amazing.”

Vos, though, also welcomes the initiatives by races such as the Tour to link up with women’s cycling – and has particularly fond memories of winning La Course on the Champs-Elysees, a venue steeped in cycling tradition.

“The crowd were already there and that was a big win for women’s cycling. It was fantastic for me to cross the line first, too!

“It’s a good sign for women’s cycling in general, though, to have La Course back next year and the new event at the Vuelta. To have events like La Course means we’re heading in the right direction and these are all good signs.

“We need to use the strength of men’s cycling. The organisers are using their Grand Tours but it’s not all about the Tour de France La Course. It’s about making cycling accessible and showing people and sponsors how beautiful women’s cycling is.”

Brit Brian Cookson is now president of the UCI and he has made the development of women’s cycling at elite and mass participation levels a priority.

Vos says progress is being made but would also like to see more support from current men’s teams, some of which have already formed affiliated women’s squads.

“Women’s cycling was one of the key things in Cookson’s programme when he went for UCI president and he’s done a lot,” said Vos. “But there’s still a lot to do and change.

“Women’s cycling is a young sport compared to men’s cycling and you don’t want to rush the steps. It has to grow step-by-step and in the past few years it’s already grown really, really fast.

“It would be fantastic if more teams added a women’s squad to their men’s team. But it’s something the sponsor has to be willing to do. I hope there will be more in the future.

“The key, though, is to bring cycling to the fans, to the public and make it so people can identify themselves to the riders and the races. If you make the combination with men’s teams and men’s races you have the iconic and historic value of the teams and races.”

Vos is an idol and role model for aspiring female riders – and the multiple-world champion and Olympic road race winner says she has no plans to hang up her wheels anytime soon.

Despite her collection of titles, 27-year-old Vos says losing her world road race crown to Pauline Ferrand-Prevot has made her even more determined going into the 2015 season.

“When you lose something you see the value more, so I’ll be aiming to go for that world title,” she said.

“It’s been a fantastic year with new races like La Course and Tour of Britain but I’m going for a great season next year and the rainbow stripes is definitely something I want.

“It’s fantastic to be an athlete every day, to ride your bike every day and do what you love most, to try and be the best and push myself to the limit. My main ambition is to win. That’s what I like to do most and I hope to do it for a couple more years.”

Vos is also looking forward to the Tour de France Grand Depart in Holland next summer – although she concedes equalling this year’s event in Yorkshire may be tough.

“We’re going to try and match Yorkshire but it’s going to be difficult because Yorkshire was awesome,” she added.

“I doubt we can match Yorkshire in crowds for the men but the week after the race we have a programme called We Own Yellow (weownyellow.com) to get more women on bikes.

"That’s a big event and we hope to get a few thousand in yellow there to support the men and to go for their yellow jersey, to follow their dreams.”