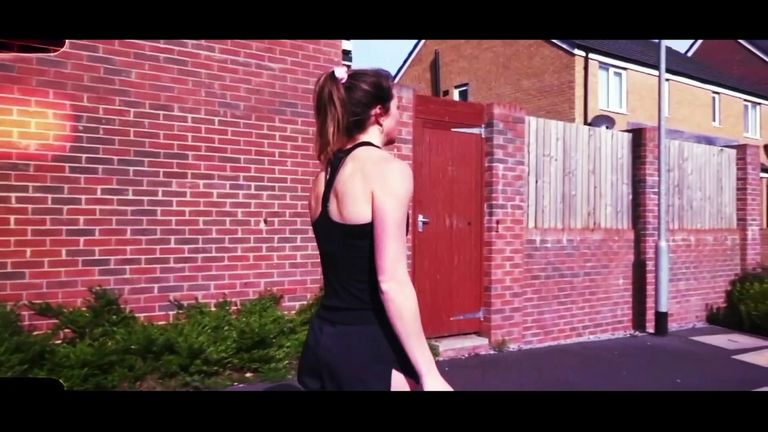 Seventy-nine per cent of women have told Sky Sports News they have felt unsafe while exercising.

The exclusive research, carried out in collaboration with the Women's Sport Collective, asked women about their experiences around exercise and working out.

Over the years, elite athletes have also been affected, with some experiencing stalking, even rape.

Four brave women have agreed to share their stories with Sky Sports News. A warning - the following contains content that some may find distressing.

In the 1990s golfer, Laura Davies was world No 1, but behind the scenes, she was having to deal with something terrifying. She had a stalker.

"He would stand just outside the ropes while I was practising my putting with binoculars on me," she told Sky Sports News.

"Marshalls at the course would have to ask him to go away... He would always want a golf ball signed or a glove or a hat. After a year or so, you would see him a lot and it starts to become a bit more. Stuff started getting sent through the post that was a bit weird."

Davies was playing and living in the United States at the time. The FBI had a taskforce for celebrities and sportspeople who were the subject of unwanted attention. They worked with the LPGA to try and resolve the situation, but it was not an easy time.

"Certainly, for two or three years it was quite unsettling," Davies recalls.

"They profiled him that he was more of a threat to my dad, my brother, my caddy, whoever was male that was close to me."

Davies, who is a member of the world golf hall of fame, is widely considered to be England's most accomplished female golfer. She has won the Ladies European Tour Order of Merit a record seven times and has four major wins.

How Cathy Brown became a boxer

Cathy Brown was the poster girl of British boxing in the 1990s and was just the second woman in the UK to get her professional boxing licence.

In the early days, very few women were involved in the sport, which meant she was not always taken seriously. As a pioneer of female boxing, there was very little money to be made and she would often have to pay men to train with her, so that she could improve her technique.

During her career, Brown had 13 professional wins and challenged for multiple world championships. But it did not always come easy.

"You would walk into the gyms and people were sniggering about the fact that you were walking into the gym as a woman to fight," Brown recalls.

"Nobody took you seriously. Even back in the day in the media, you were encouraged to take your clothes off, have no top on with a pair of boxing gloves. They never wanted to take any serious pictures of you. It always had to be topless or very sexy shots."

She started kickboxing and that led her to boxing. But it was a horrific experience that got her into both sports in the first place.

"There was a point in my life where I was pursued by a man quite aggressively," she told Sky Sports News.

"I was walking in an area where it was quite dark and he pulled me into a place that was away from people and he raped me quite badly. I can't really remember too much because I was in absolute shock of what to do and how to be. And was it my fault?

"And I got to the stage where I thought I have to run away from where I am. I have to give up everything in my life right now and I moved. I moved a long way away".

Brown wanted to turn her ordeal into a positive and she is now working with the Lotus Flower charity's Boxing Sisters programme to teach the sport to refugees in places like Iraq. Her aim is to empower women, through boxing.

She coaches the sport both at home and abroad and is even setting up her own charity to help even more women.

Jennifer Stoute represented Great Britain at the 1988 Olympic Games in Seoul and the 1992 Olympic Games in Barcelona, where she won a bronze medal in the 4x400 metres relay, alongside Sally Gunnell.

That glorious moment in Spain was what Stoute had trained for her entire life. But along the way, like so many other athletes, she received unwanted attention, especially whilst training.

"I had a number of phone calls to my office with somebody watching my training and telling me how and what I was doing," she recalls.

"I was really quite taken aback because I didn't know who he was. Then he turned up at my office, which was totally uncalled for. I confronted him and said: 'Do not come back to my office again'. I didn't hear from him for a few days, but he turned up, maybe four or five days later, at a library that I was at. He was just stood behind me. I felt violated."

Stoute rose to fame as Rebel in the hit TV show Gladiators. She was strong, feisty and competitive and was rarely beaten in events like the Pendulum, Powerball and The Wall.

In the mid-nineties, there were very few who did not watch the programme on a Saturday night.

While it was clearly exciting to be involved with, in a time that pre-dated social media, abuse came in the form of letters.

"The fan mail was always something that you were always in two minds about whether to open," Stoute told Sky Sports News.

"We did get some really bad comments, racist comments, really abusive ones about how you look and the way that you are. As soon as I saw the first two or three words, if they weren't to my taste, I would rip it up and throw it away."

'I've had things thrown at me out of a car window'

For some athletes, particularly runners, it seems that the lockdowns have exacerbated the situation.

Rhiannon Linington-Payne is an international athlete, competing for Wales. When tracks closed, she joined fellow team-mates in training on the streets and in local parks. But in recent months she has experienced abuse.

She told Sky Sports News: "I've had things thrown at me out of a car window. I have had honking.

"I think I was bent over forwards, just trying to breathe and recover and a group of lads rolled down the window, shouted something about the fact I was wearing really tight fitting kit and about my figure and threw an empty beer can at me."

Linington-Payne clearly is not alone.

The data obtained by Sky Sports News and the Women's Sport Collective found that 72 per cent of respondents had been wolf-whistled at while exercising and 46 per cent had experienced verbal abuse.

Whether it is professional athletes or those simply wanting to keep fit, it appears that a majority of women, have at some stage, not felt safe while working out.

If you need further information on the issues raised in this story, please see organisations listed here: https://www.sky.com/help/articles/viewersupport