Adam Peaty put the disappointment of a fourth-place finish in the 100m breaststroke behind him with a gold medal in the 50m; Sky Sports Scholar Olivia Breen stunned the field in the women's T37/T38 100m final; fellow Scholar Joe Fraser completed his Games with a third gold in gymnastics

Adam Peaty ended a rollercoaster few days at the Commonwealth Games on a high note as he claimed gold in the men's 50m breaststroke final.

Peaty's eight-year unbeaten run at the 100m distance ended on Sunday with a fourth-placed finish in the final. He reflected after that he had expected too much of himself on his comeback from a broken foot he suffered in a training accident 10 weeks ago.

But he warned his rivals he was like a cornered lion ready to "bite" back and duly claimed the only major gold medal missing from his vast collection after touching the wall first in 26.76 seconds.

"I'm a much happier man. I had two options this morning, I either fight or I don't. If anyone knows me, I fight," he told the BBC.

"I lost my spark and to have it back now [means a lot]. This is what it is about. Mel, my coach, said to me this morning 'what would a kid do? What would you do when you were younger?'. So, I'm very happy."

Peaty now plans to take a rest from training before putting in a "winter block" to prepare himself for the forthcoming schedule and ultimately the Paris Olympics in 2024. 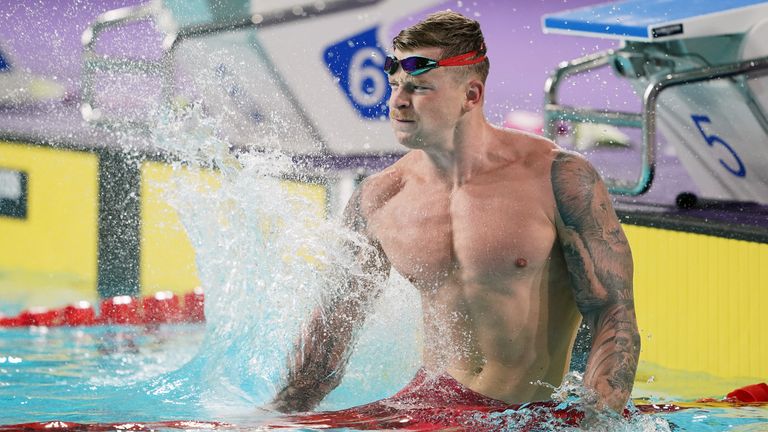 I've got that renewed hunger for Paris now. I've got something to prove - and that's when I'm dangerous.

Breen produced a stunning performance to run down defending champion Sophie Hahn and win in a new personal best time of 12.82. The medal was Wales' third gold of the Games and the first track and field medal to be awarded in Birmingham.

Fraser's final day of competition on Tuesday saw him win England's first gold in the men's parallel bars with a score of 15.000, the highest mark awarded on the apparatus this week. His team-mate Giarnni Regini-Moran took the silver medal.

The 23-year-old, competing in his home city, had previously inspired England's team gold, before triumphing in the pommel horse final too.

Fraser has shown outstanding resilience to just take part in these Games, after overcoming a ruptured appendix five weeks ago and a fractured foot just three weeks ago.

"We've got a lion on our leotard and on our chests and I feel pride," he told the BBC.

"I'm proud to say that I managed to deliver a routine out there, alongside someone I consider to be my brother - Giarnni - and it's his birthday. We both went out there, gave it our all and walked away with the one-two. It's incredible."

In the final event of the night inside the Alexander Stadium on day one of the track and field competitions, Hannah Cockroft secured the one title that was missing from her collection - a Commonwealth Games title.

Cockroft delivered a time of 16.84, which is a new Games record, and crossed the line ahead of her England team-mates Kare Adenegan (17.79) and Fabienne Andre (19.58).

Not all events which are included in the Paralympics form part of the Commonwealth Games programme which is why Cockroft said before the competition in Birmingham that she cried when she found out her event would be included.

His time of 10.94 was a new personal best performance and a Games record. It eclipsed Australia's Jaydon Page (11.10) who secured the silver medal and England's Ola Abidogun who took the bronze in 11.13, a season's best time.