Fans to return to greyhound racing, horse racing, rugby union and rugby league matches as part of third step of government road map; up to 10,000 spectators allowed outdoors and 4,000 - or 50 per cent of capacity - indoors; restrictions eased after successful test event at FA Cup final

Sports fans will be welcomed back to venues across England on Monday as coronavirus restrictions are eased.

Football, greyhound racing, horse racing, rugby league and rugby union will be among the sports to open their doors to fans as the third step of the government's coronavirus recovery road map is implemented.

Barnsley will be backed by around 4,500 for their play-off tie with Swansea, while just over 2,000 will be in attendance when Bournemouth host Brentford in the other semi-final first leg. Both games are live on Sky Sports Football.

But fans have had to get used to a new set of rules with face masks, online health checks and maintaining social distance now part of the matchday routine.

Barnsley's club website has also advised fans "to avoid hugs, 'high-fives', handshakes, or other close contact with those not in your social group".

Carlisle, Redcar, Leicester and Windsor will all host race fixtures on Monday and therefore be the first tracks to benefit from the change in policy, although Ffos Las is still restricted to racing behind closed doors due to the differing stance between the English and Welsh governments.

There is also a slight easing in restrictions on course, with owners able to access the parade ring to meet trainers and jockeys, and masks only compulsory in the paddock and indoor areas.

Redcar's general manager Amy Fair said: "We're really looking forward to welcoming spectators back after so long, we've really missed the atmosphere they bring, but the emphasis has to remain very much on public safety." 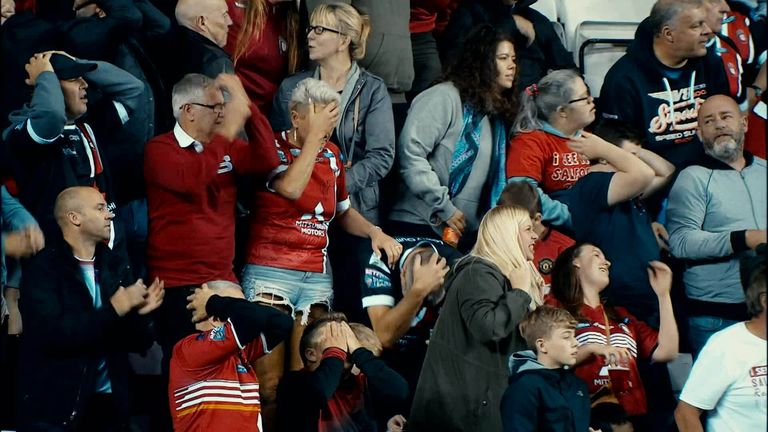 Romford Greyhound Stadium will also welcome back fans but no on-course bookmakers will be present.

Crowds will also be back in rugby union's Gallagher Premiership, with leaders Bristol expecting a crowd of 3,138 for the visit of West Country neighbours Gloucester and Newcastle playing Northampton in front of 1,750.

Rugby league has a busy programme on Monday night with five Super League matches - Hull can have 5,500, St Helens and Warrington 4,000 each, Castleford's capacity is 3,600 and Leigh are working to 2,000 - and two Championship games. Warrington's match against Huddersfield is live on Sky Sports Arena from 7pm.

Premier League crowds will return on Tuesday with the league pushing back its penultimate round of matches back to May 18 and 19.

That decision has allowed every club to play one game in front of supporters before the end of the season on Sunday.