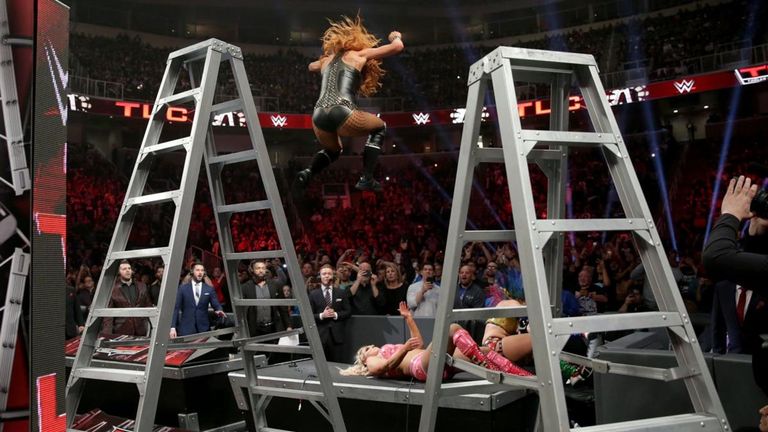 WWE's groundbreaking first women's tables, ladders and chairs triple threat match lived up to all expectations as a banquet of brutality on Sunday night.

SmackDown women's champion Becky Lynch and her twin challengers Charlotte Flair and Asuka put everything on the line in a hugely physical match which gave so much to the fans but also claimed a little piece of all three women involved.

From the moment Asuka threw Charlotte Flair headfirst into a table in the first few minutes of the contest, the tone was set for the extremity which was to follow.

Flair and Lynch had already provided an example of the type of hardcore match of which they are capable with a last woman standing contest at the Evolution pay-per-view in October.

Win a trip to the Royal Rumble!

Win an all-expenses paid trip to the Royal Rumble with our competition in partnership with Sky VIP.

Sunday night's three-way dance for the SmackDown strap was the latest step in that journey and it was a contest which is certain to feature in any conversations regarding the 2018 match of the year.

We've pieced together the most memorable - in a 'can't look but can't look away' style - moments in our special highlights reel, which you can see by clicking on the video above.

You have been warned...