Becky Lynch says she has unfinished business with former Raw women's champion Ronda Rousey and that she would welcome a singles match with Rousey if she decides to come back to WWE.

Lynch was part of the history-making first-ever women's triple threat match at WrestleMania between herself, Rousey and Charlotte Flair in which she became the first person to pin Rousey in WWE to win the SmackDown and Raw women's titles.

Lynch will be defending her Raw women's title in a Submission match against Natalya this Sunday at SummerSlam, and did not hold back on letting her feelings known about Rousey.

Don't miss the biggest party of the summer as WWE stages SummerSlam live on Sky Sports!

"Absolutely, I still haven't had a singles match with her. I am holding onto her championship and I will be whenever she wants to come back," she said.

"When she was here, she was only part-time and she was still crying about the schedule."

The 32-year-old also questioned potential challenges for her title and believes she doesn't see any worthy contenders in her sights.

"I was going to say I've got plenty of people coming for The Man... do I really? It's kind of a disappointment. 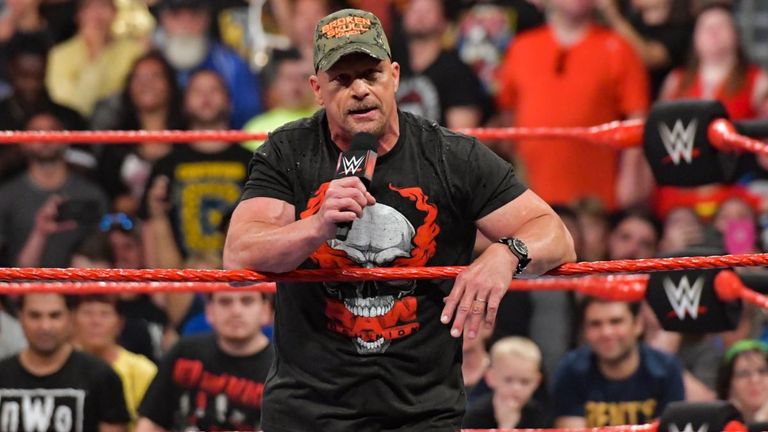 Lynch's 'The Man' persona has drawn comparisons to WWE Hall of Famer Stone Cold Steve Austin in the past and she revealed that the two have become close friends and the former 6-time WWE champion has provided her with welcoming advice.

"Steve is an absolute legend. He really just changed the game in this industry - paved the way for us to do the things that we do and he's been very generous in his time and his advice and he's become a good friend of mine.

"There are similarities. I have never once in my life set out to be the next Stone Cold, I have only ever wanted to be the first Becky Lynch. We live down the road from each other. We are neighbours, talking over the fence like a couple of old hens."