NBA Draft: Six top European prospects to look out for

Join us for full coverage of the 2021 NBA Draft on Thursday night, live from 00:30 on Sky Sports Main Event & Arena

With Giannis Antetokounmpo now an NBA Champion and Finals MVP, Nikola Jokic a regular season MVP and Luka Doncic dominating in his Olympic debut, it's clear now more than ever that Europe is a true hotbed of basketball talent.

That's without even mentioning France's opening victory against the US men's team in Tokyo.

In fact, there were a record number of Europeans appearing at this year's All-Star Game, with Giannis, Jokic and Doncic joined by Rudy Gobert, Domantas Sabonis and Nikola Vucevic.

Memorably Antetokounmpo - the first overall pick for Team LeBron, selected by James himself - scored 35 points on a perfect 16-of-16 shooting to take home All-Star MVP honours, just another trophy to add to his already bulging cabinet.

All six had stellar seasons, and with the likes of Bojan Bogdanovic, Bogdan Bogdanovic (unrelated of course), Danilo Gallinari, Clint Capela and Jonas Valanciunas shining at various points during the postseason, the European talent across the Atlantic runs deep even beyond the stars dominating at the very top of the game.

With all that in mind, and the 2021 NBA Draft on Thursday night looming large, let's take a look at some of the players heading into the league to strengthen the European contingent even further.

Due to his dizzying array of low-post moves and passing ability as a big man, the 6'10" center is projected by most mock drafts as a lottery pick somewhere in the 8-15 range. He is probably a tad undersized to play as a true five in the NBA, so will need to improve his outside shooting (he shot just 21% in Turkey) to reach his potential in the league.

Sengun's immaculate footwork, however, is something that should light up the league for years to come. 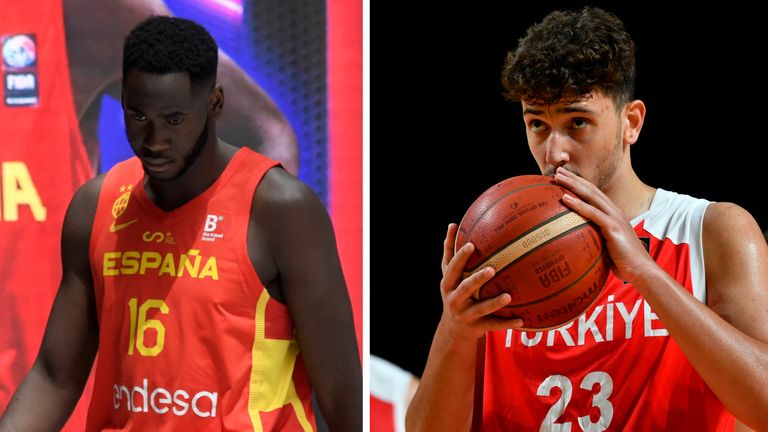 Born in Berlin, Germany, the 19-year-old forward has spent the past two seasons playing for the Michigan Wolverines, where he averaged 12.5 points, 6.5 rebounds and 3 assists per game this season.

Scouts love Wagner's defense and all-round ability on the court. Given his combination of size - 6'9" in reports but almost 6'11" according to the player himself - and solid shooting from deep (34% for Michigan), he is expected to be taken in the top 10 of the Draft. His brother Moe currently plays as a center for the Orlando Magic after being drafted at number 25 by the Los Angeles Lakers in 2018.

Like Luka Doncic before him, Usman Garuba has progressed rapidly through the Real Madrid youth teams after joining the club as a 12-year-old.

Now 19, he was named EuroLeague Rising Star and the Spanish league's Best Young Player this season. Garuba also has two FIBA European Championship gold medals to his name as part of Spain's victorious under-16 and under-18 squads in 2016 and 2019.

Garuba's game is all about exceptional defense across multiple positions, as he proved by holding his own while guarding none other than Kevin Durant in Spain's exhibition game against the USA ahead of the Tokyo Olympics.

The forward was a team-high +11 in plus/minus during his 13 minutes of playing time against the US and hauled down eight rebounds, demonstrating the impact he can have on the defensive end alone.

With plenty of room to develop on the offensive side of the ball, Garuba could quite easily prove to be one of the steals of this draft class. Many are predicting him to be picked up by the New York Knicks at number 19. If so, you can be certain Tom Thibodeau will love coaching the Madrid native.

A three-time Lithuanian champion and two-time cup winner with Zalgiris, as well as the Best Young Player in the 2021 season, Rokas Jokubaitis could potentially sneak into the bottom half of the first round.

The 20-year-old is a 6'4" combo guard who thrives in the pick and roll and can shoot threes at a good clip, averaging 38.8% from beyond the arc in the EuroLeague. In the right environment, Jokubaitis has the potential to develop into a playmaking sixth man in the NBA.

Born in Bordeaux, France, Joel Ayayi joined Gonzaga's basketball program in 2017 but didn't play in his first year. In January, however, he recorded the first triple-double in the college's history, with 12 points, 13 rebounds and 14 assists in a win against Portland. Basketball runs in the family genes, too; his father was a professional in France as well as representing Benin at international level.

The 21-year-old averaged 12 points per game and shot an impressive 38.9% from three for Gonzaga in the 2020-21 season and at 6'5", projects nicely as a 3-and-D secondary guard or slightly undersized wing. Likely to be snapped up in the first 10 picks of the second round.

Filip Petrusev, a 6'11" center from Belgrade, Serbia, is coming off the back of quite a season. Not only was he the top scorer in the Adriatic League, he was also voted both ABA MVP and Top Prospect after averaging 23.6 points per game. Add to that his shooting percentages, 57.9% from the field and 41.9% from deep, and it's clear that this guy can get buckets at will.

As always with any European big man possessing a sweet shooting stroke, there are concerns surrounding Petrusev's physique in comparison to those of the hulking centers that await in the NBA.

That being said, he mostly played as a four for Mega Basket alongside center Maro Simonovic (hence his comparatively low rebounding average of 7.6 per game) and given his obvious scoring talent, there shouldn't be anything stopping teams from taking a flyer on him midway through the second round.

Funnily enough, the current NBA MVP Nikola Jokic also played for Mega Basket in the Adriatic League, winning MVP and Top Prospect honours the season after he was drafted 41st overall by the Denver Nuggets in 2014. Stash Petrusev away for a season or two, let him develop, bulk up, and who knows what kind of talent you might have on your hands in the near future.