Nikola Jokic scored 33 points, including a go-ahead lay-up with 7.9 seconds left, as the visiting Denver Nuggets beat the Dallas Mavericks 107-106 on Wednesday night. 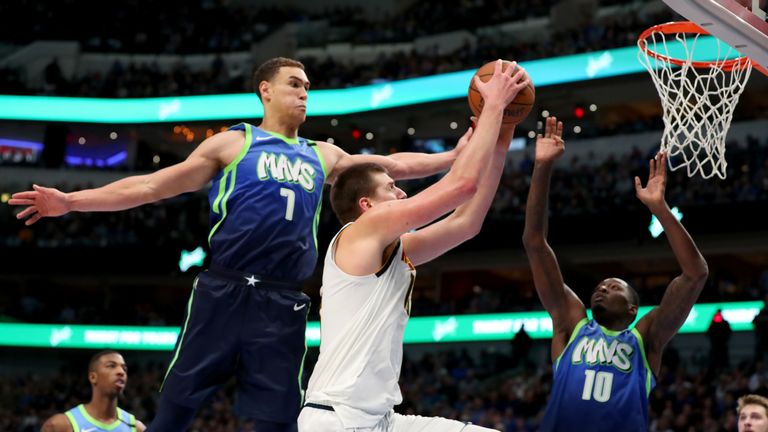 Nikola Jokic scored 33 points, including a go-ahead lay-up with 7.9 seconds left, as the visiting Denver Nuggets beat the Dallas Mavericks 107-106 on Wednesday night.

The game was tied at 101 when Dorian Finney-Smith hit a three-pointer with 2:57 left, and Jokic missed on the other end. Hardaway's bucket made it a five-point lead, but Jokic hit a shot in the lane, and Grant hit two free throws to make it 106-105 with 1:27 to play.

On the game's final possession, the Nuggets trapped Doncic to force him to pass, and their scrambling defense forced an errant Mavericks pass that prevented Dallas from getting a shot up before the buzzer. James Harden scored 41 points en route to his second triple-double of the season as the visiting Houston Rockets beat the Atlanta Hawks 122-115.

Harden had a subpar shooting night, making only 9-of-34 shots, but was 19-of-23 from the line and also contributed with 10 rebounds and 10 assists. It was Harden's 44th career triple-double and his 15th 40-point triple-double, second-most in NBA history.

The Hawks trailed by as many as 23 in the second quarter but cut the lead to 118-115 with 18 seconds left. Harden made four free throws over the final 10.4 seconds to put the game away as Houston defeated the Hawks for the sixth straight time.

The Hawks wasted a triple-double from Trae Young, who finished with 42 points, 13 rebounds and 10 assists. It was Young's sixth 40-point game and his second triple-double of the season.

Houston also got 22 points and 22 rebounds from Clint Capela and 18 points on six three-pointers from Ben McLemore. Atlanta had two others with double-doubles. John Collins had 17 points and 14 rebounds and Alex Len added 14 points and 10 rebounds. 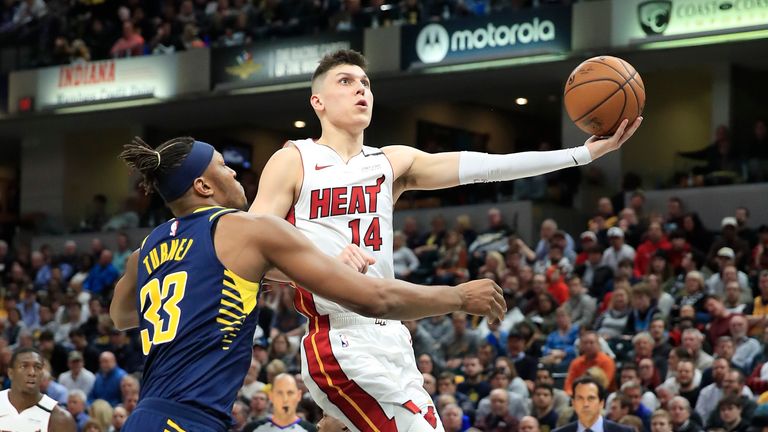 Jimmy Butler had 14 points, seven assists and six rebounds, leading the Miami Heat to a 122-108 win over the host Indiana Pacers in Indianapolis.

Latest news, rumours and analysis ahead of the February 6 trade deadline

Indiana, who fell to 15-5 at home, were led by power forward Domantas Sabonis, who had game-highs in points (27) and rebounds (14). He also had six assists. The Pacers had four other double-figure scorers: Aaron Holiday (14), Justin Holiday (14), Jeremy Lamb (13) and Edmond Sumner (13).

Pacers wing TJ Warren, who had 36 points on Monday against the Charlotte Hornets, was held to three points on 1-for-5 shooting in 23 minutes.

Miami grabbed a 31-23 lead after those 12 minutes. Butler shot 4-for-4 and had eight points and Miami made nine of their final 12 shots to take control after there were four ties earlier in the first quarter.

Miami took a 62-49 lead into half-time then scored 38 points in an explosive third quarter, taking a 100-72 lead. They cruised to victory without much trouble in the fourth. DeMar DeRozan led the way with 30 points as the San Antonio Spurs crushed the host Boston Celtics 129-114. Lonnie Walker IV added 19 points off the bench as the Spurs won for the fourth time in their last six games.

Gordon Hayward scored 18 points, as the Celtics narrowly avoided their worst loss of the season in just their third defeat at home. Kemba Walker, returning from three games missed with the flu, had six points before getting ejected in the third quarter.

The Spurs came out of the gate on an 8-0 run and led 22-3 just seven minutes into the contest. The Celtics answered with a 15-6 spurt to get back within 10, and San Antonio ended the first quarter up 34-22.

The Spurs then kicked off the second with a 15-5 stretch to grab a 49-27 lead with 7:50 left in the half. During that time, the Celtics went to their bench for a spark, bringing in fan-favourite rookie Tacko Fall in hopes of getting energy from the crowd. But Boston still could not bridge the gap, reaching half-time down 65-47.

A 20-11 start to the third had Boston within single digits, 76-67, with 6:21 on the clock. After a Jayson Tatum bucket cut the Spurs lead to seven, Walker was assessed with a double technical foul for arguing an illegal screen call and ejected from the game at 5:49.

San Antonio extended their lead to 93-72 on a Patty Mills three-pointer with 2:25 left and carried a 99-83 edge into the final quarter. The Spurs' lead reached as high as 23 down the stretch. Serge Ibaka made two free throws with 5.1 seconds remaining in overtime to earn the visiting Toronto Raptors a 112-110 victory against the Charlotte Hornets.

In regulation, Kyle Lowry's lay-up with 17 seconds left pushed the Raptors ahead 100-99, which was countered by a Rozier free throw to force the extra session. Rozier heated up in the second half and ended up with 27 points, while team-mate Miles Bridges had 26. Bridges scored 17 of his points in the first half.

The Hornets scored the final nine points of the third quarter to close within 82-81. Charlotte stormed to a 94-84 lead, capped by Rozier's three-point basket. Toronto bolted to within 95-94 with less than three minutes remaining.

It was the second night in a row that the Raptors failed to protect a lead, losing at home to the Portland Trail Blazers on Tuesday night. This time, they had enough answers. 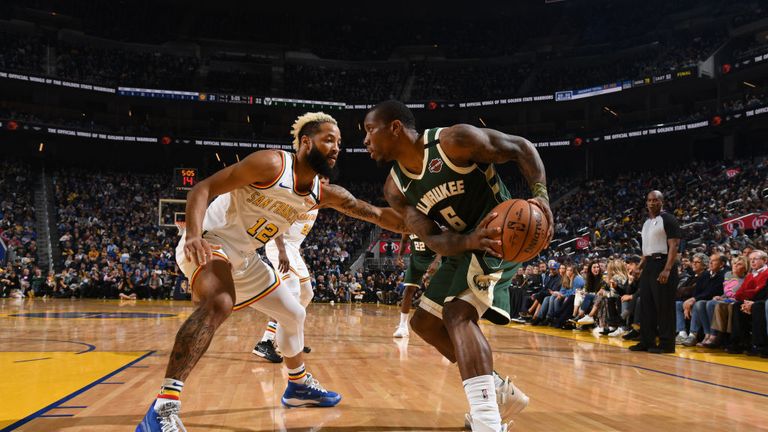 Two days after shooting 15-for-45 on three-pointers in a 126-104 loss at San Antonio, the Bucks were dreadful from behind the arc - 9-for-41 - but still managed a sixth win in their last seven games.

Giannis Antetokounmpo had 30 points and Khris Middleton 21 for the Bucks, who won for the third straight time at Golden State, this time in their first visit to the new Chase Center in San Francisco.

After being held to a 19-all tie through one quarter, the Bucks never trailed over the final 36 minutes, but also never created a comfortable margin over the Warriors, the Western Conference's last-placed team.

Antetokounmpo gave Milwaukee a rare double-digit lead at 99-88 when he converted an alley-oop into a dunk with 3:26 left, before Kerr called upon his team to foul the reigning Most Valuable Player on two consecutive possessions.

Antetokounmpo missed two of the four free throws, then air-balled a three-point attempt, helping Golden State reclaim possession trailing 101-96 with still 1:30 to go. But defense saved the Bucks, as the Warriors went from the 2:30 mark to 27.0 seconds remaining without a field goal, allowing Milwaukee to hold on. 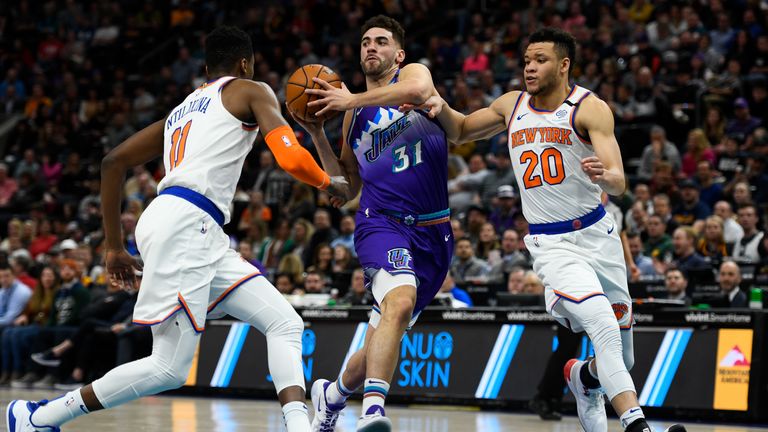 Bojan Bogdanovic scored 20 points and Emmanuel Mudiay added a season-high 20 off the bench to lead the Utah Jazz to a 128-104 victory over the New York Knicks.

Rudy Gobert added 16 points and 16 rebounds to lead the Jazz. Donovan Mitchell chipped in 16 points and four others scored at least 11. Utah won for the 12th time in their last 13 games and notched their seventh straight victory.

Utah made a quick start on offense in the first quarter. Gobert had a pair of dunks to fuel an 11-0 run. Clarkson capped it off with a steal and lay-up that gave the Jazz a 30-16 lead. New York rallied early in the second quarter. The Knicks cut the deficit to six points when Damyean Dotson put back his own missed layup to trim Utah's lead to 46-40.

The Jazz pulled away a second time before half-time, ripping off an 18-4 run, starting with a Clarkson three-pointer and ending with a Gobert dunk, to boost their lead to 64-44.

Things did not get better for New York in the second half. The Jazz opened the thrd quarter with 10 unanswered points, capped by a dunk from Mitchell, and extended their lead to 82-53, their largest of the game. Nikola Vucevic had 29 points and nine rebounds as the Orlando Magic routed the visiting Washington Wizards 123-89.

Evan Fournier added 19 points on 7-of-10 shooting for Orlando, who have won four of five. DJ Augustin added 18 points off the bench. Khem Birch had 11 points and nine rebounds.

Reserves Troy Brown Jr and Admiral Schofield led Washington with 18 points each and Brown added 11 rebounds. Anzejs Pasecniks added 16 for the Wizards, who came in having won two straight games over Denver and Boston.

Washington's starters combined for only 28 points on 12-of-33 shooting. The Wizards committed 23 turnovers to 16 for the Magic. Orlando outrebounded Washington 51-40.

Wizards guard Bradley Beal missed his fourth straight game with lower right leg soreness. The Wizards remain without a group of regulars that includes Thomas Bryant, Rui Hachimura and Davis Bertans among others.

Aaron Gordon's three-point play made it 61-50 and Vucevic's dunk with nine seconds left completed a 23-5 stretch that sent Orlando into half-time up 69-52.

Vucevic hit a three-pointer early in the third to push the lead to 20, and after an 11-0 run capped by Markelle Fultz's alley-oop lay-up the lead was 83-54 with 7:48 left in the third quarter. Orlando cruised into the fourth quarter with a 25-point lead and increased it to as many as 29 points in the final minute. Brandon Ingram and rookie Jaxson Hayes each had a double-double as the host New Orleans Pelicans defeated the Chicago Bulls 123-108.

Ingram had 29 points and 11 assists, falling two rebounds short of his first career triple-double, and Hayes had 14 points and 12 rebounds for his second double-double. New Orleans, playing its second straight game without second-leading scorer Jrue Holiday (elbow), won for the sixth time in eight games.

Ingram had 16 points as the Pelicans took control by outscoring the Bulls 44-27 in the third quarter. JJ Redick added 24 points, Josh Hart had 13, Derrick Favors had 12 and rookie Nickeil Alexander-Walker and Lonzo Ball scored 11 each.

Zach LaVine scored 32, Thaddeus Young had 18, Kris Dunn 15, Lauri Markkanen 14 and Coby White 10 to lead the Bulls, who lost their fifth straight and for the sixth time in seven games.

The Bulls scored the first five points of the third quarter to break from a 48-all half-time tie. Ingram scored nine points to lead a Pelicans run that gave them a 65-59 lead.

Hayes had six points in the final four minutes as the Pelicans extended their lead to 92-75 at the end of the third quarter. Alexander-Walker scored the first three points of the fourth quarter to push the lead to 20 before the Bulls went on an 11-3 run to get within 12.

They got as close as nine before Ingram, Hart and Redick each made a three-pointer to increase the lead to 115-98 with 3:40 left to seal the win.