This live stream has now concluded

Watch the Las Vegas Aces take on the Connecticut Sun in Game 4 of their WNBA playoff semi-final series via a free live stream on the Sky Sports website, Sky Sports app and Sky Sports' YouTube channel.

It's win or go home die for the No 1-seeded Aces as they trail 2-1 to the seventh-seeded Sun in the best-of-five semi-final series heading into Game 4.

Las Vegas have already battled back to parity once in this series after being hammered 87-62 in Game 1. League MVP A'ja Wilson led the way in Game 2 with 29 points and seven blocks as the Aces levelled the series at one game apiece. 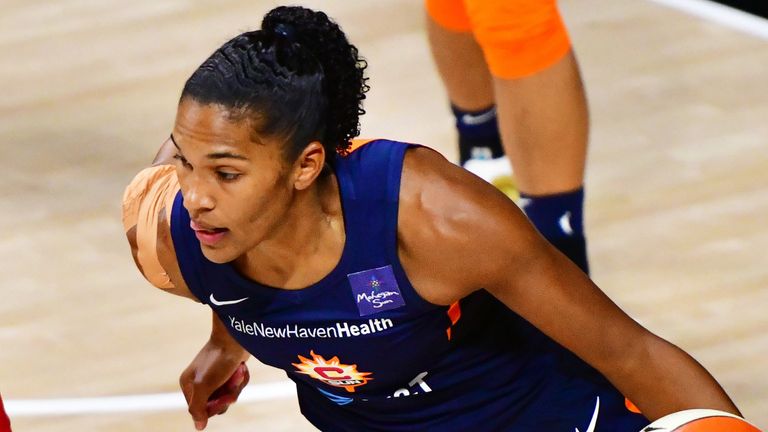 Alyssa Thomas finished with a 23-point, 12-rebound double-double, leading the Connecticut Sun to victory over the Las Vegas Aces. in Game 3 of the WNBA semi-finals

Connecticut responded in Game 3 as Alyssa Thomas made a surprise return from injury (she dislocated her shoulder in Game 2) to post a 23-point, 12-rebound double-double to lead to Sun to a 77-68 win.

Which team are still fighting for the WNBA championship?

Her team-mates stepped up, too. Brionna Jones had 15 points and 10 rebounds, and DeWanna Bonner recorded 12 points and 10 boards for the Sun. It was the first time in WNBA postseason history a team had three players with double-doubles in points and rebounds in a single game.

Will the Aces hit back in Game 4 with their season on the line? Much will depend on MVP Wilson, who averaged 20.5 points, 8.5 rebounds, 2.0 assists, 2.0 blocked shots and 1.23 steals in 31.7 minutes per game over the 22-game regular season. The 6ft 4in forward led the WNBA in blocks, ranked second in scoring and finished sixth in rebounding.

However, support from Kayla McBride, Angel McCoughtry and Sixth Woman of the Year Dearica Hamby will be essential if the Aces are to keep their title hopes alive.

Want to watch even more of the WNBA but don't have Sky Sports? Get the Sky Sports Action and Arena pack, click here.