LeBron James' ambition of a first NBA championship with the Los Angeles Lakers was put on hold by the Miami Heat and a spectacular Game 5 performance by Jimmy Butler.

James flexed his muscles high above his black Lakers jersey, looking too strong to stop.

He had just scored while being fouled, finishing a three-point play that gave Los Angeles a one-point lead with 1:34 remaining. When the Lakers fell behind again, he put back his own missed shot to give them a lead again with 58 seconds to go. 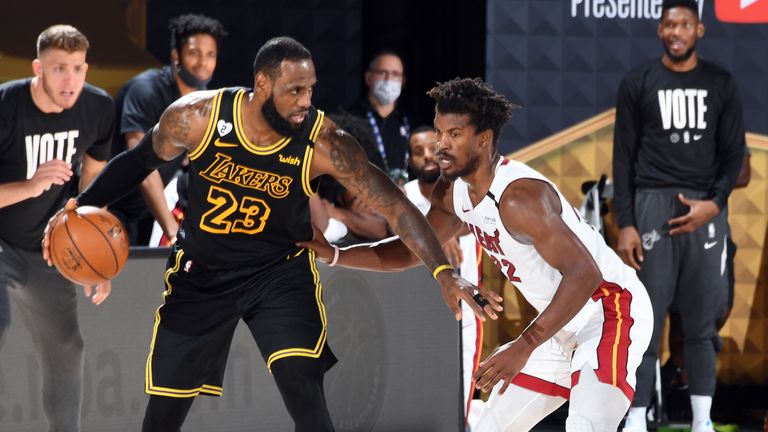 James was trying to do everything it took to knock out the Miami Heat and deliver the Lakers a championship, but he needed one more chance.

He couldn't get it.

James finished with 40 points, 13 rebounds and seven assists, but gave up the ball to Danny Green for a wide-open three-pointer and couldn't get it back on the Lakers' possession in the waning seconds of a 111-108 loss on Friday night in Game 5 of the NBA Finals.

The Lakers took their last timeout after Jimmy Butler's free throws gave the Heat a 107-106 lead with 16 seconds to play. James drove and then passed out of a double-team to Green, who was short on the open three-pointer. 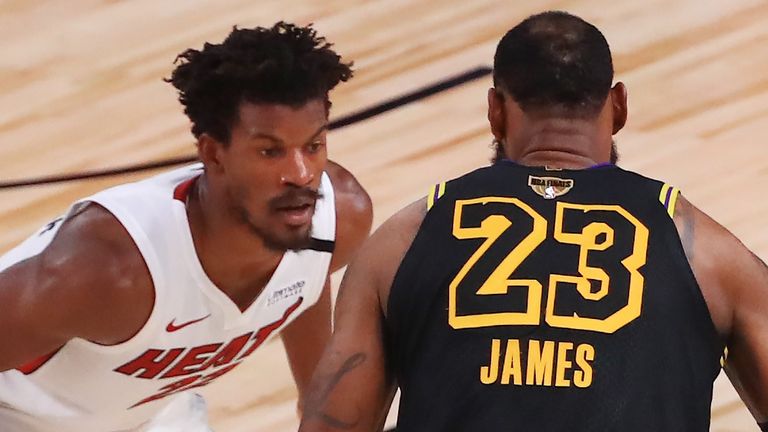 "He was ready to take on the whole team," Lakers coach Frank Vogel said. "He had two guys on him. A third defender came and so with three guys on you, he made the right play. Danny is one of our best shooters, he had a great look, and we live with the results."

James felt the same way. He has always believed in making the right pass instead of forcing a bad shot, and Green's miss won't change that.

"I mean, if you just look at the play, I was able to draw two defenders below the free throw line and find one of our shooters at the top of the key for a wide-open three to win a championship," James said. "I trusted him, we trusted him, and it just didn't go. You live with that."

Markieff Morris got the rebound and tried to throw the ball inside to Anthony Davis but misfired it out of bounds while James stood helplessly near the right sideline. If he had got the ball back, perhaps he would have scored. A few minutes later, he might have had the Larry O'Brien Trophy and then an NBA Finals MVP trophy in his hands, just as he did in 2012, 2013 and 2016.

James had never missed a chance to close out an NBA Finals series after getting to three wins. In his 259th playoff game, tying Derek Fisher for most in NBA history, he was determined to finish this one off and send everyone home after three months in the bubble.

James made six three-pointers - some so deep they looked closer to midcourt than the basket - and kept bringing the Lakers back every time they fell far behind.

Los Angeles were down by 11 points 90 seconds into the fourth quarter when James made one of those three-pointers to ignite a 17-3 surge that provided a 99-96 lead. But Butler kept making big plays from the Heat and he pulled out the winning finish that James sought.

James had one final heave after Tyler Herro's free throws with 1.6 seconds left, but it was from near midcourt and wasn't close. 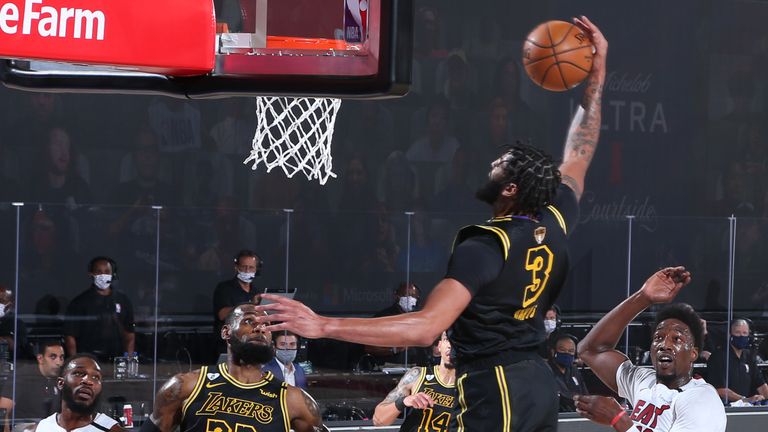 The Lakers then walked off the floor losers for the first time in their Black Mamba jerseys, co-designed and now worn in honour of Kobe Bryant. They will have to wait until the early hours of Monday morning (12:15am), live on Sky Sports Arena, to get another chance at their first title in a decade.

It is no sure thing now. Davis was hobbling at times with a foot injury. The bench that had been so good couldn't provide the boost James needed and the Lakers were helpless to stop Butler for the second time in the last three games.

There has been only one 3-1 lead overcome in the NBA Finals, and James was the catalyst that time with Cleveland in 2016. Now he has two more chances to prevent it.

"We have just got to be better in Game 6 and close the series," James said.