Jimmy Butler delivered another sublime performance to outduel LeBron James and lead the Miami Heat to a 111-108 win over the Los Angeles Lakers in Game 5 of the NBA Finals.

The enduring image of this thrilling and intense and entertaining game of the NBA Finals was Jimmy Butler sneaking away from the fray, slacking off and copping a break from work. Imagine the gall, the audacity, the sheer guts it must have taken to chill, even for a moment, while a compelling contest swirled all around him.

Well, sure, OK then. He did deserve that.

He did need to allow his burning lungs to expand and contract safely after he got fouled deep in the fourth quarter and then sauntered over and leaned on the railing surrounding the court for support. Because his coach, Erik Spoelstra, didn't have enough compassion to give him much rest on this night - or Spoelstra knew the Heat couldn't afford to allow it. Because this Game 5, a do-or-die for Miami's season, required whatever Butler could give, and then some.

Because, even at that delicate and quick moment of peace, his classic duel with LeBron James and the outcome of the game begged for more.

And so Butler did catch his breath with 16.8 seconds left before going to the free throw line and swishing two more and then proceeding to burn the candle on the other end, as he did time and time again on Friday night to enhance his basketball reputation and his team's chances of making this series better than anyone could have imagined.

"I left it all out there on the court," he said.

The Finals will go a sixth game because Butler played all but 48 seconds out of a possible 48 minutes and won his fourth-quarter stare-down with LeBron. LeBron James and Jimmy Butler put on masterful performances with some big plays down the stretch of Game Five.

Did you see this coming? Did you figure that Butler, a nice enough player who never reached MVP contention in his career, would get the best of an opponent who is on the Mount Rushmore of greats? Did you really see the Heat, after watching their 11-point lead evaporate on Friday night, fighting back by taking their cue from Butler to keep the Larry O'Brien Trophy stashed in a back room at the Disney campus for another day?

They have won a pair of games in this series against the heavily-favoured Lakers because Butler was epic twice now. He followed up a 40-point triple-double in Game 3 with a 30-point triple in Game 5. He got the best of LeBron on a night when LeBron sizzled and was locked into close-out mode.

"His will to win is remarkable," Spoelstra said. "To do that in 47-plus minutes and take the challenge on the other end... every young player coming into this league should study footage of Jimmy Butler, a definition of a two-way player competing on both ends. Remarkable, exceptional."

It's now 3-2 to the Lakers after the 111-108 loss, and while the series still leans in the direction of Los Angeles, with each game there is always a chance of something going wrong - like, an untimely injury that could spell doom.

Speaking of that, Anthony Davis spent the fourth quarter on one leg, caused by an ankle sprain in the first quarter, and he has only one day to heal up before Game 6 tips off in the early hours of Monday morning.

But that's a conversation for later. Right now, this is about Butler and LeBron and their ridiculous stat lines, which don't fully explain how their back-and-forth buckets made for must-see basketball in the tense closing moments.

And craziest of all, that brilliance was capped by Danny Green missing a potentially championship-winning three-pointer with seven seconds left. 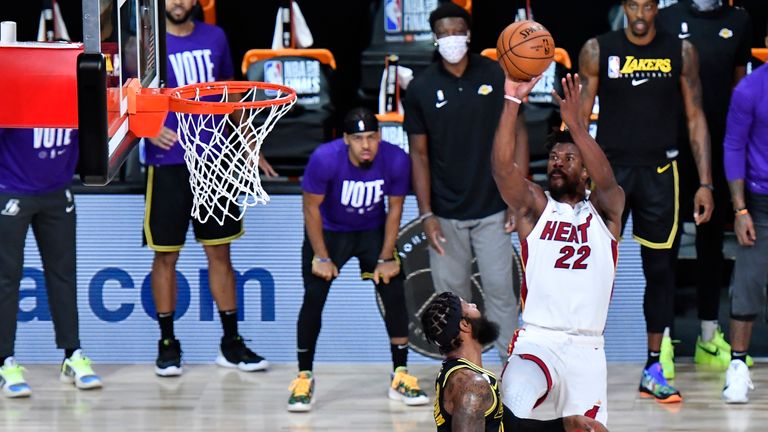 Jimmy Butler got the better of Markieff Morris to put Miami ahead by one point with just over a minute to go in Game Five.

This was Butler: 35 points, 12 rebounds, 11 assists, five steals. He scored nine of the Heat's last 11 points. He feasted on mid-range shots and lay-ups, further damaging his reputation among the analytics crowd. He was 12-for-12 from the free throw line. He took command in most of the crucial moments and possessions, saving a few for the undrafted Duncan Robinson, who blistered from deep by making 7-of-13.

And he took the task of guarding LeBron, burning calories on the other end of the court as well.

This was LeBron: 40 points, 13 rebounds, seven assists, three steals. He shot 6-for-9 on three-pointers. He also charged the rim, especially late in the game, dropping lay-ups and sometimes drawing fouls.

LeBron also made the right basketball play on the Lakers' final possession when he threw to an open Green rather than compete against a Miami double team with the Lakers down a point in the final 20 seconds. It was indeed the right play, one that was made twice by Michael Jordan to win championships.

That said, Green hasn't been right from the three-point line throughout much of the playoffs - or much of the season, actually. His miss wasn't much of a surprise. Many others who found themselves in those moments in previous NBA Finals - Robert Horry, Steve Kerr, Ray Allen, John Paxson, Kyrie Irving - flourished, not floundered.

"I was able to draw two defenders from below the free throw line and find one of our shooters for a wide-open three to win the championship," LeBron explained. "I trusted him. I know he wished he could have it again. I wish I could have made a better pass. You live with it."

Making matters worse for the Lakers on that possession was Markieff Morris mindlessly throwing the rebound away; he just suffered brain-lock. It delayed a Lakers coronation and kept the Disney campus populated for at least two more days and gave the Heat a sense of confidence in a series that nonetheless requires them to keep climbing mountains. 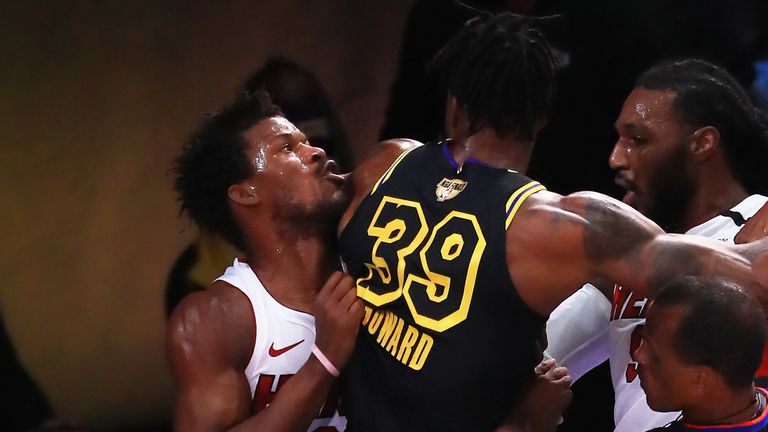 Jimmy Butler and Dwight Howard tangled up in the first quarter, receiving a personal foul and a double technical foul respectively.

Butler was still talking up his team-mates well into the night, saying how he liked their chances even if the world doesn't.

"We (are) built for this. We (have) been doing this all year long. This didn't start in the bubble. We are so together on the floor, off the floor, that is why we win. That is how we are going to play from here on out. We ain't backing down, we ain't shying away. We still fight. We are not scared of nobody. We are in it to win it." Actually, a large part why the Heat have won two games is Butler, and despite the Lakers defense now paying him all sorts of respect, he has something to say about that, too.

"No matter how they are going to guard me I am going to make the right play. That is what my team asks of me. That is what they need me to do. I know that I am capable of it, but I have a great group of guys who make it a hell of a lot easier. They give me a lot of confidence to go out there and hoop. 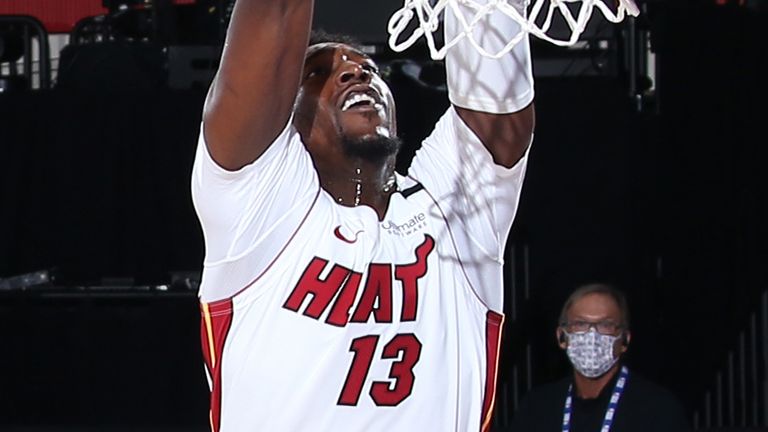 "It's easy whenever I have a group of guys around me and a coach who thinks I can play at a high level. I got so many people in my ear to tell me to keep doing what I'm doing. I know I am capable of it. I believe in my skill set and talent."

The next game of the NBA season was supposed to take place in January or February or whenever science decided to allow the league to write a specific target date for 2021 in ink. Instead, the 2020 season and the 2020 NBA Finals will get at least one more game, in a few days.

In a best-case scenario for Miami, there will be more from Butler both in terms of minutes and poise. And plenty from Robinson, who has the green light even with defenders hanging on him. As Spoelstra said, "(Duncan) and Tyler (Herro) are sticks of dynamite, they can go off at any time." And maybe the determination and hustle from the Heat can make the Lakers flinch.

For the Lakers, it's all about Davis and his ankle and if a third impact player will surface. And maybe next time, Green makes the shot, assuming LeBron still has confidence in him.

The NBA Finals just perked up. This is a series after all.