Giannis triple-double as Bucks beat Pacers; Embiid and Harris drive Sixers past Hornets; Beal's 32 points torches Heat; Sky Sports coverage of the NBA continues on Thursday night when the Golden State Warriors travel to Dallas, join us from 12.30am on Sky Sports Arena 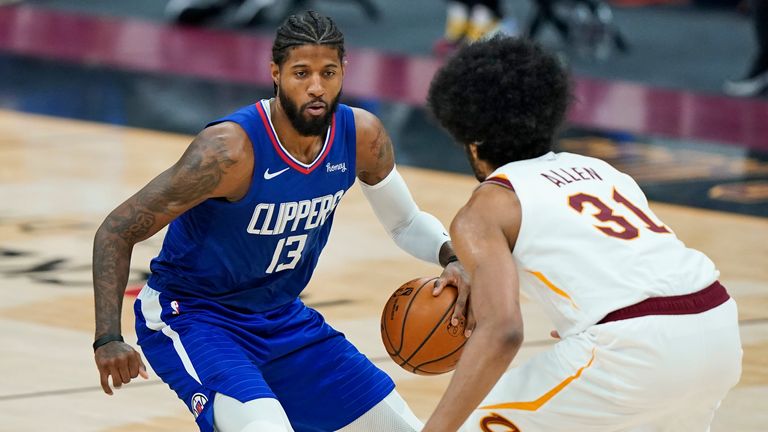 Paul George shot 8-for-9 from 3-point range and scored 36 points to lead the Los Angeles Clippers to a 121-99 win against the Cavaliers in Cleveland on Wednesday night.

Kawhi Leonard scored 24 points, Lou Williams had 15 and Serge Ibaka added 14 points for Los Angeles, which finished 4-2 on its road trip. Collin Sexton scored 16 of his 27 points in the first half for Cleveland, and Darius Garland contributed 23 points.

Andre Drummond had 13 points and five rebounds in 22 minutes after missing Cleveland's 100-98 win against the visiting Minnesota Timberwolves on Monday due to a sore lower back. 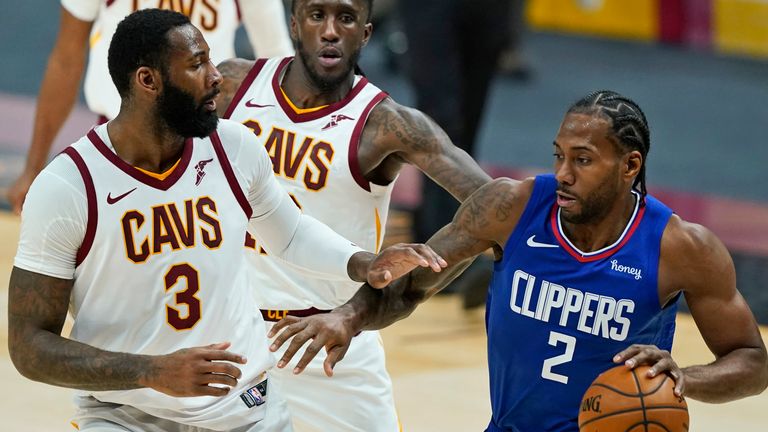 Highlights of the Los Angeles Clippers up against the Cleveland Cavaliers in Week 7 of the NBA.

Jarrett Allen, who started for Drummond on Monday and totalled 23 points and 18 rebounds, had seven points, nine rebounds and five assists in 26 minutes off the bench Wednesday.

The Clippers improved to 4-0 in the second half of back-to-back sets this season. They were once again without Patrick Beverley for a sixth straight game because of a knee injury. Reggie Jackson continued to start in his place, and he went scoreless with three assists in 23 minutes. 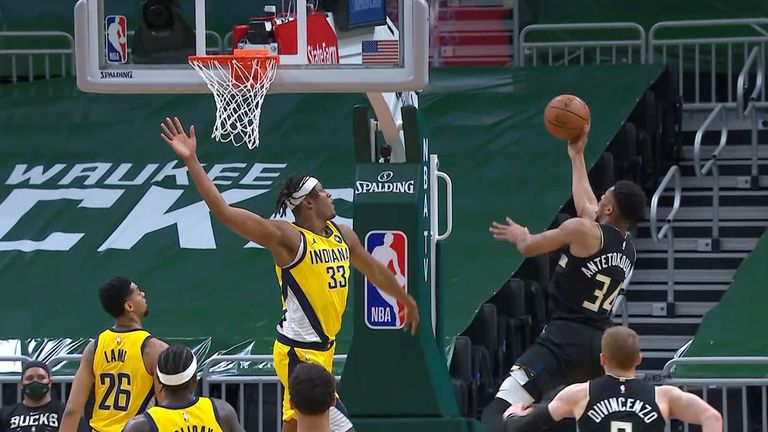 Highlights of the Indiana Pacers up against the Milwaukee Bucks in Week 7 of the NBA.

Giannis Antetokounmpo recorded his third triple-double of the season to propel the Milwaukee Bucks to a run-away, 130-110 victory over the visiting Indiana Pacers.

Antetokounmpo needed just 31 minutes to put up 21 points, a game-high 14 rebounds and a season-high-tying 10 assists for the 21st triple-double of his career, the sixth accomplished in 31 or fewer minutes. 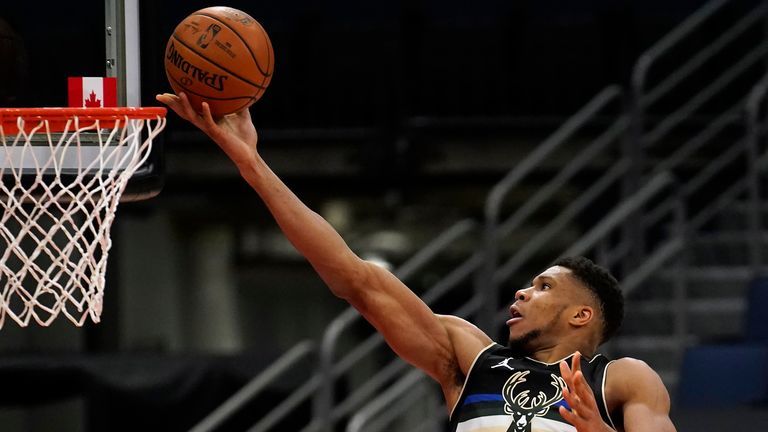 With his 21st triple-double, Antetokounmpo moved into a tie for 22nd on the NBA's all-time list with four others, including Kobe Bryant and Kareem Abdul-Jabbar.

The meeting was the first of the season for the Central Division rivals and also featured a get-together of all three of the NBA's Holiday brothers. Each scored in double figures. Jrue contributed 11 to the Milwaukee win, while Justin had 15 points and Aaron 11 for Indiana.

Milwaukee went on to lead by as many as 23 in the second quarter and 36 in the third before giving its key players all or most of the fourth period off.

Bryn Forbes supported Antetokounmpo with a season-high 20 points, while Bobby Portis had 18, DiVincenzo had 16, Middleton 12 and Lopez 11. Forbes, Portis and DiVincenzo drilled four 3-pointers apiece, helping the Bucks run up a total of 21. Milwaukee outscored the Pacers 63-33 on threes.

Domantas Sabonis complemented a game- and season-high 33 points with a team-high 12 rebounds for the Pacers, who have lost three of four. 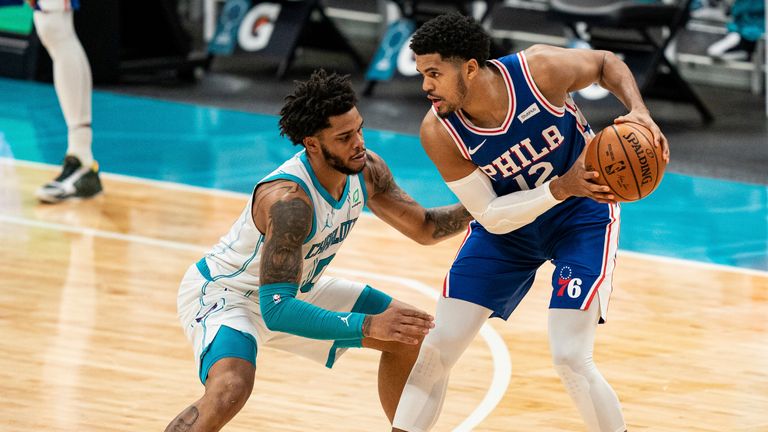 Highlights of the Philadelphia 76ers up against the Charlotte Hornets in Week 7 of the NBA.

Joel Embiid scored 34 points and Tobias Harris added 26 to help the Philadelphia 76ers complete a perfect three-game road trip with a 118-111 victory over the Charlotte Hornets.

Embiid showed no ill effects of back soreness that forced him to sit out Philadelphia's 119-110 victory over the Indiana Pacers on Sunday. The Eastern Conference Player of the Month for games in December and January scored 20 points in the first half while Harris had 18 in the second.

Danny Green finished with 16 points, Ben Simmons scored 15 along with nine assists and Shake Milton added 13 off the bench for the 76ers, who made 25 of 45 shots from the field (55.6 percent) to secure a 64-42 lead at halftime.

Philadelphia staved off a late rally to win its third meeting with the Hornets this season and 14th straight in the series dating back to the 2016-17 campaign.

Gordon Hayward and rookie LaMelo Ball each scored 22 points and Devonte' Graham had 18 points and seven assists for the Hornets, who saw their three-game winning streak come to a halt. Ball and Miles Bridges (16 points, eight rebounds) were inserted into the line-up in place of Terry Rozier (ankle) and P.J. Washington (foot). Highlights of the Washington Wizards up against the Miami Heat in Week 7 of the NBA.

Bradley Beal, who leads the NBA in scoring, posted a game-high 32 points, leading the Washington Wizards past the Heat in Miami 103-100.

With the Wizards ahead 101-100, Miami's Goran Dragic missed a closely guarded drive with 9.9 seconds left. Ish Smith grabbed the deflected rebound and made two free throws.

On Miami's final possession, which started with 5.8 seconds left, Tyler Herro missed an off-balance 3-point attempt from beyond the top of the key, and that was the game.

The Wizards, who trailed by as many as 13 points in the first half, won for just the second time in the past seven games.

Miami, which lost its second straight game, was led by Herro, who had 20 points and made 4 of 9 from 3-point range. Jimmy Butler amassed 19 points, nine assists and eight rebounds, and Bam Adebayo had 17 points and 11 rebounds.

Beal made 11 of 23 shots, including 4 of 11 3-point attempts. Beal also had eight rebounds and four assists, and he turned in his 40th consecutive game with at least 20 points. 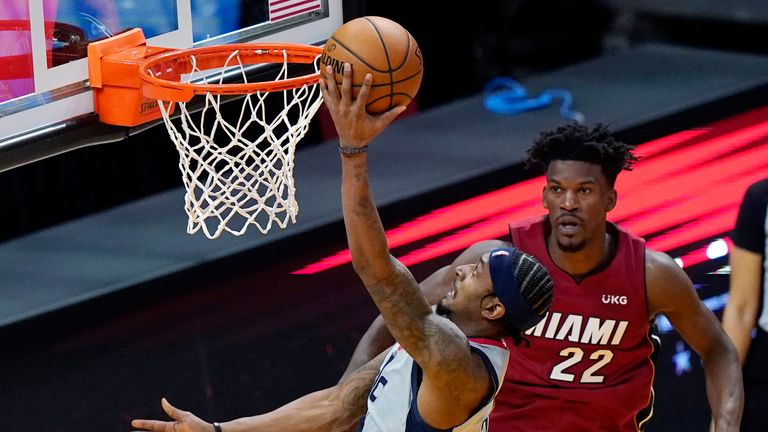 Russell Westbrook, coming off a triple-double on Tuesday in the Wizards' loss to the Portland Trail Blazers, was rested on Wednesday. 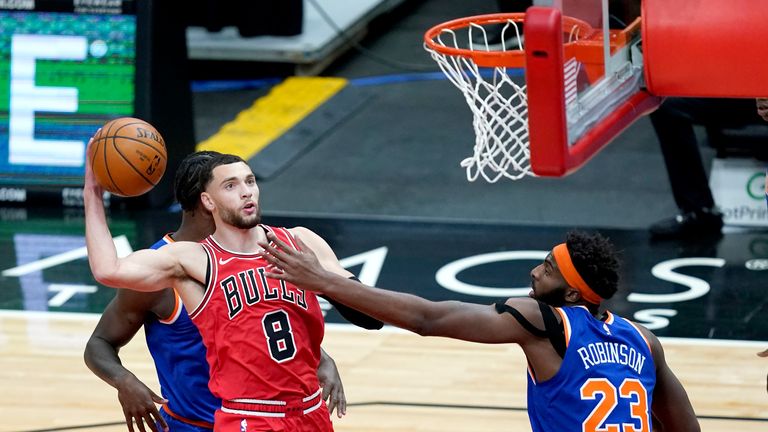 Highlights of the New York Knicks up against the Chicago Bulls in Week 7 of the NBA.

The Knicks avenged Monday's eight-point loss to the Bulls to earn a split of the back-to-back series by shooting 48.3 percent, including 50 percent from 3-point range.

New York outscored Chicago 62-50 in the paint. RJ Barrett had 17 points for the Knicks, while Mitchell Robinson snagged 11 rebounds.

Poor perimeter shooting plagued the Bulls, who shot 6-for-36 (16.7 percent) from long range, including just two makes from deep in the second half. Chicago entered the game shooting 38.6 percent from 3-point range this season, fifth best in the NBA.

Zach LaVine had 24 points and seven assists for Chicago, which has lost four of five. Thaddeus Young (19 points), Denzel Valentine (13), Coby White (13), and Patrick Williams (12) followed in double figures. Williams had a team-high seven rebounds as the Bulls were outrebounded on the night, 57-44.