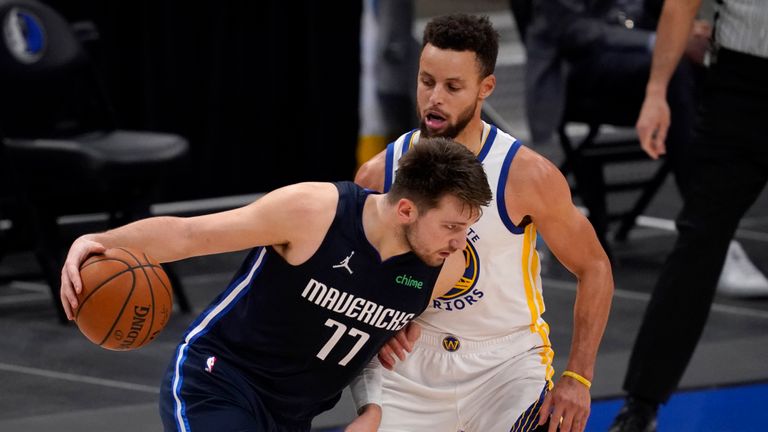 Steph Curry's 57-point night was not enough as Luca Doncic racked up a season-best 42-points to help the Dallas Mavericks overcome Golden State on Saturday. 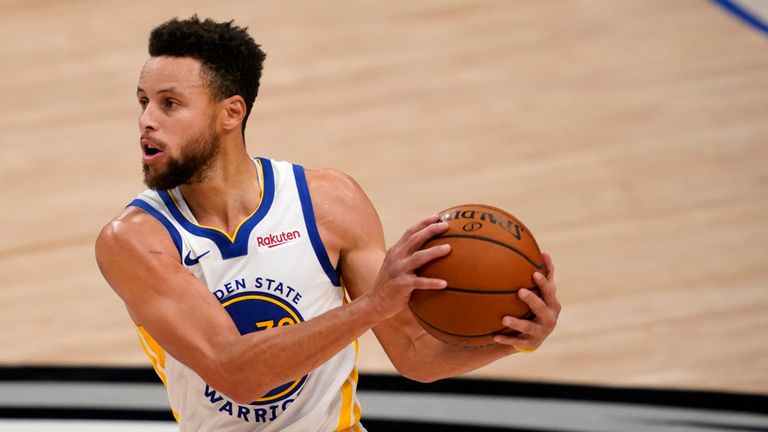 Steph Curry recorded the 2nd-highest scoring game of his career as the Golden State Warriors were beaten by the Dallas Mavericks.

Curry may have won his individual duel with Luka Doncic but it was the host Dallas Mavericks who captured the team honours in a wild 134-132 victory over the Golden State Warriors.

Curry landed 11 three-pointers en route to 57 points, but they weren't enough in Golden State's effort to complete a two-game sweep in Dallas - the Warriors had won 147-116 on Thursday night.

Doncic countered with a season-best 42-point performance, including a clutch three-pointer with 44.5 seconds remaining that opened a seven-point lead.

Damion Lee's tip-in with seven-tenths of a second completed the scoring.

Curry's 57 points came on 19-for-31 shooting overall and 11-for-19 from deep, it was his second-highest scoring game of the season, having gone for 62 against Portland in January. 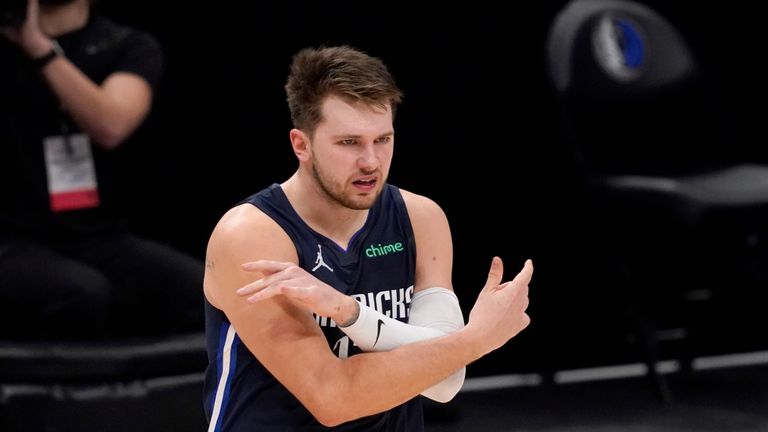 Luka Doncic ties his career-high with 42 points and drops 11 assists as the Dallas Mavericks beat the Golden State Warriors, take a look at his three-pointers.

Doncic made 12 of his 23 shots and seven of his 12 3-pointers. He also found time for 11 assists and seven rebounds.

Andrew Wiggins had 22 points and Kent Bazemore 20 for the Warriors, who have alternated wins and losses in their last six games.

LeBron James had 33 points, 11 assists and four steals, and the Los Angeles Lakers held off the visiting Detroit Pistons 135-129 in double overtime on Saturday. Highlights of the Detroit Pistons against the Los Angeles Lakers in Week 7 of the NBA.

Jerami Grant had 32 points and reserve guard Josh Jackson scored 25 of his 28 points in the second half but the Pistons lost their fourth in a row.

Jackson finished with five 3-pointers. Delon Wright had 22 points on 8-of-10 shooting, making all four of his 3-pointers, and 10 assists, while Mason Plumlee added 15 points, eight rebounds and six assists. Take a look at the top points from Jerami Grant, Anthony Davis and LeBron James as the Los Angeles Lakers beat the Detroit Pistons in double overtime.

James' layup with 2:10 remaining in the second overtime gave the Lakers the lead for good at 123-122. His three-pointer with 33.6 seconds left sealed the deal as the Lakers avoided being beaten for the second time this season by the NBA's worst team.

Joel Embiid had 33 points and nine rebounds to carry the host Philadelphia 76ers past the Brooklyn Nets with a 124-108 win. 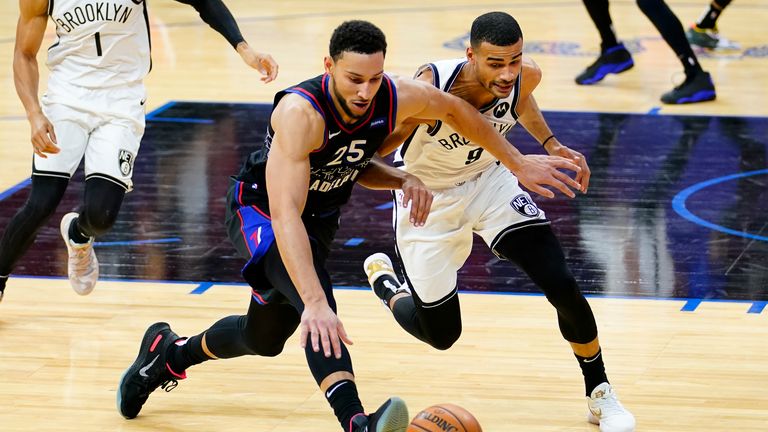 The Sixers improved to 13-0 this season with their starting five of Embiid, Simmons, Harris, Green and Curry.

The Nets were without Kevin Durant due to health and safety protocols and Kyrie Irving because of a sprained right index finger but James Harden led the way with 26 points, 10 assists and eight rebounds.

Curry dropped in a three-pointer from the corner and Milton added a tip-in in the final few seconds as the Sixers led 59-56 at halftime. After the game was tied at 79, the Sixers scored eight straight, including consecutive three-pointers by Green, to lead by eight with 4:10 left in the third.

The Nets continued to struggle offensively, going more than four minutes without a field goal as Philadelphia extended their spurt to 14 in a row.

Head coach Steve Nash rested Harden, Harris and Green at the start of the fourth and the Sixers pulled ahead 107-89 in the first minute. Brooklyn sliced the deficit to 10, 116-106, with 2:43 to go but the Sixers scored the next five points to put the game away.

Payton scored 22 points for the Knicks, who have won two straight. Julius Randle (22 points, 11 rebounds) had a double-double while Barrett finished with 18 points. 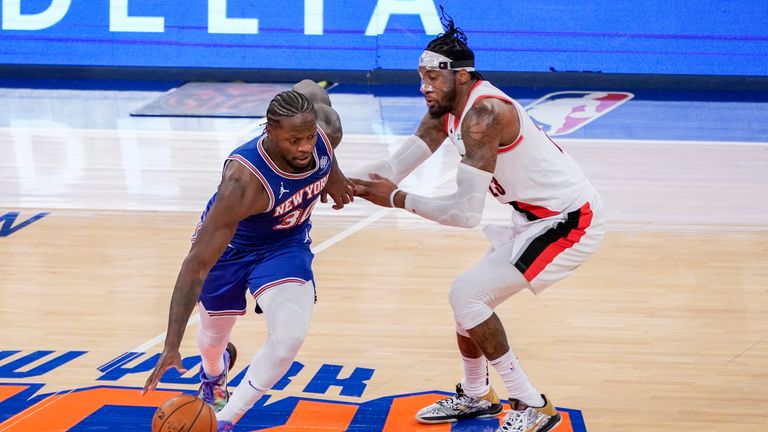 Reggie Bullock scored 10 points while Alec Burks (16 points) and Immanuel Quickley (12 points) each got into double digits off the bench.

Damian Lillard, who missed Thursday's 121-105 win over the Philadelphia 76ers with an abdominal injury, had 29 points and nine assists for the Trail Blazers, who went 3-3 on a six-game road trip.

Carmelo Anthony, who won the NBA scoring title while leading New York to their most recent playoff berth in 2012-13, was limited to two points in 17 minutes.

Giannis Antetokounmpo recorded 24 points and 11 rebounds to propel the visiting Milwaukee Bucks to a 124-99 victory over the Cleveland Cavaliers, who have now lost seven of their last nine games. 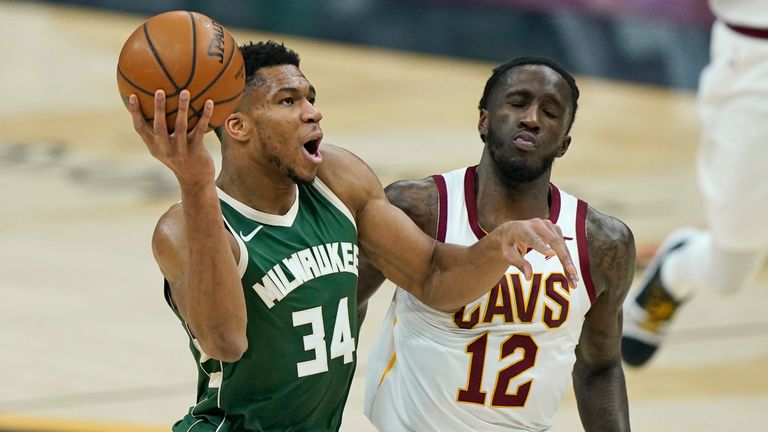 Antetokounmpo added five assists, one day after collecting 33 points and 12 rebounds in the Bucks' 123-105 victory over Cleveland.

Milwaukee's Jrue Holiday and Khris Middleton each had 20 points and Bryn Forbes made six three-pointers to highlight his 18-point performance.

The Bucks outscored the Cavaliers by a 65-45 margin in the second half to post their season high-tying fourth win in a row overall.

Andre Drummond recorded 28 points and 11 rebounds for Cleveland, who had Larry Nance Jr. back in the line-up and he scored four points on his return from a wrist injury. 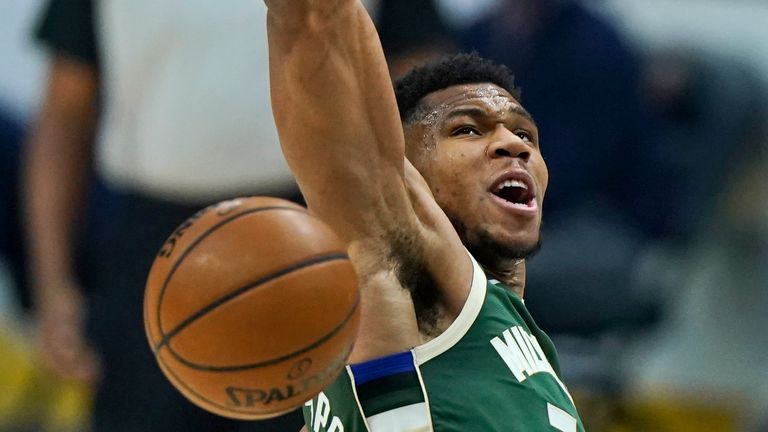 Giannis Antetokounmpo produced the dunk of the night for the Milwaukee Bucks against the Cleveland Cavaliers.
NBA Fantasy 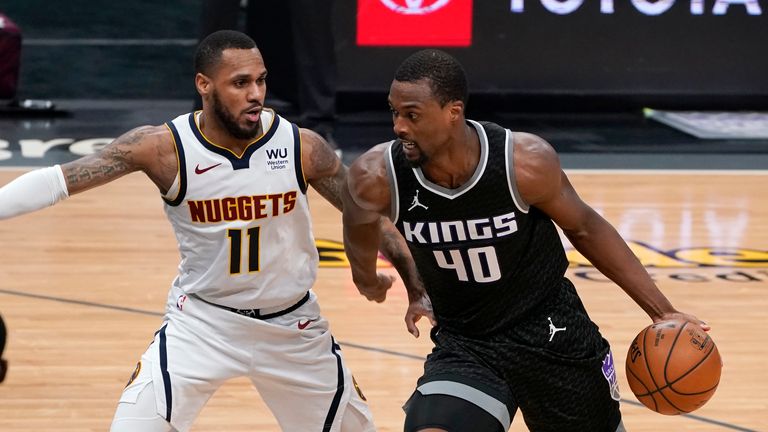 The Kings have won all three meetings this season against the Nuggets and continued their recent hot stretch, winning for the sixth time in their past seven games - Denver has lost three of their last four.

Jokic shot 20 of 33 from the field and carried the load for Denver, which was without Jamal Murray, who sat out with left-knee soreness. Murray has averaged 19 points and 5.4 assists per game.

Jokic's big scoring night also came with 12 assists and eight rebounds for a Nuggets team that were without Gary Harris (left adductor strain), who missed his second consecutive game, and P.J. Dozier (right hamstring strain) for the fifth game in a row.

Shai Gilgeous-Alexander scored 13 of his 31 points in the fourth quarter to help the Oklahoma City Thunder to a 120-118 win over the visiting Minnesota Timberwolves. 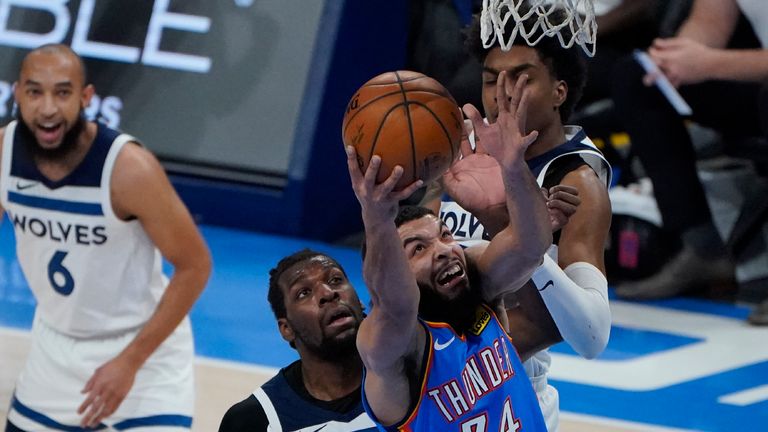 Minnesota had a chance to tie or take the lead twice more, including on Naz Reid's drive in the closing seconds, but the Timberwolves couldn't finish it off and Oklahoma City picked up a split in the back-to-back series.

Oklahoma City's strong close spoiled a career night from Reid, who finished with 29 points. Anthony Edwards added 20 for the Timberwolves.

The Thunder had seven players score in double figures, including 22 off the bench from Mike Muscala.

Zach LaVine scored 39 points and Denzel Valentine added a season-high 20 to boost the visiting Chicago Bulls to a 118-92 victory over the Orlando Magic. 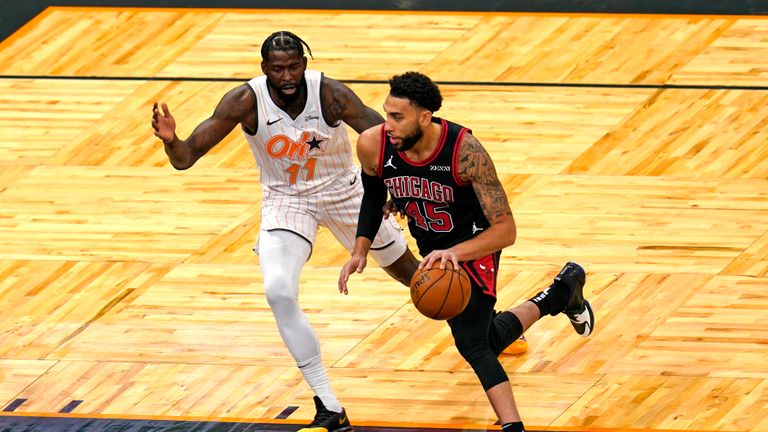 Chicago avenged a narrow loss at Orlando on Friday to earn a split of the back-to-back at Amway Center.

The Bulls led by as many as 33 points in the third quarter, their largest advantage of the season, while holding an opponent under 100 points for the first time.

Fuelled by a career-high 43 points from Nikola Vucevic during Friday's 123-119 win against Chicago, the Magic struggled offensively Saturday, shooting 38.9 per cent.

Trae Young returned to the Atlanta lineup to score 28 points and help the Hawks defeat the Toronto Raptors 132-121 to end their three-game losing streak. Take a look at Trae Young's 13 assists as the Atlanta Hawks beat the Toronto Raptors.

Young was back in the lineup after missing Thursday's game with a right thigh bruise. He was 14-for-14 at the line and had 13 assists. The Hawks had scored only 91 points against Utah without Young. 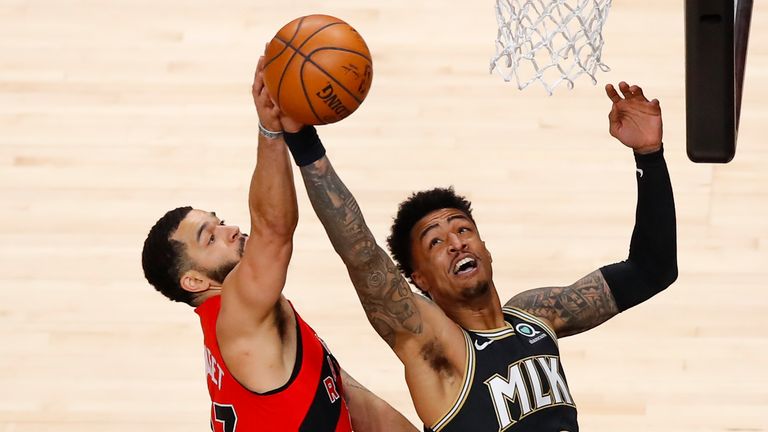 Toronto were led by Chris Boucher, who came off the bench to make 10 of 13 field-goal tries and score a career-high 29 points, eclipsing his previous high of 25. Fred VanVleet added 25 points and 10 assists and Norman Powell scored 20 points.

Atlanta was without second-leading scorer De'Andre Hunter (right-knee discomfort) for the fourth straight game but get an extended break until their return on Wednesday while the Raptors play the fourth game of their six-game road trip on Monday.

DeMar DeRozan scored a game-high 30 points and repeatedly delivered down the stretch of the San Antonio Spurs' 111-106 win over the hot Houston Rockets on Saturday. DeRozan added eight rebounds and seven assists to his ledger. He sank four late free throws and completed a three-point play with 63 seconds left that provided the Spurs a 107-102 lead.

Houston, who trailed by as many as 13 points in the second half, had secured their first lead of the game at 102-100 on a John Wall pull-up jumper with 3:29 remaining.

However two Jakob Poeltl free throws evened the score and DeRozan took over from there to carry the Spurs to victory.

Five other Spurs scored in double figures. Derrick White tallied 14 points, including a trio of baskets in the fourth quarter, each coming after the Rockets cut the deficit to one point.

Wall led the Rockets with 27 points and seven assists while DeMarcus Cousins posted a double-double of 12 points and 11 rebounds. Eric Gordon (26 points) was one of three Houston reserves to score in double figures, with David Nwaba scoring 14 and Danuel House Jr. 12.

New Orleans recorded a third straight victory as Brandon Ingram, Zion Williamson and Eric Bledsoe each scored more than 20 points as the in the Pelicans 118-109 victory over Memphis Grizzlies. Williamson scored 29, Ingram had 27 points and 12 rebounds and Bledsoe added 21 points to lead a fourth-quarter surge as the Pelicans won three in succession for the first time this season and claimed their fifth victory in the last seven games. Lonzo Ball added 16 points.

The Pelicans, playing on a back-to-back after a 114-113 victory at Indiana on Friday, won the first meeting against the Grizzlies, who they swept in three meetings last season.

Jonas Valanciunas returned from a five-game absence due to having COVID-19 to score 23, Kyle Anderson added 21 and Ja Morant had 16 to lead the Grizzlies, who lost their third straight.