Sky Sports' live coverage of the NBA continues on Sunday evening as the Boston Celtics take on the Washington Wizards at 6pm, live on Sky Sports Arena

The Nets cruised past the Warriors for the second time this season, while Devin Booker led the Suns to their fifth-straight win and the Utah Jazz continued their rich vein of form. 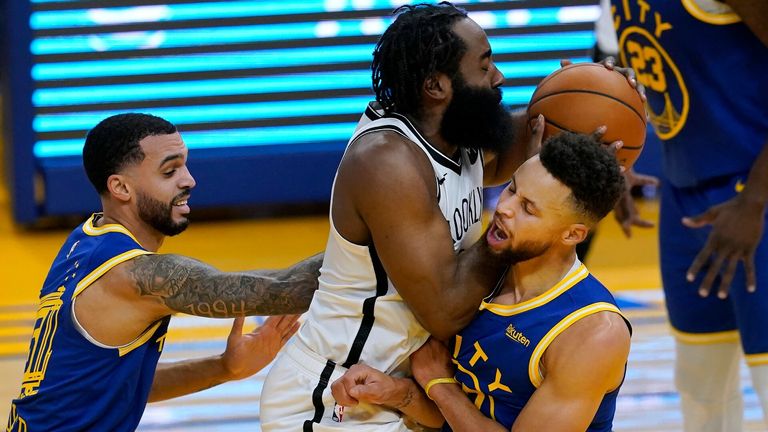 Kevin Durant scored 20 points in his return to the San Francisco Bay Area and Brooklyn's Big Three were firing on all cylinders on Saturday night as the Nets opened a Western Conference swing with a front-running, 134-117 victory over the host Golden State Warriors.

Kyrie Irving paced the Nets with 23 points, while James Harden complemented a game-high 16 assists with 19 points, helping Brooklyn complete a dominant season-series sweep from the Warriors.

The Nets crushed Golden State 125-99 in Brooklyn on Opening Night. Stephen Curry led all scorers with 27 points, but shot just 2-for-9 on 3-pointers as the Warriors misfired on 25 of their 34 3-point attempts.

In the opener of a five-game trip, the Nets led by 15 at halftime, then busted the game open with a 42-point third quarter during which Irving had nine points and Durant eight, while Harden assisted on six buckets and bombed in a pair of 3-pointers of his own.

Harden went 5-for-8 on 3-pointers, while also finding time for a team-high eight rebounds and three steals.

Bruce Brown chipped in with 18 points, Joe Harris with 15 and Jeff Green with 14 for Brooklyn, which has won two straight after a three-game losing streak.

Andrew Wiggins and Kelly Oubre Jr. backed Curry with 17 points apiece for the Warriors, who saw a two-game winning streak come to an end. Oubre completed a double-double with a game-high 10 rebounds. 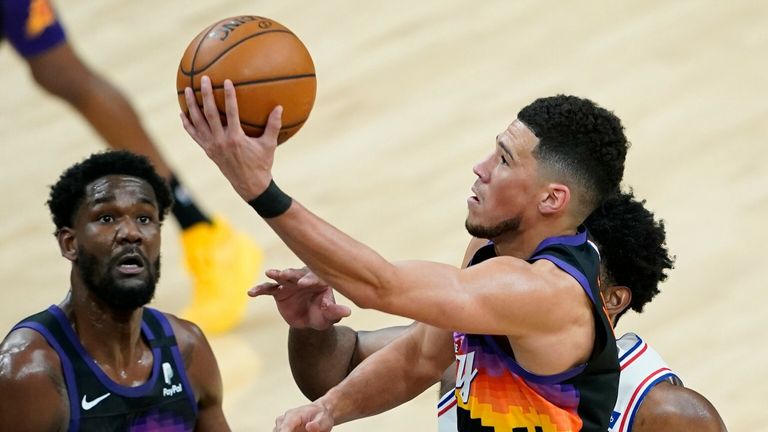 Chris Paul, a 10-time All-Star, added 18 points, 10 assists and eight rebounds for the Suns, who won their fifth in a row.

Simmons hit a tough layup to give the Sixers a 42-41 lead with 4:36 remaining in the second quarter. Booker knocked down a 15-foot jumper to tie the game at 47 with 2:18 left. Embiid tapped in his own shot with 0.5 seconds to go to equalize at 53 by halftime.

Paul came out aggressive with a jumper and a 3-pointer to quickly put the Suns ahead 60-55 less than two minutes into the third.

The Sixers eventually capitalized on a pair of Suns turnovers and took a 72-67 advantage midway through the third. Booker stayed hot throughout the third, as he scored 16 points alone for the Suns, who led 86-81 at the end of the quarter.

Phoenix opened with a pair of treys to begin the fourth and the lead suddenly expanded to 92-81. Embiid responded with two free throws and a dunk to close the Sixers within 92-85. Embiid later dropped in a fadeaway to cut the deficit to 102-97 with 5:37 remaining.

Booker made a 3-pointer to key a 7-0 spurt and the Suns led 109-97 with 3:59 left. The cushion was more than enough to propel them to a season-best fifth straight win. 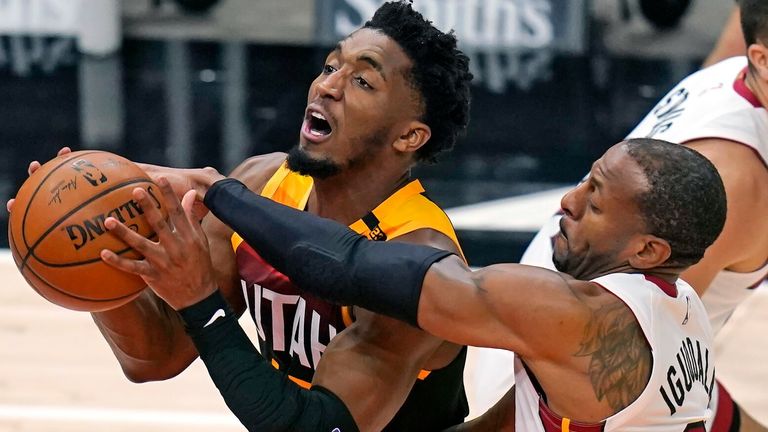 The Jazz held Miami scoreless over six-minute stretches of both the second and third quarters, turning a close game into another blowout.

"We know the shots are not always going to fall," said center Rudy Gobert, who put up 16 points, 12 rebounds and three blocks. "But we know we get a chance to win every single night with our defense."

Bojan Bogdanovic added 19 points and Georges Niang had 14 for Utah, which has won 18 of its last 19 games since a 4-4 start.

The last team to go 18-1 over a 19-game span was Milwaukee in 2019. @EliasSports pic.twitter.com/UZAurY3tMA

The Heat had a four-game winning streak snapped.

Mitchell made three straight baskets in just 58 seconds, including back-to-back reverse layups, to spark a 16-0 Jazz run to open the second half. Royce O'Neale capped the run with a steal and slam, giving Utah a 63-42 lead.

Miami did not score its first points of the second half until Tyler Herro hit a jumper with 5:51 left in the third quarter. The drought lasted 14 straight possessions for the Heat.

Utah struggled to build any consistent rhythm on offense during the opening quarter against a tenacious Heat defense, going 1 for 12 from 3-point range. So the Jazz attacked the rim to get the offense going.

The shots started falling in the second quarter. Utah scored baskets on six straight possessions early in the period and tied it at 31 on a layup from Bogdanovic. Jordan Clarkson scored a basket and assisted on four others during that stretch.

Herro and Max Strus scored back-to-back baskets to make it 36-31 the Heat then missed eight straight shots and went six minutes without scoring.

Utah answered with a 14-0 run in that stretch to take a 45-36 lead. The Jazz finally went ahead for the first time on back-to-back baskets from ONeale and Clarkson. 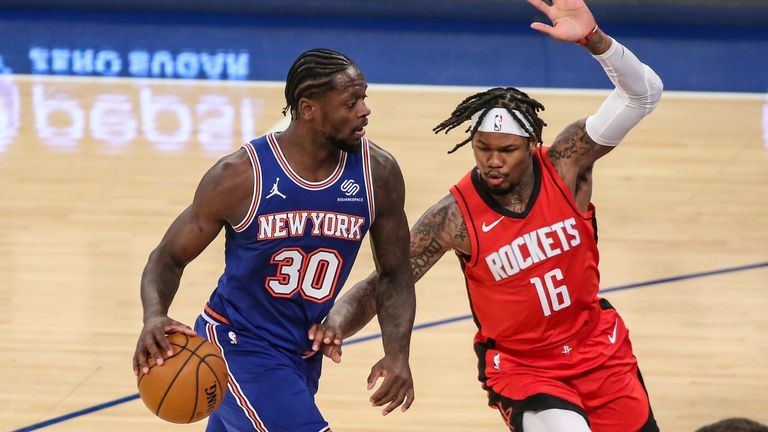 Quickley, one of six Knicks to score in double figures, shot 7 for 9 from the floor and drilled four 3-pointers.

The Knicks opened a stretch of 7 of 8 games at home in impressive fashion, securing the lead in the first quarter before maintaining control by outpacing the Rockets from behind the arc and in the paint. The Knicks posted a 60-44 advantage on paint points and hit 12 of 28 of their 3-pointers.

The Knicks widened their early lead to 17 points on two occasions in the second quarter, but Rockets guard John Wall almost single-handedly sliced that deficit to five points, keying a 10-1 run that cut the margin to 77-70 before adding a pair of free throws en route to 15 third-quarter points on 5-of-8 shooting.

But Quickley hit a trey at the 1:48 mark of the third and another with 29.7 seconds left in the quarter to push the lead to 87-75. He opened the scoring in the fourth with another 3-pointer at the 10:59 mark and the Knicks never looked back.

Wall finished with a game-high 26 points while Eric Gordon chipped in 24 points (but missed 6 of 7 from long range) for the Rockets, who made only 8 of 43 3-pointers while shooting 37.5 percent overall.

DeMarcus Cousins added 10 points and 10 rebounds for Houston, which played without starters Christian Wood (ankle) and Victor Oladipo (foot). The Rockets have dropped five consecutive games, all with Wood sidelined, after winning 7 of 8 games prior to the skid.

Julius Randle paired 22 points with nine rebounds for the Knicks, while Derrick Rose scored 16 points and Elfrid Payton added 15. New York played without center Mitchell Robinson, who will be sidelined for at least four weeks after breaking his right hand on Friday against the Wizards. 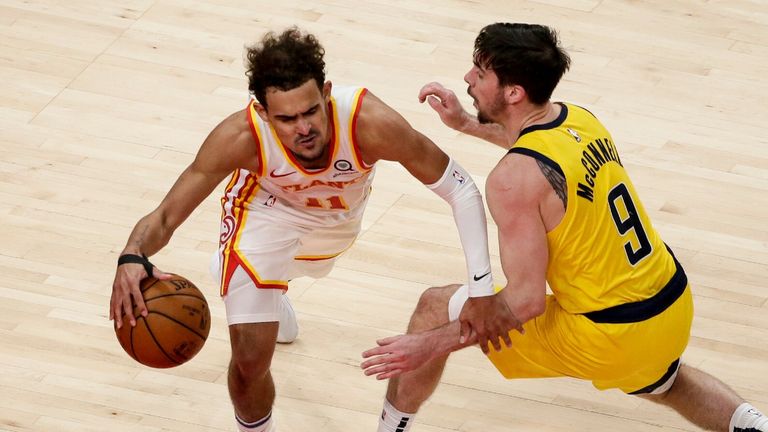 Aaron Holiday came off the bench to score a season-high 18 points and help the visiting Indiana Pacers erase a nine-point, fourth-quarter deficit to defeat the Atlanta Hawks 125-113.

Holiday was the catalyst of a 31-9 run, scoring 11 of his 16 second-half points in the final 7:23. Holiday, who finished 7-for-11 from the floor, put the team ahead for the first time in the fourth quarter when he followed his own a 3-pointer with a driving layup. He later added two more baskets after Atlanta tied the game for the final time at 105-105.

The Pacers won their second straight game while the Hawks lost for the six times in the past seven contests. The Hawks have won only nine of 16 games in which they led after three quarters. It was the third time they dropped both ends of a back-to-back.

Clint Capela had 24 points and 10 rebounds for Atlanta, and Danilo Gallinari came off the bench to score 20. John Collins and Cam Reddish each scored 18. 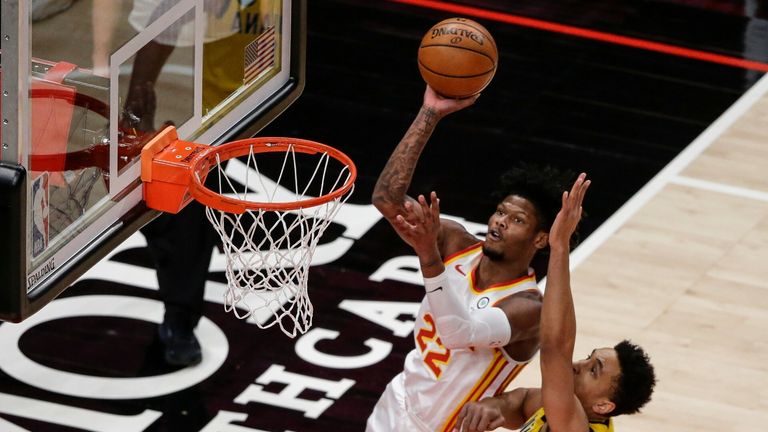 Trae Young had 15 points and 14 assists and played through an injury to his right thumb that required trainers to tape it up at halftime.