Sky Sports live coverage of the NBA continues on Thursday morning when the league-leading Utah Jazz host the defending champion LA Lakers, coverage begins at 3am on Sky Sports Arena 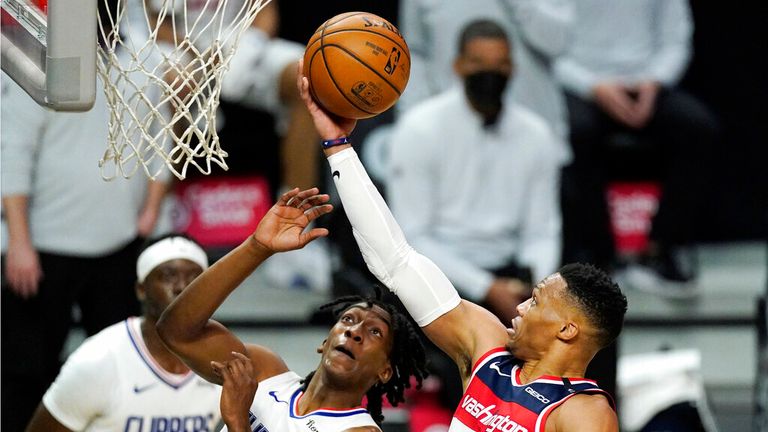 Highlights of the Washington Wizards' visit to the LA Clippers in Week 10 of the NBA.

Kawhi Leonard and Paul George teamed up for 62 points as the Los Angeles Clippers put an end to the Washington Wizards winning streak, while Nikola Jokic and Denver got the better of Damian Lillard and Portland in a thriller

Leonard connected on 13 of 20 shots and grabbed seven rebounds for the Clippers, who have alternated wins and losses the past five games. George hit 11 of 17 field-goal attempts, including 6 of 7 from three-point range, and pulled down six rebounds.

The Wizards, who were playing the second end of back-to-back contests after a 127-124 overtime victory against the Los Angeles Lakers on Monday, fell behind by 24 points early before making a run in the second half.

The Wizards wiped out nearly all of a 17-point halftime deficit to pull within 99-94 heading into the fourth quarter but the Clippers opened the final period with a 17-8 surge for a 116-102 edge after a three-pointer by Jackson with 6:39 left and controlled the contest the rest of the way.

Giannis Antetokounmpo flirted with a triple-double on Tuesday night, finishing with 37 points, eight rebounds and eight assists in a 139-112 Milwaukee Bucks victory over the visiting Minnesota Timberwolves. 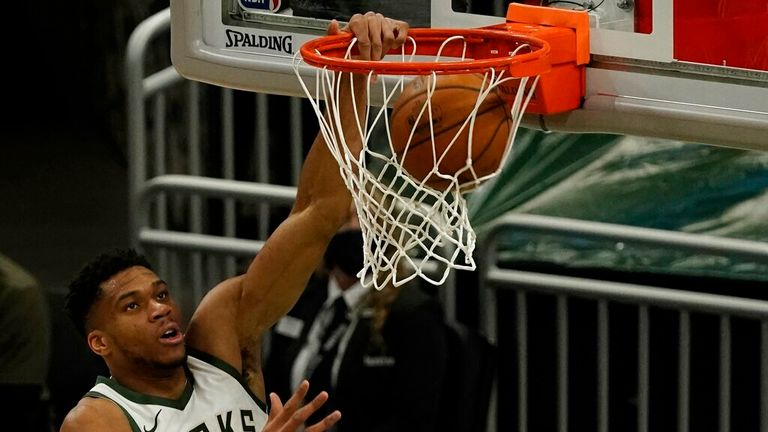 Antetokounmpo was one of seven Bucks who scored in double figures as Milwaukee won their third consecutive game and left the Timberwolves reflecting on a fifth consecutive defeat in their first game under new coach Chris Finch, who was hired on Sunday night after the team fired Ryan Saunders.

The Bucks played the fifth game of their current eight-game home run and are preparing to face three tough challengers to close it out with New Orleans, L.A. Clippers and Denver all due in Milwaukee.

Milwaukee continued to persevere without Jrue Holiday, who missed his ninth consecutive game due to health and safety protocols but they took control during a prolific first half during scoring 79 points and shooting 62.5 per cent overall and hit 10-of-18 from long range. 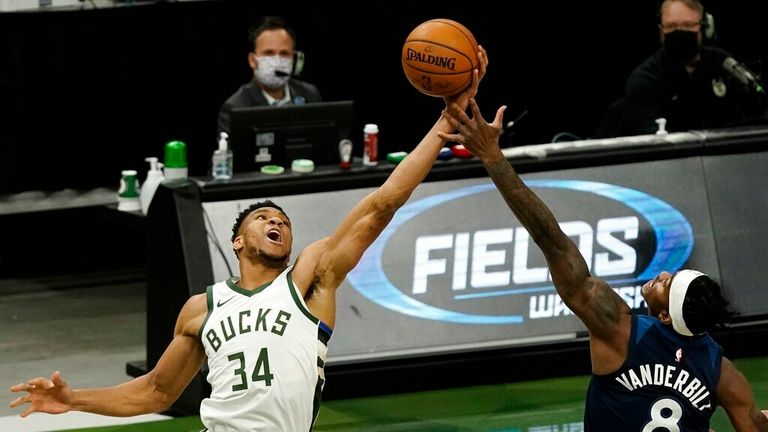 Highlights of the Minnesota Timberwolves' visit to the Milwaukee Bucks in Week 10 of the NBA.

Towns also had 11 assists and eight rebounds. Jaylen Nowell had 13 points and Ricky Rubio finished with 12.

The Wolves continued to struggle though without D'Angelo Russell, who missed his eighth game in a row after undergoing arthroscopic surgery to remove a loose body in his left knee.

Bryn Forbes came off the bench for Milwaukee and scored 23 points, including 5-of-9 shooting from three-point range, while Khris Middleton and Brook Lopez each finished with 15 points. Middleton also had seven rebounds and four assists.

Tobias Harris had 12 of his 23 points in the fourth quarter as the visiting Philadelphia 76ers held on to defeat the Toronto Raptors 109-102 in Tampa. 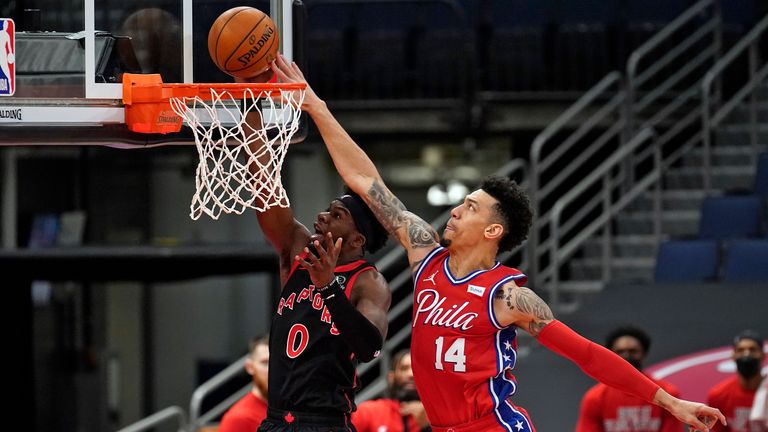 Highlights of the Philadelphia 76ers' clash with the Toronto Raptors in Week 9 of the NBA.

Philadelphia's Joel Embiid added 18 points and 12 rebounds to end a streak of 14 straight games in which he had scored at least 25 points.

Furkan Korkmaz scored 16 of his season-best 19 points in the first quarter for the 76ers, who ended a string of 16 straight regular-season road losses to Toronto.

Ben Simmons added 15 points and Shake Milton and Danny Green each scored 11 while Norman Powell had 24 points for the Raptors. Pascal Siakam added 22, Fred VanVleet had 12 points, Aron Baynes had 11 and Chris Boucher and OG Anunoby each scored 10 points.

The 76ers, who led by as many as 21 points in the second quarter, took a 14-point lead into the fourth quarter which they extended to 16 with Simmons' jumper.

Toronto trimmed the lead to six on Boucher's three-pointer with 5:07 left and fought back again after the 76ers had opened up a 15-point lead with 1:41 remaining

Siakam's dunk with 21.6 to play drew the Raptors within six but they got no closer as Philadelphia stopped the Raptors' winning streak at four games.

Nikola Jokic scored 41 points, Jamal Murray had 19 of his 24 points in the fourth quarter, and the host Denver Nuggets beat the Portland Trail Blazers 111-106. 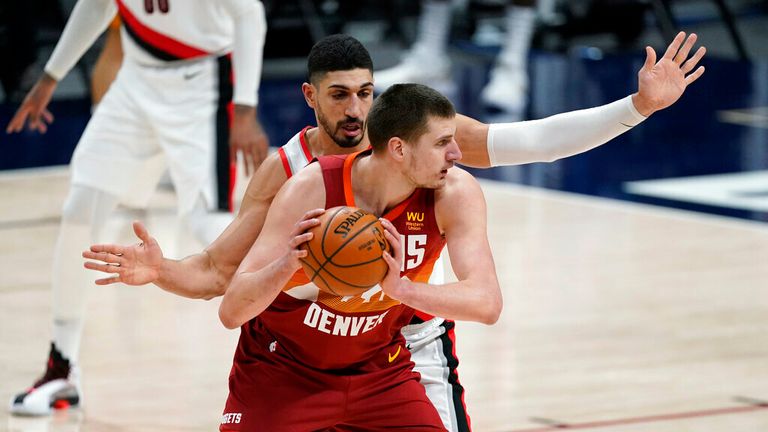 Portland led most of the third quarter but Jokic did his best to keep the Nuggets close. Down six he hit a jumper and a three-pointer, and after Jones completed a three-point play Monte Morris tied it with another three-pointer.

Lillard's 27-footer put the Blazers ahead 78-73 but Jokic hit short jumper in the lane and Nnaji drained a corner three-pointer to tie it heading into the fourth.

Murray, who seemed bothered by a sore shoulder in the second half, missed seven of his eight shots through the first 36 minutes but started to find his stroke in the fourth, his three-pointer from the wing tied it at 83 and he hit another from just inside the line to give Denver an 87-85 lead, their first since late in the first half.

Lillard and Murray began trading points; Murray hitting two more three-pointers while Lillard had a dunk, a three-pointer and two free throws as the Nuggets grabbed a 95-92 lead with 4:42 left.

After Anthony missed at the other end Jokic found a cutting Murray for a layup and a five-point lead before Lillard missed a 29-footer allowing Jokic to find Murray for a twisting jumper in the lane and a 99-92 lead which the Nuggets closed out. 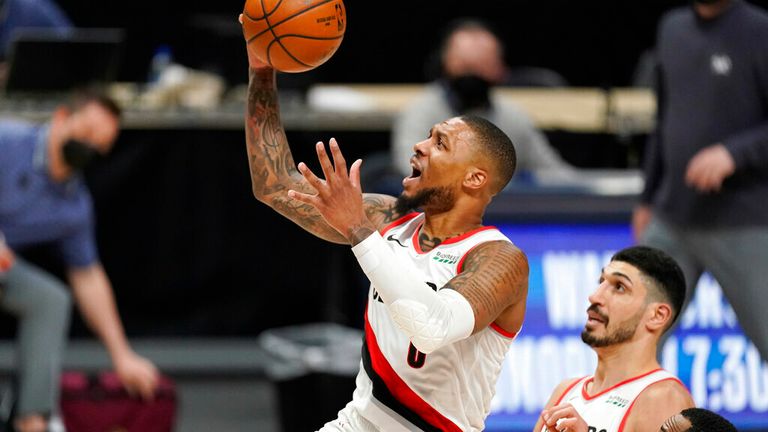 Highlights of the Portland Trail Blazers' visit to the Denver Nuggets in Week 10 of the NBA.

Michael Porter Jr. had 12 points and 10 rebounds and Zeke Nnaji scored 10 for Denver.

Damian Lillard had 25 points and 13 assists, Enes Kanter finished with 16 points and 14 rebounds, Carmelo Anthony had 24 points and Gary Trent Jr. and Derrick Jones Jr. scored 18 each for the Trail Blazers.