NBA Trade Deadline: Everything you need to know

The Orlando Magic blow it up; Victor Oladipo gets his move; Kyle Lowry surprisingly stays in Toronto - all the movers and shakers from across the league during a hectic trade deadline, even by NBA standards

A record 45 players were moved before Thursday's trade deadline as teams either swung for the title fences or consolidated for the future. Here's a cheat sheet of every major trade, and even most of the minor ones too.

The Magic 'blow it up'

The busiest franchise by far on NBA trade deadline day was the Orlando Magic, who gained five draft picks after shopping their roster's core of Aaron Gordon, Nikola Vucevic and Evan Fournier. 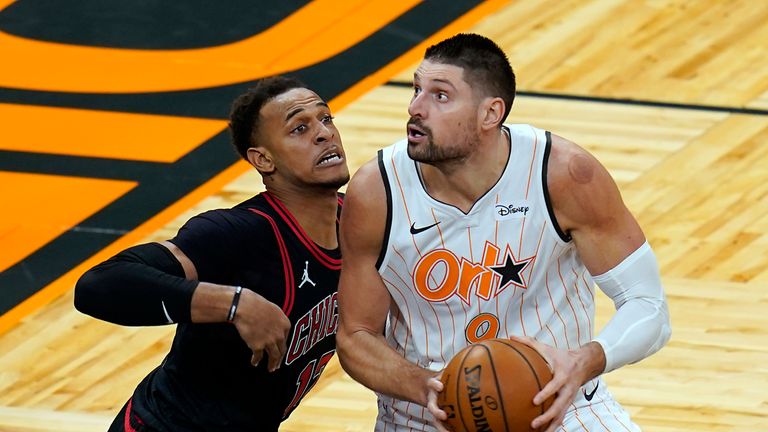 That's three-fifths of their starting line-up, combining to average 58.8 points for the season - more than half of the Magic's average of 104.5 points per game.

Gordon was sent to Denver for a package consisting of Gary Harris, RJ Hampton and a first-round pick. Fournier went to the Celtics for two second-rounders and Jeff Teague (who has since been waived and is expecting to sign as a free agent with the Miami Heat). Vucevic and forward Al-Farouq Aminu moved to the Windy City in exchange for Wendell Carter Jr, Otto Porter and two first-round draft picks in the blockbuster deal of the deadline.

The Magic's roster heading into the rest of the season pic.twitter.com/PbxpgYov4b

That wasn't enough for Chicago either, who added Celtics big Daniel Theis with Mo Wagner going the other way to Boston - who sneakily moved back under the salary cap with this deal.

Oladipo gets his move...

To Miami of all places, the lucky so-and-so. The Rockets get Avery Bradley and Kelly Olynyk in the deal, which includes a draft swap, per The Athletic.

Oladipo played in just 20 games for the Rockets after getting dealt to Houston in the mega-deal that sent James Harden to Brooklyn in January.

Oladipo was averaging 21.2 points per game to go with 5.0 assists and 4.8 rebounds with Houston but turned down a two-year, $45.2m extension with the Rockets. 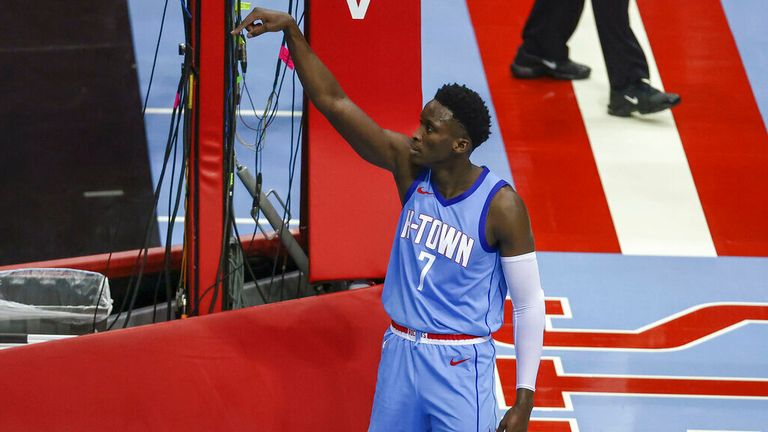 In his place they get Bradley, a two-time NBA All-Defensive Team selection and NBA champion last season with the Los Angeles Lakers plus stretch forward Olynyk, 29, who is set to become a free agent after the season. 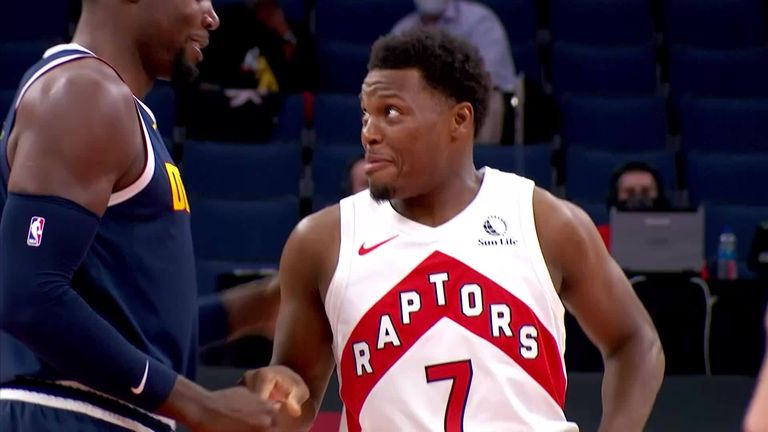 In the end, Kyle Lowry - the biggest name going into Thursday's trade deadline - stayed put, despite fervent interest from the Philadelphia 76ers, Los Angeles Lakers and the aforementioned Heat.

KYLE LOWRY IS STAYING WITH THE TORONTO RAPTORS per Woj. pic.twitter.com/AC7xfD9RqO

The Sixers dropped out of the running after acquiring veteran point guard George Hill in a three-team deal that also saw Ignas 'Iggy' Brazdeikis join the Sixers, Terrance Ferguson join the Knicks and Austin Rivers and Tony Bradley join the Thunder.

Oklahoma's master hoarder of picks Sam Presti nabbed two more in the deal, too, securing Philly's second-round picks in the 2025 and 2026 drafts.

That left just the Heat and Lakers battling it out for Lowry, but neither were willing to put their promising young guard on the table for the 36-year-old.

For the Lakers the sticking point was Talen Horton-Tucker, for the Heat Tyler Herro and ultimately no deal was done, with Lowry staying in Toronto at least until the end of the season when he becomes a free agent.

On a similar note, there was also confirmation that Lonzo Ball was sticking with the New Orleans Pelicans until his restricted free agency in the summer.

With just half an hour of the deadline remaining the Los Angeles Clippers got in on the action, securing some much-needed playmaking from the point guard position with the veteran Rajon Rondo, an NBA champion with the Lakers in 2019/20. 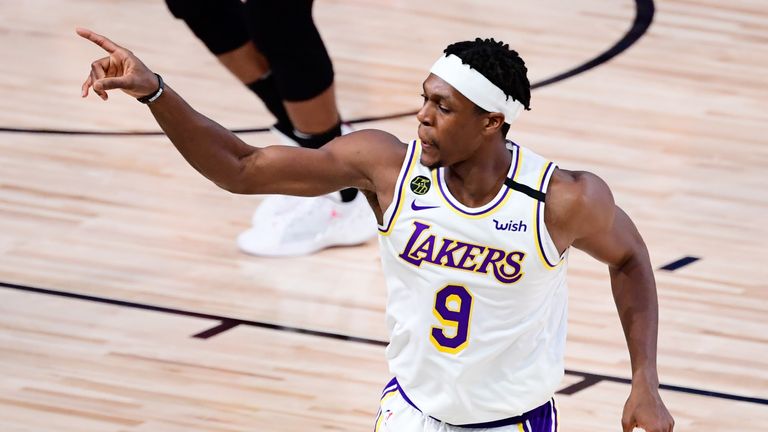 Lou Williams, a three-time Sixth Man of the Year, was sent to the Atlanta Hawks along with two second-round picks.

Williams has strong ties to the city after representing the Hawks for two seasons between 2012 and 2014, as well as attending South Gwinnett High School and playing college basketball for the University of Georgia.

The Toronto Raptors, perhaps at this point certain they were losing Lowry, also sent Norman Powell to the Portland Trail Blazers in exchange for shooting guards Gary Trent Jr and Rodney Hood.

Powell, 27, emerged as a force for the Raptors this season, averaging 19.6 points over 42 games whilst shooting a staggering 44 per cent from three - as if Portland needed any more backcourt firepower alongside Damian Lillard and CJ McCollum.

Rip City!! 🌹 Appreciate all the love and support you gave me over the last 3 years, I will never forget how loud the MODA center was 🗣 @trailblazers - Thank you to every coach, teammate, & the front office 🖤💯 Thank you for giving me the opportunity of a lifetime. GT OUT 🤟🏽 pic.twitter.com/fbbTpLKHda

In return, the Blazers are giving up their third-leading scorer in Trent, who is averaging 15.0 points over 41 games.

A career 41.5 per cent three-point shooter, Redick is in the final year of his contract and is one of the most consistent shooters in NBA history. However, he has struggled with his three-point shot this season (36.4 per cent) and is averaging 8.7 ppg - his lowest mark since 2008-09.

First up is the news that Javale McGee is returning to Denver, the team he played for between 2012-2015.

The Nuggets gave up Isaiah Hartenstein and two future protected second-round picks for the return of their wayward son, who will provide valuable minutes as a rim-protecting, lob-catching back-up center behind Nikola Jokic.

In news that will surprise nobody, Andre Drummond, the best rebounder in the NBA who hasn't played since February 12, is finally being bought out by the Cleveland Cavaliers. Or is he?

While no trade suitors were found for Drummond, it seemed all but certain a buy-out was the only remaining option, with 'The Big Penguin' then likely joining the injury-riddled Lakers to clog up the paint and snatch boards like an extremely Hungry Hippo.

However, there have been no updates on that front as of yet, which makes the following news all the more impressive for its efficiency.

Aldridge bought out by Spurs

A month on from his last game, seven-time All-Star LaMarcus Aldridge has completed his buyout process with the San Antonio Spurs and will enter free agency, the team announced.

According to Adrian Wojnarowski of ESPN, the Miami Heat are the 'frontrunner' to land Aldridge.

Not enough for you? Ok, fine, sure. Here's the rest.

The Golden State Warriors made a pair of trades, sending Brad Wanamaker to the Charlotte Hornets and forward Marquese Chriss to the San Antonio Spurs.

The Toronto Raptors dealt reserve guard Terence Davis to the Sacramento Kings and backup guard Matt Thomas to the Utah Jazz for a second-round pick each.

And the Heat also added Nemanja Bjelica from the Kings, who got forwards Moe Harkless and Chris Silva in return.