Chris Paul: Phoenix Suns swap good looks for great ones as part of our team philosophy 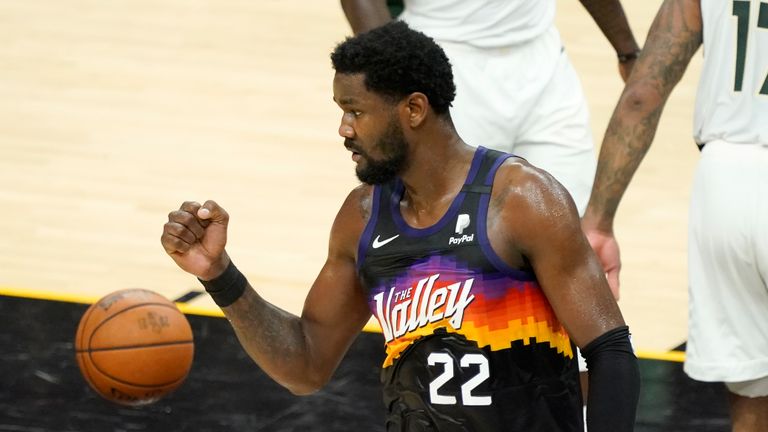 It's one of the staples of good basketball offense, keep the ball moving to create the best possible shot for your team.

It's also something which is often preached but not always practised.

But with Monty Williams' Phoenix Suns team, who now lead 2-0 in the NBA Finals after beating the Milwaukee Bucks 118-108, that is not the case.

One play in particular, at the end of the second quarter, demonstrated exactly how this team makes sure it finds the best possible look on most trips down the floor.

The ball went from Chris Paul to Devin Booker and did not stop moving until Deandre Ayton scored after every Suns player had touched it. The 10-pass sequence was the prettiest play of the NBA Finals.

Paul, who is often the primary architect in their enchanting offense, said: "We have a saying with our team, it's called 'good-to-great'. You know, we pass up good shots to get great shots and it's the unselfishness of our team.

"Any coach in America, I'm sure they would love to show a team that clip and, you know, [DeAndre Ayton] finishes it at the end."

Devin Booker led the scoring with 31 points said it's the "most pumped he's been after the playoffs". It's very easy to forget this is his very first postseason run, and it might very well end up with a first title for the Suns franchise.

They have never been closer. The Suns never even had a lead in the NBA Finals until their 118-105 victory in Game 1. They dropped the first two games in both 1976 and 1993, their only other appearances, and did not win more than two games in either series. They have already got two this time and will go after a third Sunday in Milwaukee, which will host the NBA Finals for the first time since 1974.

Paul, who had 23 points on the night and passed Kobe Bryant to move into 10th overall in career playoff assists in NBA history with the final of his eight assists (1,041 overall achieved in 125 games) on the evening, is loving the chemistry he is building up with the Suns' young superstar.

With his final assist of Game 2, Chris Paul passed Kobe Bryant to move up to 10th overall in career playoff assists in #NBA history.

Scottie Pippen is next at 1,048. pic.twitter.com/oZVjAclMnR

Paul said: "He just stays in attack mode all game long. And that's what I love about him. I think me and him together, we've just built so much trust.

"Whatever happens during the game, you just know that there's never any malicious intent, he just wants to win. He going to do whatever he has to do to help our team win and it's nice.

"He could tell you better than I can, but he and trained and worked his whole life for these moments. You know, our team all season long has been you know, 'you put the work in, you live with the results'. So, if Book shoots it, I expect it to go in. I get mad at him when he doesn't shoot."

Unlike Booker, Paul has seen just about everything that the NBA can throw at you. Up until this year, that was everything except an NBA Finals. He was set to go down in history as perhaps the greatest player never to play on the biggest stage of all.

But his legacy is on the verge of looking very different now. He's completely unfazed by the enormity of it though, and recognises it is his duty to stay level-headed and guide his younger team-mates through these challenges.

"I do a pretty good job of staying in the moment," Paul said. "Maybe a lot of the guys on our team, that's their first playoff series. You know, they don't know that heartache or heartbreak, they're just out there playing. So for me, I know how quick things can change. I know how a possession or play can change the dynamics of an entire series.

"I don't get too high, I don't get too low. I just stay, even keel. I wasn't always like that but I know that these situations don't happen every day."

But is he surprised this Phoenix Suns team has been able to come so far, in such a small space of time – so much so they are now halfway towards hoisting the Larry O'Brien trophy aloft for the first time in team history, with two games already won?

Plenty of other people have been surprised by the team up to this point with every step they have taken, but the chances of them making the biggest leap of all appear to becoming less and less surprising with each game that passes.