Coverage of the NBA Finals continues on Saturday night as the series heads back to Phoenix all square at 2-2. Watch Devin Booker and the Suns host Giannis Antetokounmpo and the Milwaukee Bucks in a critical Game 5 encounter live on Sky Sports Arena from 01:45am Khris Middleton and Devin Booker both had 40-point games but it was the Milwaukee Bucks who rallied late in the fourth quarter, thanks in part to a miraculous Giannis Antetokounmpo block, to take Game 4 109-103 and tie the series at 2-2.

Middleton scored 10 consecutive points in the final period and 40 overall for a new playoff career-high as the Bucks evened the NBA Finals with the Phoenix Suns on Wednesday night.

He converted four free throws after making a challenged lefty layup and two jumpers to carry the Bucks over the line and turn the remaining games into a best-of-three for the championship.

Milwaukee overcame 42 points from Devin Booker in what was a bounce-back performance for the Suns shooting guard following his miserable Game 3 display. Indeed, as the Bucks tried three different defenders in front of him, Booker scored 18 in the third quarter and made all seven of his shot attempts. But foul trouble would come to haunt Booker late on. 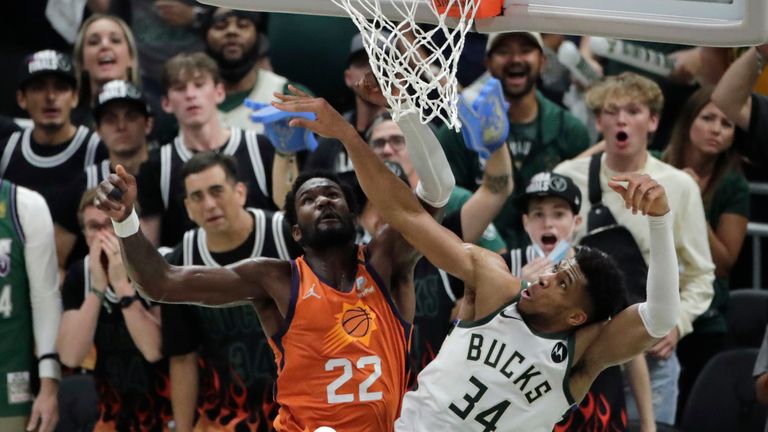 Tied at 99, Middleton put the Bucks up by two with a smooth jumper from the left elbow and Giannis Antetokounmpo blocked Deandre Ayton on a lob at the other end with an incredible defensive play, swinging the momentum firmly in favour of the home team.

Clutch play after clutch play helped the Bucks flip a nine-point deficit in the fourth quarter into a six-point victory.

Booker reached 40 points to tie the game at 97, answering Connaughton's corner three at the other end.

Antetokounmpo had 26 points and 14 rebounds for the Bucks, along with nine assists. On something of an off night, Chris Paul had 10 points, seven assists and five turnovers. Ayton, meanwhile, had six points and a game-high 17 rebounds for Phoenix.

A trailing Antetokounmpo secured Jrue Holiday's miss, on which Booker appeared to make enough contact to be called for his sixth personal foul, and dropped in an easy two that made it 95-94 with 3:30 remaining.

Booker went to the bench when he was whistled for his fifth foul on an aggressive boxout of PJ Tucker with 10:47 left in the game and returned at the 5:55 mark. This proved a decisive stretch in the game.

As the Bucks tried three different defenders in front of him, Booker scored 18 in the third quarter and made all seven of his shot attempts. Ragged execution and stagnant offense - one field goal in their first 10 second-half attempts - threatened to erase Milwaukee from the picture in the third. But Phoenix turnovers kept the game within reach for the Bucks, even as the Suns surged on a 9-3 run to end the period.

Booker had a game-high 20 points in the first half on 8-of-15 shooting, and Middleton led Milwaukee with 16. The game was tied at 52-all.

In the end though, it was Middleton who went off down the stretch as well as he, Antetokoumpo and the Bucks prevailed to tie the series 2-2 and it's now back to Phoenix for a vital Game 5 on Saturday night, which you can watch on Sky Sports Arena from 1:45am.