Mavericks @ Warriors: Can Luka Doncic and Dallas respond from behind once again? 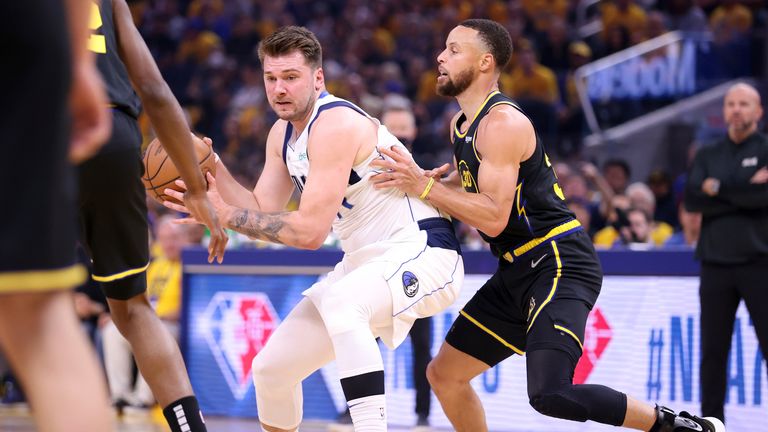 Luka Doncic was shackled by the Golden State Warriors in Game 1 but the young superstar has shown the ability to respond when questions are asked of him.

The Slovenian, who is the focal point of the Dallas Mavericks offense, has been magnificent in this season's NBA Playoffs. Of players still involved at this stage, he ranks first in points and rebounds and second in assists and steals.

He is third overall in points average, behind only MVP Nikola Jokic and reigning Finals MVP Giannis Antetokounmpo. He would have ranked top in that category as well, prior to Game 1 against the Warriors, where he was held to just 20 points, bringing down his average.

So far in the postseason, though, when a team has managed to find somewhat of an answer for his scoring and playmaking prowess, Doncic has shown the ability to lift himself and his team once again. Whether he can do so again in Game 2, we will find out live on Sky Sports Arena & Main Event, from 1am overnight on Friday.

The Warriors employed a box-and-one defensive scheme and it worked as the Mavs failed to knock down shots and Doncic's ability to attack down the lane was thwarted.

Andrew Wiggins was the chief pest, picking Doncic up from wherever on the court he received possession. That allowed Draymond Green to act as an anchor for the rest of the defense and, according to his intimations in the pre-game press conference, Warriors head coach Steve Kerr plans to run it back once again.

Kerr described what he saw defensively as "excellent" from Wiggins and the teammates who chipped in.

For years, Wiggins was pilloried as being "overrated" and "overpaid" while toiling in Minnesota. Truth be told though, it was just that being a number one or number two option on offense didn't suit him.

For the Warriors, he is able to slot in as a role player with a flexible offensive skillset and he has bought into the team's identity on the defensive side of the ball with great aplomb.

"I'm locked in," Wiggins said. "I'm motivated, and when you see it work or I feel like it's helping us play better, it just motivates me to do it more. I'm not tired or nothing. You know, it's adrenaline. I just feel good."

Kerr said it's natural for him and his staff "to have those discussions" about making adjustments after a very successful win when the weight of adjustments fall on the other team. But it helps to have Green around should any emergency or breakdown arise.

"Draymond sets the tone for us, and has for a long time," Kerr said. "It starts with him." As for the Mavericks, Jason Kidd has been here before in his first season as coach of the Mavericks, having gone down 1-0 in a third consecutive NBA playoff series.

The Bay Area native is looking for another bounce-back from Luka Doncic and company in his first trip to the conference finals as a coach, which just happened to start in San Francisco.

Kidd is guiding the franchise that was his first home away from home nearly 30 years ago, and is this deep in the postseason for the first time since Kidd was the point guard on the Dirk Nowitzki-led team that won the 2011 title.

"There's a team out there that's won a championship starting the same way, losing the first game," Kidd said after Wednesday's 112-87 loss to Golden State in Game 1 of the Western Conference Finals. Kidd has remained fairly guarded when it comes to the conversations on championships since replacing his coach from that 2011 title year, Rick Carlisle. In this case, he could have been referring to those Mavs, who beat Miami in six games after losing the opener.

With a steady hand as the coach, Kidd has helped Dallas rally from a 16-18 start to finish in the top four in the West for the first time since 2011.

The Mavericks started the playoffs without Doncic following Kidd's questionable decision to keep him in a regular-season finale that had clearly become meaningless before the young superstar strained his left calf.

Kidd rejected the idea that he should have pulled Doncic, then the Mavericks won their second game without their All-Star against Utah and did it again when the first-round series moved to Salt Lake City. Dallas eliminated the Jazz in six games, with Doncic returning for the final three.

After losing the first two games at top-seeded Phoenix, neither of which was particularly close, Dallas won four of the last five, capped by a seismic 33-point Game 7 victory. It was the only victory for the road team in the series. "Coach did a good job of getting everybody to buy in," Dorian Finney-Smith said. "He's the only person in the locker room who's been in this situation. He's always got a cool, calm, collected attitude, and I think we take that from him."

Kidd has acknowledged learning lessons from taking a hard-charging approach to his second job as a head coach in Milwaukee, where he was fired in the middle of his fourth season after the Bucks gave up draft picks to get him from Brooklyn.

There was an unflattering anecdote in a book about Giannis Antetokounmpo released shortly after the Bucks won the title last year, describing a gruelling practice on Christmas Eve when Kidd was upset over a loss.

Dallas guard Sterling Brown, who played for Kidd in Milwaukee, has suggested his current teammates are seeing a different version of Kidd. What matters most, of course, is his relationship with Doncic - which appears to be all good so far.

"I think we're a way better team now," Doncic said during the season. "He's been great for us. He communicates with the players. He's just been great, helping not just me but everybody, just to see a better picture."

The picture has developed into the best one in a decade for a franchise still led by a European star. Doncic, from Slovenia, is a year ahead of Nowitzki (Germany) in getting to the conference finals - both in age (23 vs 24) and seasons (four vs five).

Kidd, drafted second overall by Dallas in 1994 before getting traded two-and-a-half years later and returning to win his only title, reached the NBA Finals with each of the three teams he went this far with during a Hall of Fame playing career.

To do it again, his team will have to beat coach Steve Kerr and Warriors superstar Stephen Curry, both of whom faced Kidd on the court.

"The way he conducted his teams from that point guard spot, coaching seemed like a perfect fit," said Kerr, whose final season as a player was with San Antonio when the Spurs beat Kidd and the Nets in the 2003 NBA Finals. "But you never know; a lot of superstars don't go into coaching. I'm glad he went down this path. He's done an amazing job with Dallas." Curry's overlap with Kidd was four years, capped by Kidd's final season as a player with the New York Knicks in 2012-13.

"My favourite memory of him is all the reactions and mannerisms he had when he was on the bench in New York and I was going off," Curry said.

Kidd wasted no time getting into coaching, joining Brooklyn immediately upon retiring and leading the Nets to the second round in 2014. He couldn't repeat that with the Bucks, losing in the first round twice.

His Mavericks will have to dig out of another hole to do it. Join us live on Friday night to see if they can start the fightback in Game 2 and steal one on the road.

Bottom line: The Golden State Warriors host the Dallas Mavericks in the Western Conference finals with a 1-0 lead in the series. The Warriors won the last matchup 112-87 on May 19 led by 21 points from Stephen Curry, while Luka Doncic scored 20 points for the Mavericks.

The Warriors are 33-19 against Western Conference opponents. Golden State ranks fifth in the NBA with 27.1 assists per game. Curry leads the Warriors averaging 6.3.

Top performers: Curry averages 4.5 made 3-pointers per game for the Warriors, scoring 25.5 points while shooting 38.0 per cent from beyond the arc. Klay Thompson is averaging 20.4 points over the last 10 games for Golden State. 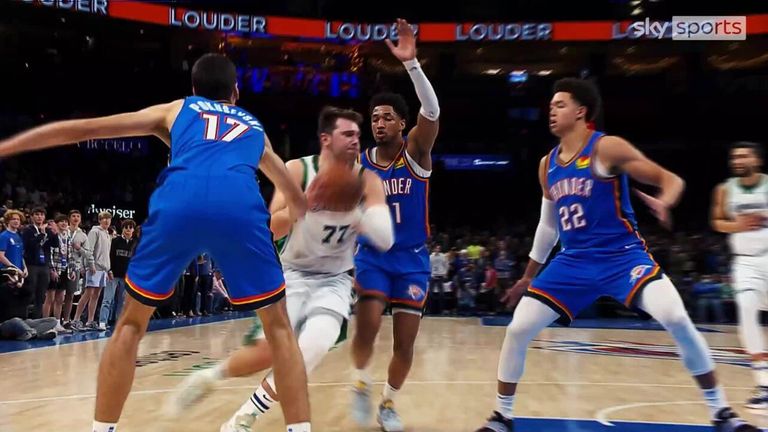 Two of the most show-stopping players in the game, Stephen Curry and Luka Doncic know how to add flair to proceedings!

Doncic is averaging 28.4 points, 9.1 rebounds and 8.7 assists for the Mavericks. Jalen Brunson is averaging 19.3 points over the last 10 games for Dallas.

Injuries: The Warriors have Gary Payton II out with the elbow fractured in controversial circumstances against the Memphis Grizzlies. Andre Iguodala is out with a neck injury and James Wiseman is out for the season (knee).

The Mavericks are without Tim Hardaway Jr. who has a foot injury.

The rush of live NBA Playoffs games continues on Sky Sports this weekend - see the list of games here and subscribe to watch the live action.