With the 2019-20 NBA season on hold for the foreseeable future, it is an opportune moment to explore a selection of the NBA's most iconic numbers.

In the latest feature in our series, we take a look at a pair of iconic NBA players who wore No 3.

A famous quote from American author Mark Twain reads: "It's not the size of the dog in the fight, it's the size of the fight in the dog." Of all NBA players, those words never rang truer than for Allen Iverson.

Listed at 6ft and 165lbs, Iverson is one of the smallest players to ever win MVP honours, 'The Answer' ended his 14-year pro career as an 11-time All-Star and a four-time NBA scoring champion. He was selected for the All-NBA team seven times, including three first-team selections. 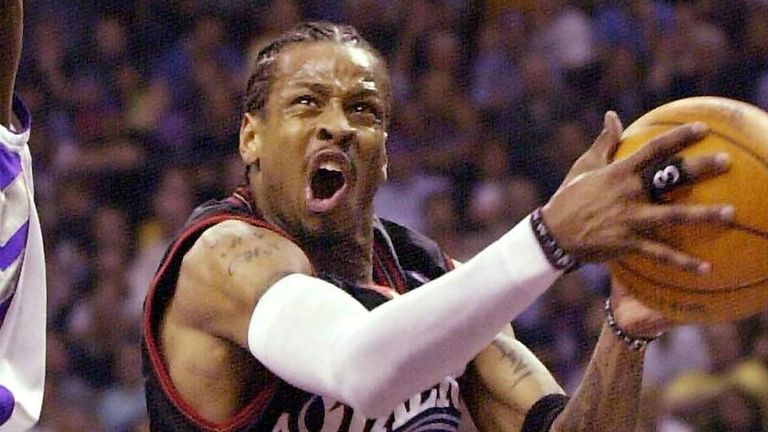 As those four scoring titles suggest, Iverson was a prolific and creative offensive player. He averaged over 30 points a game in three separate seasons and ended his career with 24,368 points, good for 25th place on the NBA's all-time scoring list.

The 2000-01 season was the highlights of Iverson's career. He led the NBA in points (31.1) and steals (2.5) per game en route to winning the sole Most Valuable Player award of his career.

"I had no space for error. But I never stopped and worked on all the things people said I couldn't do and now I'm the MVP of the league. It's something I always wanted," Iverson said after receiving the award.

That season Iverson carried the Philadelphia 76ers through the Eastern Conference playoffs and into an NBA Finals match-up against the Los Angeles Lakers. 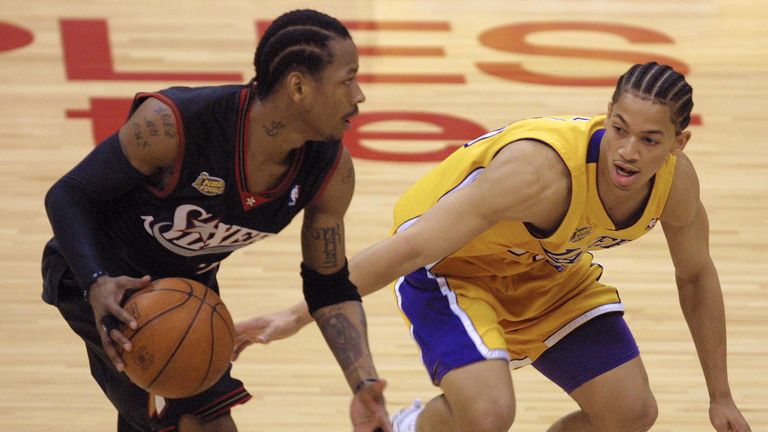 A 48-point masterpiece - featuring him famously stepping over fallen Lakers defender Tyronn Lue after making a clutch shot - earned the Sixers a shock overtime win in Game 1 of the series before Kobe Bryant and Shaquille O'Neal took charge to win in five games.

Sky Sports NBA analyst Mike Tuck recalls Iverson's importance to the NBA and influence on young basketball fans and players: "AI came into the NBA at a time my friends and I were into the And 1 scene. Crossing people over, dunking on people, Iverson - along with Vince Carter and Tracy McGrady - embodied all of that.

"Iverson was tenacious. His offensive skills separated him from everyone else. When he first came into the league, they changed the rules to call his crossover a carrying violation - because of the volume of defenders he was blowing by every night.

"He was a great defender as well, getting it done on both ends of the floor. As a scoring point guard (28.1 points per game for the 2000s - which is insane for a guy who was barely 6ft tall), he was still able to keep his team-mates involved to a degree, putting up 6.2 assists per game for the decade. 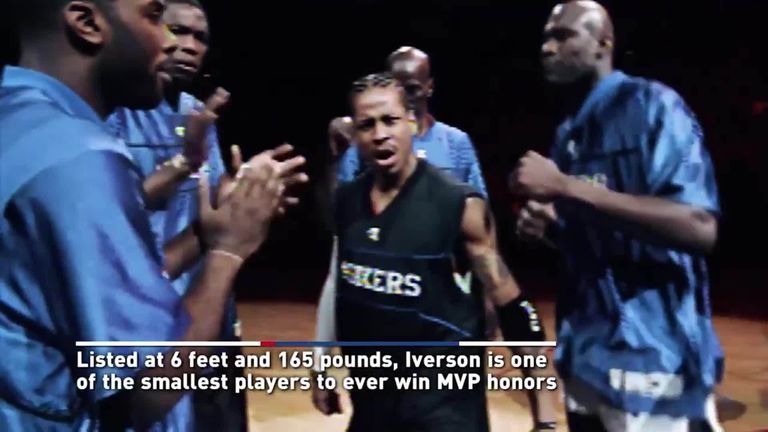 "He came in and just dominated the league. Toronto fans, when the Raptors met the 76ers in the 2001 Conference semi-finals, we absolutely hated him! He carried that Sixers team all the way to the NBA Finals with a broken down Dikembe Mutumbo, Theo Ratliff, Eric Snow, Aaron McKie. He put a team of role players on his back and took them to the Finals.

"I think Iverson would have been a frustrating guy to play with, not only because of his usage rate but his attitude. He had so much going on off the court it would have been a major distraction. Even with that stuff going on, he was still amazing. I always wonder how much better he would have achieved if he had been able to devote more time and focus to basketball. He probably would have won a championship.

"That 76ers team had no choice but to base everything around him. Imagine if you could have paired Iverson with a Scottie Pippen how far they could have gone together."

In February 2020, the Miami Heat held a three-day celebration to mark Dwyane Wade's retirement from the NBA. If you think that sounds a tad excessive, consider Wade's achievements over his 16-year career. You'll probably revise your option. 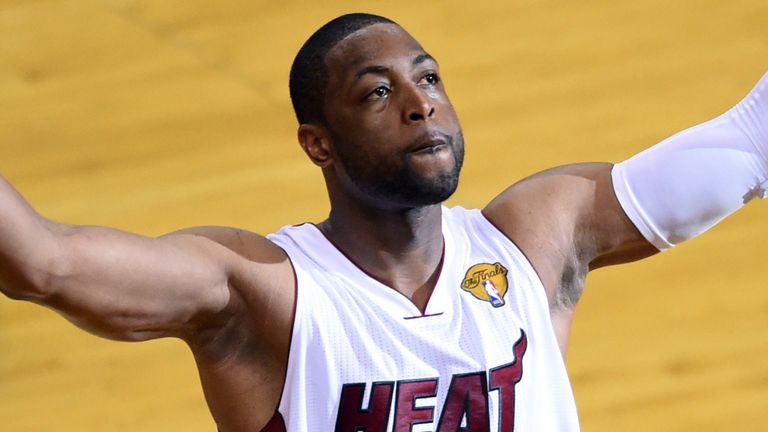 Wade ended his career as a three-time NBA champion and a 13-time All-Star with eight-time All-NBA selections. He was the 2009 scoring champion (30.2 points per game) and was the 2010 All-Star Game MVP.

His performances in the 2006 NBA Finals, in which he led the Heat to their maiden championship with a come-from-behind series win over the Dallas Mavericks, ranks as his best. In fact in 2011, then-ESPN writer John Hollinger ranked it as the greatest individual performance in NBA Finals history. 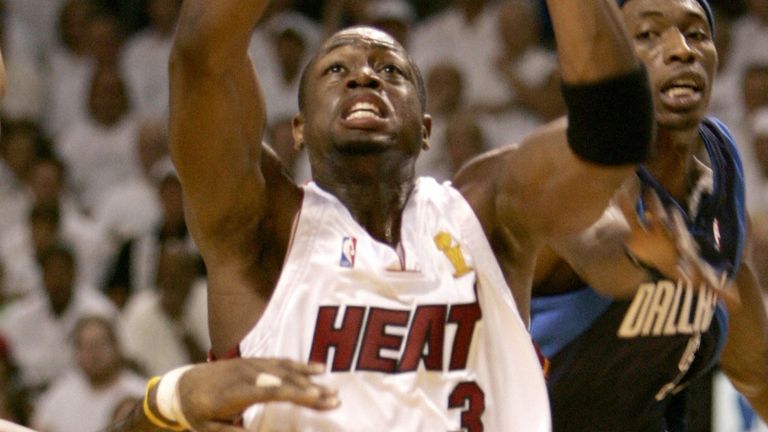 In a series in which neither team cleared the 100-point mark in regulation in any of the six games), Wade averaged 34.7 points, 7.8 rebounds, 3.8 assists and 2.7 steals, inspiring the Heat to climb out of a 2-0 hole and win the series 4-2. Wade was the runaway winner of the Finals MVP award.

For the next four seasons, Wade thrilled NBA fans with his scoring feats, circus shots, game-winners and astonishing dunks - a November 2009 slam on Cleveland Cavaliers center Anderson Varejao, in particular, stands out.

Once the Heat acquired LeBron James and Chris Bosh to form a 'big three' with Wade in the summer of 2010, it was a given the team would vault back into the title picture. Although James' initial promise of "not one, not two, not three, not four" championships wasn't fully realised, the Heat reached four straight NBA Finals, winning two (2012 and 2013).

With James in his prime, Wade - now in his 30s - did not have to shoulder as much of the Heat's scoring burden but he still made his presence felt. In Game 6 of the 2013 Eastern Conference Finals, a 10-of-13 second-half performance inspired the Heat to a series-levelling win over the Indiana Pacers. 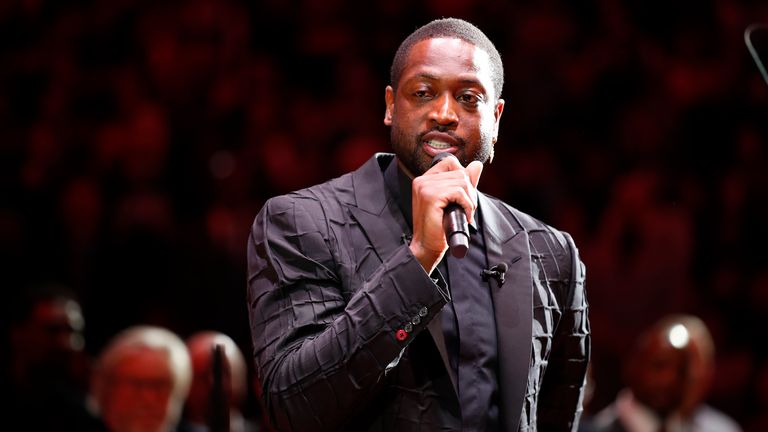 He repeated the trick in Game 4 of the Finals against the San Antonio Spurs, pouring in 32 points to level the series at 2-2. Miami would eventually prevail in seven games, with Wade earning his third title.

At 35, Wade left Miami for a season with his hometown team, the Chicago Bulls. One year later, he teamed up again with James at the Cleveland Cavaliers.

But a mid-season move allowed Wade to return to the Heat to end his career. In September 2018, he announced the 2018-19 season would be his last, embarking on a season-long goodbye featuring jersey swaps with players from all around the league. 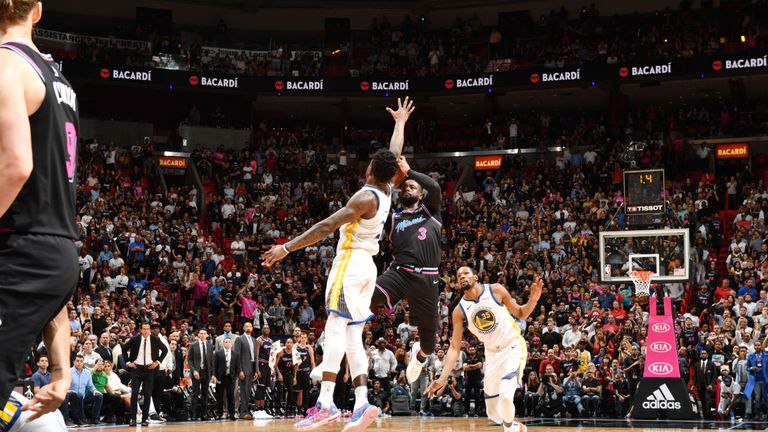 The old magic was still there, too. Wade banked in a spectacular three-pointer at the buzzer to earn the Heat a memorable win over the Golden State Warriors.

Rolling back the years, he celebrated on by climbing onto the scorer's table and beating his chest as 'Wade County' erupted with joy.