NFL Week 15 on Sky Sports: Texans at Titans and Rams at Cowboys as playoff race hots up

Watch every game on Sky Sports Action (407); coverage begins at 5.30pm on Sunday while NFL RedZone is on Sky Sports Mix (145) from 6pm

Your NFL Week 15 fixtures have arrived!

As we do every week, Sky Sports will show every Thursday night, Sunday night and Monday night game live, alongside two Sunday evening games - all on Sky Sports Action.

The games we are showing this week are...

Thursday night will stage the New York Jets (5-8) at the Baltimore Ravens (11-2), the latter of whom's Week 14 win over the Bills saw them become the first team in the AFC to clinch a playoff berth this season. While Lamar Jackson and his teammates can rest knowing their post-season place is confirmed, they will no doubt be eager to secure the No1 seed and a first-round bye.

At 6pm on Sunday, the Houston Texans (8-5) will visit the Tennessee Titans (8-5) to battle it out for pole position in the AFC South. The teams enter the matchup with identical records, with the Texans seeking a response to their 38-24 loss to the Denver Broncos (5-8) and the Titans coming off the back of a 42-21 win over the Oakland Raiders (6-7).

Next up the Los Angeles Rams (8-5) will be looking for their third successive win when they visit the Dallas Cowboys (6-7) in the 9.25pm kickoff. Sean McVay's side boosted their playoff hopes in Week 14 with an impressive 28-12 win over the Seattle Seahawks (10-3) while the Cowboys slipped to their third defeat in a row, losing 31-24 to the Chicago Bears (7-6). 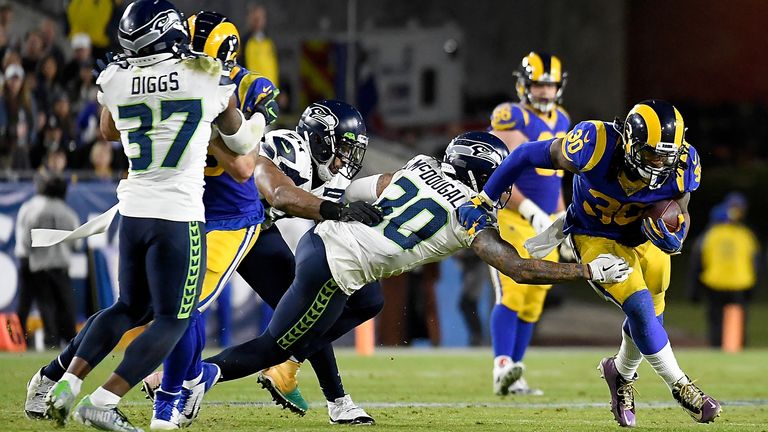 Then at 9.25pm, the Buffalo Bills (9-4) are on the road against the Pittsburgh Steelers (8-5) to see if they can take another stride towards a playoff spot and potentially put more pressure on the New England Patriots (10-3) at the top of the AFC East. For the Steelers, it is another opportunity to strengthen their grip on a Wild Card spot, particularly with close rivals in the Texans and the Titans facing off.

Get NFL news on your phone

Want the latest NFL news, features and highlights on your phone? Find out more

Week 15 will be wrapped up by Monday Night Football when the Indianapolis Colts (6-7) meet the New Orleans Saints (10-3) at the Superdome in a 1.15am kickoff looking to snap a three-game losing streak. The Saints have already clinched the NFC South title but find themselves as the third seed in the NFC following their 48-46 defeat to the San Francisco 49ers (11-2) on Sunday.

If you are craving extra content during the week, catch NBC's Pro Football Talk, hosted by Mike Florio and Chris Simms, every Monday-Friday at 7pm on Sky Sports Action (note the show may be moved for other live sports coverage).

Also, Inside the Huddle is available both in video and audio form. Airing on Wednesday at 9pm on Sky Sports Action, Neil, coach Jeff Reinebold and guests will ensure you are up to date with all the latest news and talking points.

If you cannot catch the show live, it is available On Demand and as a podcast.

Don't worry if you missed the live action on Sunday, as our two-hour highlights show has you covered. We bring you the best of the action on Sky Sports, including all the top plays, analysis and moments from the studio.

The jam-packed show airs at 7am on Monday mornings on Sky Sports Action, and if you miss it, it is repeated at 9pm and available On Demand.