Arizona Cardinals quarterback Kyler Murray completed 24 of his 32 passes for 268 yards, with two touchdowns, adding a further 39 yards on the ground; the Los Angeles Rams' usually stingy defense was carved up to the tune of 37 points and 465 total yards Kyler Murray led the Arizona Cardinals to a convincing 37-20 road win over the Los Angeles Rams in a battle of the NFC West undefeated team at SoFi Stadium.

Arizona's victory was their first over a Rams team coached by Sean McVay, having lost their eight previous meetings. It sees the Cardinals improve to 4-0 on the season, while LA drop to 3-1 on the year.

The Cardinals carved up the Rams' usually stingy defense to the tune of 37 points and 465 total yards, 216 of those gained on the ground.

Chase Edmonds led Arizona with 120 rushing yards on 12 carries, while James Conner found the endzone twice from his 18 carries (for 50 yards).

Quarterback Murray produced another electric display at quarterback. He finished 24 of 32 for 268 passing yards, with two touchdowns, adding a further 39 yards on the ground.

As for the Rams, Matthew Stafford finished 26 of 41 for 280 passing yards, with two touchdowns and an interception, with the offense generally struggling to find the fluency that earned them three-straight wins to start the season.

The Rams actually got on the scoreboard first, with Matt Gay kicking a 42-yard field goal to see the home side score points off their opening possession.

But, after then forcing Arizona to punt, Stafford was intercepted by Bryon Murphy on their next series when trying to hit DeSean Jackson on a deep ball. Murphy later had to leave the game with a rib injury.

The Cardinals took over on their own 13-yard line and, six plays later, Murray hit Green for a superb 41-yard scoring strike to secure Arizona a 7-3 lead. 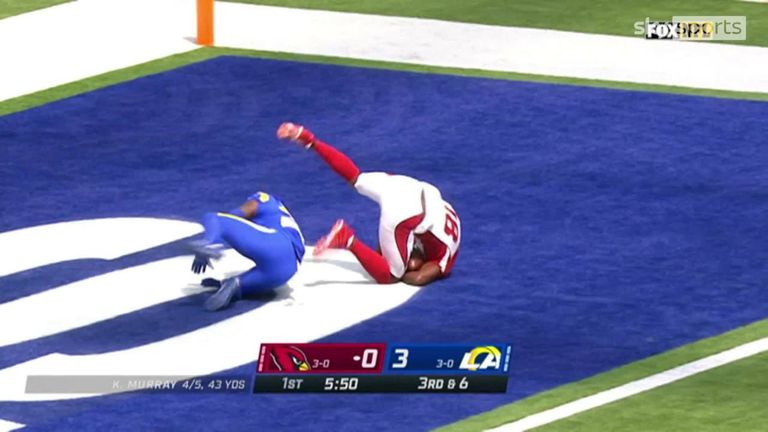 Los Angeles answered right back with a touchdown drive of their own, marching 75 yards on nine plays before Stafford hit Van Jefferson on a 14-yard touchdown toss to see the Rams reclaim the lead.

But Arizona wrestled it back for good when Murray found tight end Maxx Williams from 14 yards out. The Cardinals then stretched that lead to 21-10 - Conner rumbling in for the first of two goal-line TDs - after capitalising on a Sony Michel fumble.

The two teams traded in field goals heading into half time, before Arizona took the game away in the second half, at one point streaking 24 points clear until Stafford found Robert Woods for a consolation score late on.