Benedict Bermange picks out the best stats after Tom Brady's landmark night as he set the new NFL all-time passing yards record upon his return to New England to face the Patriots; Tampa Bay Buccaneers beat the Patriots 19-17

Tom Brady has the most Super Bowl victories (7) career wins (233) and touchdown passes (591) in NFL history. And on Sunday night, upon his return to Foxboro, Brady added another record to his list.

Here, Sky Sports cricket statistician - and big Buffalo Bills fan - Benedict Bermange looks at just what Brady has achieved and picks out some of the best stats from his remarkable career.

He duly set the new mark with a 28-yard completion to wide receiver Mike Evans, and finished with a total of 269 yards on the night.

The NFL did not start keeping official statistics until 1932, so here are the quarterbacks who have held the title for the most passing yards chronologically since that date:

Brady ended the day with 80,560 yards passing, cementing his position in top spot ahead of Brees, Peyton Manning, Brett Favre and Philip Rivers. 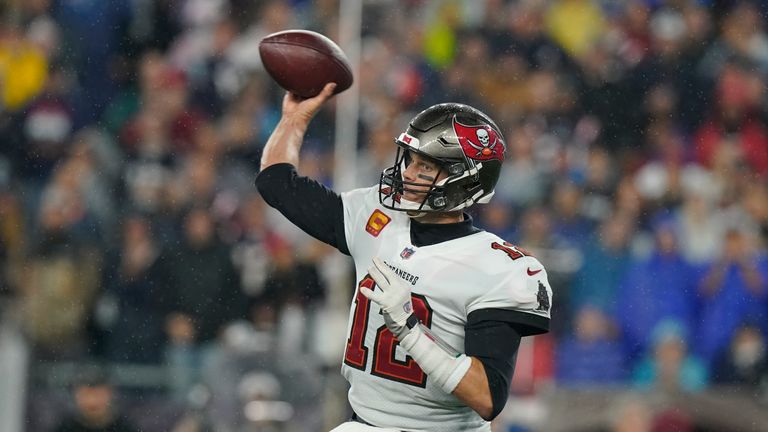 Brady also engineered the 50th game-winning drive of his career, to become the third quarterback to have at least 50 such drives.

Quarterbacks with most game-winning drives Brady's victory made him the fourth quarterback to defeat all 32 NFL franchises, joining Favre, Peyton Manning and Brees. It also made Bill Belichick the 100th different NFL head coach to lose at least one game to Brady.

However, he did miss out on one record. He needed 350 passing yards to pass Brees (35,506 career pass yards at the Superdome) for the most by any player in a single stadium in NFL history, but fell 81 yards short.

Perhaps fittingly, the final stat should probably be the fact Brady has won more Super Bowls than any other player, head coach - or even team - in history: