Cardinals send cornerback Tay Gowan and a 2022 fifth-round pick to the Eagles for the 30-year-old, a three-time Pro Bowler; so far this season, Ertz has had four receptions for 29 yards and made a touchdown during Thursday night's 28-22 loss to Tampa Bay

Philadelphia Eagles tight end Zach Ertz has been traded to the Arizona Cardinals with cornerback Tay Gowan going in the opposite direction.

So far this season, the 30-year-old has had four receptions for 29 yards and made a touchdown during Thursday night's 28-22 loss to Tampa Bay Buccaneers at Philadelphia's Lincoln Financial Field.

Ertz joined Philadelphia as a second-round pick in the 2013 draft and has 579 receptions for 6,267 yards and 38 touchdowns in 123 career regular-season games.

He also caught the winning touchdown pass in the fourth quarter of the Eagles' 41-33 victory over the New England Patriots in the 2018 Super Bowl.

On his departure, Ertz said: "What a journey it's been. What an amazing journey, what an amazing eight-plus years, nine years here.

"Obviously I'm extremely excited to be going to the Arizona Cardinals and play with a team that is rolling right now and be able to add my skill set to that team." 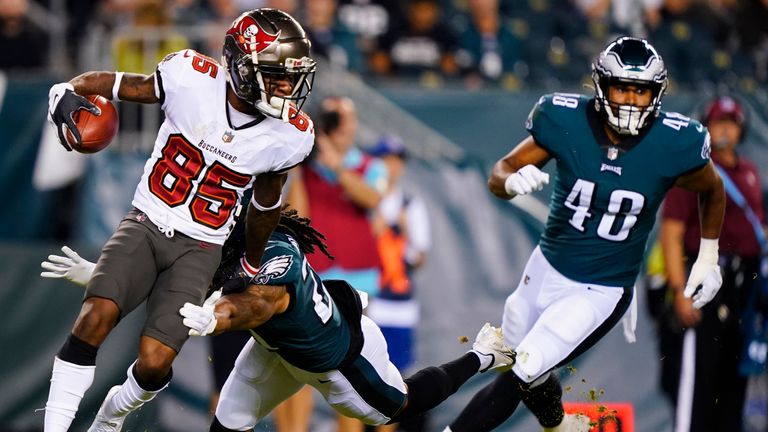 Eagles chairman and CEO Jeffrey Lurie added: "He (Ertz) will always be a member of the Eagles family, not only because of what he accomplished on the field, but also because of the wonderful person, dedicated leader, and exemplary role model that he was for nine seasons in Philadelphia."

Although not eligible to play this Sunday when Arizona (5-0) visit the Cleveland Browns (3-2), Ertz is in line to take over for the injured Maxx Williams who is out for the season with a knee injury suffered in last Sunday's 17-10 victory against the San Francisco 49ers.

Meanwhile, Gowan was selected by the Cardinals in the sixth round of this year's draft with the rookie yet to appear in a regular-season game,