Joe Burrow threw for a career-high 416 yards including 201 courtesy of Ja'Marr Chase as the Cincinnati Bengals sent a message to their rivals with a 41-17 victory over the Baltimore Ravens to move to 5-2.

Chase lifted his tally on the year to 754 receiving yards, marking the most through the first seven games by any player in NFL history, while tight end C.J. Uzomah caught two touchdowns before the Bengals turned to their ground game to bury the hosts in the fourth quarter.

Lamar Jackson was sacked five times as he finished 15 of 31 passing for 257 yards and one touchdown alongside his 88 rushing yards, the Ravens offense finishing five of 16 on third down conversions and one of four on fourth down conversions, two of which from their own half had paved the way to decisive Bengals touchdowns.

For all that the pre-game build-up had hailed Jackson's lightning start to the campaign and Burrow's downfield connection with Chase, it was the stern defense that dictated the narrative early on as both teams managed just 124 first-quarter yards between them after four punts.

After a field goal apiece, the respective play-callers began to engineer some space in the second quarter and it was Burrow who struck first when he found Uzomah for a 55-yard score before Devonta Freeman's rushing touchdown levelled things up.

Jackson connected with Marquise 'Hollywood' Brown for a 39-yard touchdown on the first drive of the third quarter, to which the Bengals responded through a 32-yard score from Uzomah for his second of the day followed by a glimpse of Chase's yards-after-catch explosiveness as he burst clear for an 82-yard touchdown to give the visitors a 27-17 advantage.

Cincinnati strengthened their grip on the game in the fourth with a third successive touchdown drive courtesy of Joe Mixon's 21-yard run to punish the Ravens' inability to convert on fourth down in their own half. Three straight scoring drives then became four when Samaje Perine glided through the tackles for a 46-yard touchdown and a 41-17 lead to put the game to bed. 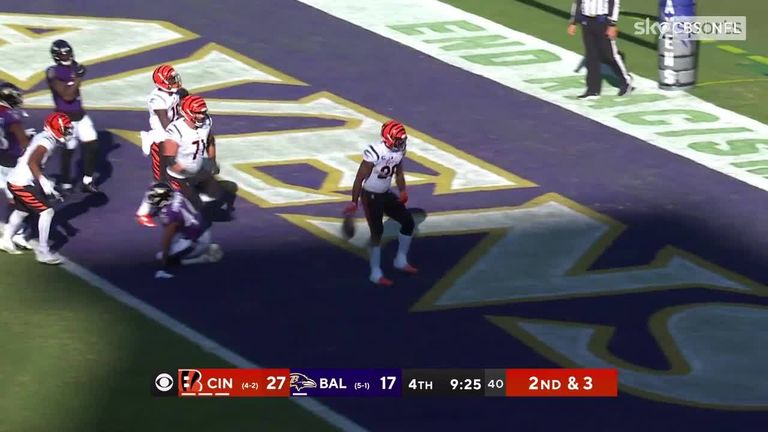 It may not have been Chase, but it was a field-stretching bomb from Burrow that brought up the game's first end zone visit in the second quarter when Uzomah hauled in the deep pass before scooting clear of Marlon Humphrey for a 55-yard touchdown to punish Pernell McPhee's roughing the passer penalty on the previous play.

Baltimore hit back immediately as Freeman punched in a one-yard score at the end of a 10-play 75-yard drive that had seen Jackson connect with rookie Rashod Bateman for 20 yards before scrambling for two third-down conversions.

Jackson provided the latest instalment of his improved passing prowess with a 39-yard dime into the bucket for Hollywood Brown, who did superbly to get his toe in at the back of the end zone and finish off the first drive of the second half. 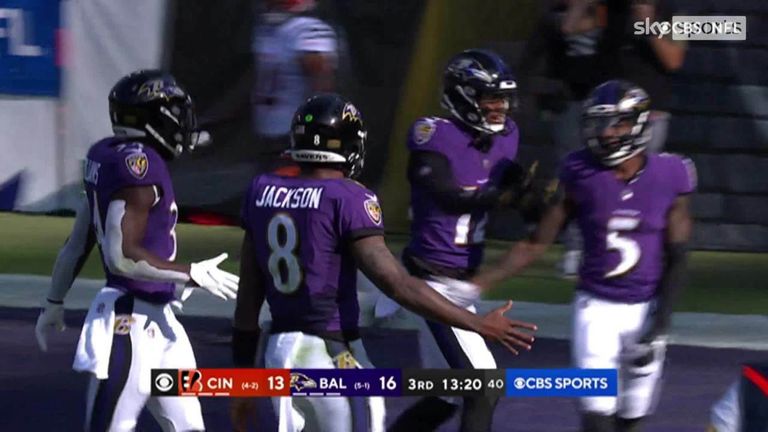 Back came the Bengals to punish a blown coverage as three Ravens defenders were lured into the flat to leave Uzomah one-on-one against Deshon Elliott, the tight end burning the high safety on his post-route for a 32-yard touchdown.

Then came the turn of Chase, who underlined why he is widely considered the Rookie of the Year frontrunner with an 82-yard catch-and-run to the house after leaving Humphrey on ice and riding three tackles to break free for his sixth touchdown on the season.

Burrow's first real blemish on the day came on the second play of the fourth quarter when he was intercepted by Humphrey in the end zone while targeting Chase on third-and-goal, with the Ravens claiming their fourth red zone takeaway of the season.

Jackson thought he had ignited the Ravens' ensuing response with a 39-yard scramble only to be pegged back by a holding penalty, the drive eventually stalling as Baltimore failed to convert on fourth-and-seven from their own 38 with 11:43 to play.

Cincinnati took full advantage through Mixon's 21-yard run before matching three straight touchdown drives with a second straight fourth-down hold to frustrate Jackson and Ravens as they went for it in need of 15 yards from their 33 with eight minutes on the clock. Yet again they were able to capitalise, Perine this time finding the gap to sprint through for a 46-yard touchdown.

That prompted the Ravens to put Tyler Huntley into the game at quarterback in place of Jackson as they conceded defeat in the final minutes.

Next up for the Ravens is a visit from the Minnesota Vikings, while head to New Jersey to face a Jets team coming off the back of a 54-13 thumping against the New England Patriots.