NFL Fantasy: Thanksgiving thanks to the Houston Texans defense, predicting a big night for Tony Pollard, and pick up Cam Newton!

Live coverage of the NFL's Thanksgiving Day action begins on Sky Sports NFL from 5pm on Thursday, with the Chicago Bears taking on the Detroit Lions (6pm), followed by the Las Vegas Raiders at the Dallas Cowboys (9.30pm) and the Buffalo Bills versus the New Orleans Saints (1.20am)

A Thursday night feast of football (and hopefully some food) lays ahead of us with three holiday games to kick off the Week 12 slate in the NFL. We're barrelling towards the Fantasy Football playoffs too, so picking up points and planning ahead is key as we cross over into the holiday season.

Along with the Arizona Cardinals and Kansas City Chiefs, NFL Overtime is on a bye this week. Stellar company, right? But we've still got you covered with some potentially useful fantasy advice and one shocking endorsement of a team that has (probably) not been mentioned through 11 weeks of Fantasy Football.

Spare a thought to those who found themselves in a fantasy match-up against Jonathan Taylor last Sunday (or indeed in two such situations…no, I'm not bitter): five touchdowns, over 200 total yards, 53.40 Fantasy points! And a hat very much thrown into the MVP ring.

He may have been a hot and cold fantasy prospect last year but this year JT is on fire, particularly with the Indianapolis Colts reliance on the run game in recent weeks. They host the reigning champs, a.k.a 'Tom Brady's Tampa Bay Buccaneers', this Sunday, who have the league's best run defense and so a trickier day ahead for Taylor, but he's still RB1 and now the highest scorer in all of Fantasy Football. Don't panic over the match-up and drop him (because I know someone will).

If you're looking for a sleeper to get you up and running on Thanksgiving Thursday, it could be Tony Pollard's night. Ezekiel Elliot is struggling with his knee. The Dallas Cowboys passing game is depleted with CeeDee Lamb battling a concussion and Amari Cooper out with Covid-19. Plus, Joe Mixon ran riot against the Las Vegas Raiders run defense last week, which all adds up to increased usage for Pollard.

Meanwhile, in a must-win game for the Buffalo Bills against the New Orleans Saints, Cole Beasley should see a lot of targets. The Saints defense is solid and they'll be all over Stefon Diggs, so Beasley should capitalise as Buffalo look to make use of his chemistry with Josh Allen.

I can't believe I'm writing this after what we've seen over the first 10 weeks of the season but... there is an upside to picking up the Houston Texans defense in Week 12 as they take on the New York Jets on Sunday.

In case it passed you by, the Texans beat the AFC leading Tennessee Titans last weekend, thanks in no small part to five defensive takeaways. They also held the Titans to no score through the first half. (A very bad week to have Ryan Tannehill as your quarterback, by the way... no, I'm still not bitter).

So coming up against the 'offensively challenged' Jets, and with rookie Zach Wilson back under center for the first time since Week 7, an offensive line that let the guy get sacked 15 times in three weeks (although one which has improved a little), and the guys in green giving up more fantasy points to defenses than any other team, I'll say it again: Texans defense for Week 12.

And, if you're really feeling it, Rex Burkhead will likely see a lot of volume against a Jets D that leads the league in fantasy points given up to running backs. They also give up a ton of points to quarterbacks, and with Tyrod Taylor's added running ability, he is a viable option if you're down a QB this week.

Last week I wrote, "Cam Newton isn't a guaranteed fantasy success but worth a punt". Then Lamar Jackson was inactive for the Baltimore Ravens, so fantasy players flocked to pick up the Panthers QB1, who repaid the support to the tune of 235 yards from scrimmage, three touchdowns and 26 points! His running ability alone makes him a great fantasy prospect, yet he is still (at the time of writing) available in half of Fantasy Football leagues on NFL.com! WHAT!? 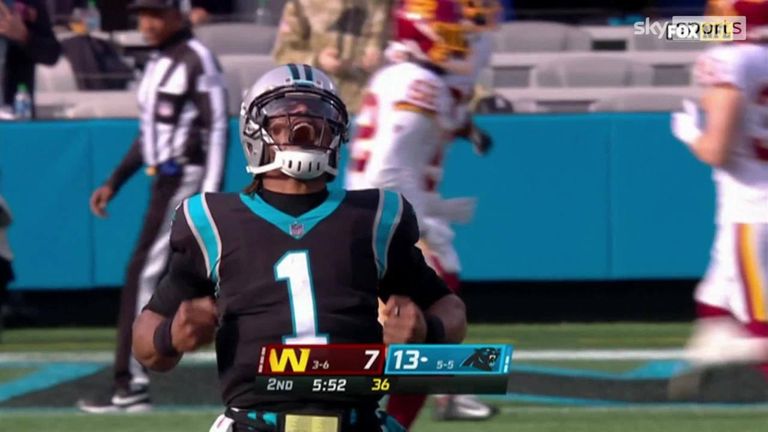 For further context: Newton plays the Miami Dolphins this week before a Week 13 bye and Week 14 matchup against the Atlanta Falcons. In week 14, the Philadelphia Eagles are on a bye and so that means no Jalen Hurts, who is QB1 in all of Fantasy Football this season. At a time when playoff spots are on the line, do the math and pick Cam up.

The fact that the Jalen Hurts fantasy experiment is going rather well. I'm thankful for Cooper Kupp and his magic route running. I'm thankful (and somewhat amazed) that I'm 10-1 in the league I auto-drafted in. I'm thrilled that people can actually get together this Thanksgiving to watch football with friends, eat all the food and drink beer from the helmet hats with the twisty straws. I'm thankful for the wild ride that is the NFL in 2021, for the entire team that make Sky Sports NFL what it is, and that by some glorious twist of fate, chatting about this sport that I fell in love with is my actual job.

And coffee. I'm thankful for coffee!

Live coverage of the NFL's Thanksgiving Day action begins on Sky Sports NFL from 5pm on Thursday, with the Chicago Bears taking on the Detroit Lions (6pm), followed by the Las Vegas Raiders at the Dallas Cowboys (9.30pm) and the Buffalo Bills versus the New Orleans Saints (1.20am).